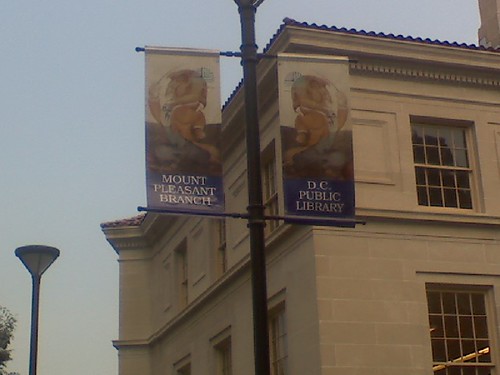 At the Board of Library Trustees meeting Wednesday night, July 23,
2008, Chief Librarian Ginnie Cooper presented a grim picture of the
FY2009 Library Budget and staffing plan. While the Library Budget
will go up slightly (by $16,000), that budget includes $5.6 million
in earmarked enhancements and the elimination of 74 library
positions. This is a 14% reduction in the staffing for DC Public
Libraries. The DC Public Library needs $2 million by October 1, 2008
or the Library will be forced to drastically cut the hours of
operation of all our libraries.  Continues after the jump.

Mrs. Cooper laid out the changes to the Board and the community. They
include closing all Libraries on Fridays, reducing basic operating
hours to 10:00 am – 6:00 pm at all branch libraries and opening 12:00
pm – 8:00 pm on days when libraries are open in the evening. Regular
hours at the MLKJr Library would also change to 10:00 am – 8:00 pm.
All libraries would remain open on Sundays during the school year but
would all be closed on Sundays during the summer months.

There are a number of impacts that these changes would create:
community groups would have difficulty holding meetings that must end
by 8:00 pm; daycares and caregivers would have difficulty using their
libraries in the mornings when they open later or not until noon;
seniors will not have an opportunity to use the library consistently
in the mornings; working families would have reeduced access to the
library during the summers and commuters will find it difficult to
get to their branches by 8:00 pm on the nights their library branches
are open.

The Library System needs your help to appeal to the District Council
to find the $2 million that will avoid this calamity. A number of
things converged to create this problem and a number of promises have
been broken along the way by the Council and the Administration. Our
communities should not have to suffer the mistakes of our leaders.

Please, write to your councilmember today. Share this message in your
community, and let’s make sure our libraries remain open and
available to everyone in our community.