Get our email!
Search
Rental of the Day 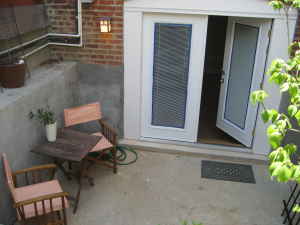 I like this one because of the advertiser’s description. A one bedroom “garden apartment” is available for rent in Mount Pleasant beginning July 1. What a romantic name for a home. I’ve generally referred to my various residences by the street name they were located, as has most of the people I know. Anyone have any original and/or quirkly names for their homes that don’t involve streets and numbers?

This place is high class–not only does it have the regular benefits the nicer places have–stainless steel appliances, central air, lots of light–but it comes with actual heated floors. As someone who lives in a poorly insulated house and spends the winter months in like, five layers of clothing, that sounds like quite the perk. Even beyond a perk–downright Jetsons-esque living.

The patio looks very lovely as well, though unfortunately from the angle doesn’t look very gardnesque. (I’m sure that’s something that can be remidied if the angle is actually what you get, however. Ah, garden apartment.) Rent is $1,300 plus utlities; the place is located at 18th and Kenyon. Rentals continue after the jump. 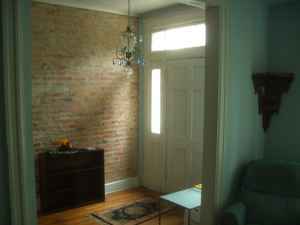 There’s something about this place that’s at the same time captivating to and also oddly unsettling. Maybe it’s the way the light hits the exposed brick in the foyer, or maybe it’s that the over-exposed picture of the red room is a little off–maybe the red is a little too red and why is there only one chair at the table? 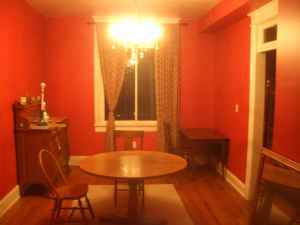 Anyway, there’s just something about this place. It’s $2,700 for a three bedroom, one-and-a-half bath two-level rowhouse for rent near the Columbia Heights metro at University Place and Euclid. It’s also really close to Meridian Hill park, which is, in my opinion, one of the most magnificent parks in the district.

The open house is this Saturday from 1 to 3, so you can see for yourself if it’s something about the house or just the pictures of the house. 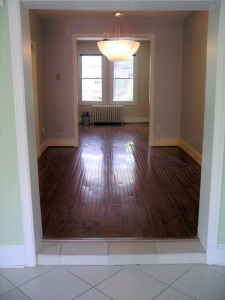 As I’ve said many times before, the details and extras are what makes the house. This one has plenty of both–two off-street parking spaces (and unzoned street parking, ah, just like in the ‘burbs), a front garden, sunroom, skylights, and a freakin’ home theater! A wall-sized screen, projector, and comfy couch make up what must be the most blissfully mind-numbing room in history. The house also has a breakfast room, which is apparently separate from the dining room. (What’s the difference between a breakfast room and a dining room? One faces the east and the other the west?) $2,495 for a four bedroom at longfellow and 6th. 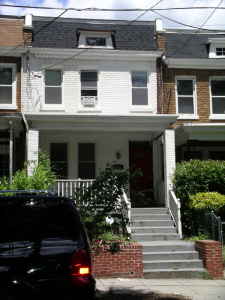