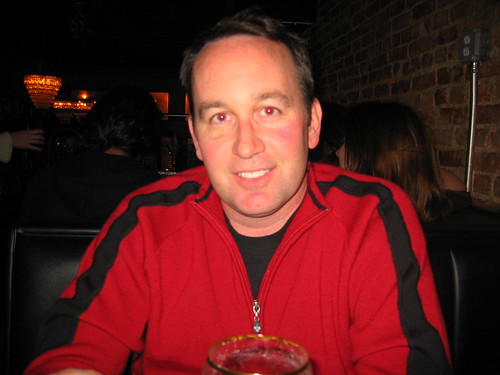 It is my pleasure to introduce you to one of the main forces behind many of the new developments in the U Street, Columbia Heights and Petworth neighborhoods. Mr. Donatelli was kind enough to sit with me for a few hours at the Looking Glass Lounge last week. We spoke about his earlier projects in U Street, his ongoing projects in Columbia Heights and his upcoming projects in Petworth. This is really an exciting time to be living in these neighborhoods and after speaking with Donatelli I am convinced that we are going to see many more positive developments in the near future. A little taste : Get ready for up to 8 new retail options on Georgia Avenue, near the metro, that could include restaurants like a Hank’s Oyster Bar and The Heights! You’ll be able to make your voice heard in the comments section to let Mr. Donatelli know your retail/restaurant preferences. Profile continues after the jump.

Donatelli, 40, is married with three children and grew up in Bethesda, MD and went to Gonzaga High School in the District. (Interesting to note is that Mr. Donatelli’s mother grew up in Petworth on Varnum Street.) He did his undergraduate work in Finance at Villanova University and received a Master’s in real estate from American University. After graduate school Donatelli worked for 4 years for a company that developed power plants in Latin America and Asia. Despite enjoying the experience Donatelli left the company to joint the family business, originally called Donatelli and Klein but now known as Donatelli Development.

“My First Project Was a Failure”

In 1995, Donatelli’s first project involved four lots in Prince George’s county. He built one house with the hopes of building three more on the additionally lots. However, Donatelli was unable to sell the first house and ended up selling it and the three remaining lots at a loss. He calls this experience earning his PhD.

Donatelli’s first big success was the Harrison Square property located at 13th and V St., NW. Donatellis explained that this was the location of the old children’s hospital. The hospital had been abandoned and fenced for 20 years and was owned by the city. It sat on over 2 acres of land and “it was dragging down the U Street neighborhood.” Getting development rights for the property proved to be an interesting process.

Donatelli simply went down to the Department of Housing and researched available properties. At that time (1995-1996) there were no condominium projects being developed. So Donatelli drove around the numerous properties that were available and decided to go after the old Children’s Hospital. The city put a bid out but Donatelli was the only group to respond. At the time, Donatelli recounts, “everyone thought we were crazy”.

Originally the plans were to include retail in the project. Donatelli attended an ANC meeting where a dozen highly committed residents showed up. They said that they really needed a grocery store. So Donatelli went to Fresh Fields (now Whole Foods) and they signed a letter of intent to place a grocery store at that location. Unfortunately for those residents Whole Foods eventually backed out of the deal and opened up their location on P Street. After exhausting discussions with “all the other grocery stores” Donatelli was unable to bring a grocery store to the neighborhood. At this point he decided to build 98 row houses on the property. The project was completed in 2002. The opening price for the row homes was $240,000 and 40 were sold in the first weekend that they were available. It was at this point that Donatelli realized that there was a huge demand for properties in this area.

Thus the Ellington was born. The Ellington is located on U Street between 13th and 14th Street. I was surprised to learn that it was extremely difficult for Donatelli to get financing for the Ellington project. He explained that the difficulty arose from the fact that the lenders had a difficult time believing that the neighborhood could sustain a luxury rental building. Donatelli’s instinct proved correct as the Ellington “has been successful right out of the gate” with nearly full occupancy since 2005. Like the 13th and V location Donatelli also engaged the community and learned of their desires for retail options. As a result, what was hard to imagine only five years ago, the area now hosts a Mocha Hut, Maggie Moos, Aleros, and Sala Thai.

On to Columbia Heights

Interestingly these projects initially were supposed to be rentals but again the lenders did not feel that high end rentals would be successful in Columbia Heights. Financing for Condos proved much easier for Donatelli at the time. Located on 14th Street, right across the street from the DCUSA project, Kenyon Square has 153 condos with 20% set at affordable rates. At the moment 70% have sold.

Highland Park was originally slated to be condominiums as well but Donatelli explained that “there was essentially too much product on the market”. As a result the Highland Park project, also located on 14th Street, was switched to rental properties. There are 229 units in the building and the first units are set to be occupied in three weeks or so.

The commonality of many of Donatelli’s projects are that they are located right above or near the metro. Donatelli explains that when the projects are located near the metro then “you are right at the center of these neighborhoods.” There has been lots of speculation as to whether new projects will remain condos or become rentals. Donatelli told me that the Park Place project above the Petworth metro is still set to be a condo project. He thinks the condos will be an attractive spot given all of the benefits the neighborhood currently has plus the added attraction of its proximity to the new developments in Columbia Heights. The Park Place project will be completed in 18 months and naturally he will have to assess the rental vs. condo market at that time. However, when pressed Donatelli believes that the project will remain condo.

In addition to the Park Place project, Donatelli is also behind a 49 unit condo building to be located at 3801 Georgia Avenue. Construction will start at this Georgia Ave and Quincy Street location very soon.

Donatelli sees the new retail that his projects offer as a great way to make the neighborhood happy. He believes the retail options are like an ammenity to his buildings and as such prefers tenets that will excite the community rather than those who can pay top dollar. Donatelli would love to hear from the community as to their preferences for the 6-8 retail spots available at the ground floor of the Park Way project. Currently a Mocha Hut is set to take one space but that still leaves 5-7 more. Donatelli would like to fill these spots with proven successes like Hank’s Oyster Bar or The Heights or other folks who have restaurant experience or have otherwise proven themselves. Donatelli believes his track record with earlier projects will help attract great retail options to this location. So take this opportunity to leave your preferences in the comments section.

Chris Donatelli spoke with passion about the U Street, Columbia Heights and Petworth neighborhoods. While, obviously, he wants his projects to be successful, I genuinely believe that he would like to make the neighborhood residents happy. When you sit with someone for almost three hours you generally are able to tell whether you are being pandered to or not. To me Donatelli came across as a sincere. And you know what they say – you can’t bullshit a bullshitter. Believe me, I am an expert bullshitter and I think that Donatelli’s upcoming projects, coupled with his passion and previous successes, will only add to and make our already awesome neighborhoods even better.