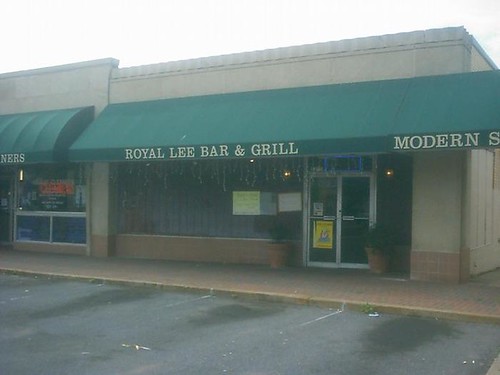 Why a little moderately rundown bar in Arlington that is soon to be torn down for a new complex? Well… I’ve only been living in DC for 4 and a half months now… I just moved up here from Auburn, AL where I went to undergrad at Auburn University… it was there I fell in love with a little place called “The War Eagle Supper Club”. This bar is so loved and cherished by students and alumni that on a good football weekend you might find half the bar filled with people over 30 (which is rare in this town…) and definitely find a line long out the door for until three or four in the morning… This bar was my favorite because I was friends with all of the bartenders and bouncers and they took care of me… I still send cards and postcards to the owner… and they still remember me as the girl that shut the place down every weekend to the tune of Red Peters’ “Closing Time” yet rarely got in trouble for passing out, starting a fight, promiscuous activity, or whatever else a lot of the girls around that late got themselves into. The hardest thing about moving to DC was I couldn’t find a bar that offered such a wonderful time, appropriate pricing, and yet still made me feel safe enough to have a few… And then I found Royal Lee’s karaoke night. This was the most fun my friends and I have had since any of us moved up here. The music selection was fabulous, the crowd was very entertaining, the drinks were reasonable, the bartenders were friendly, the bouncer was excellent… we couldn’t have been more pleased. Especially after discovering this place is walking distance from my house. Finally, the cherry on the sundae came when the bar was ready to close. It might not have been four or five AM as at The Supper Club, but Red Peters’ “Closing Time” came on. So few people have even heard of this song, let alone would play it, that when I called a buddy at the Supper Club to let him know, even they got excited about it.

This was the first experience I’ve had in or around DC where I went out for a fun night at the bar with friends, and didn’t come home feeling like I needed a shower (well, maybe I could have used one because of all the cigarette smoke, haha.).

So there you have it. Not very poetic, but certainly my favorite place in DC… at least for now.