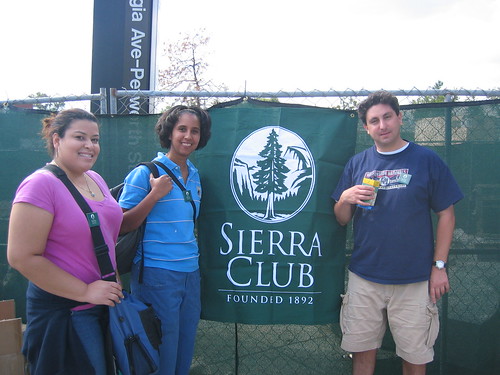 I ran into some folks from the Sierra Club outside the Petworth metro on Sunday. They were all volunteers on a mission to fight global warming. To that end the Sierra Club took a two block radius around the metro and handed out free energy saving light bulbs. When asked how they chose Petworth, they explained to me that Georgia Avenue is one of the proposed locations for new energy efficient streetcars which they strongly support. With the lightbulbs they handed out postcards that residents could mail to Mayor Fenty in order to encourage him to “provide DC residents with convenient, energy efficient alternatives to driving by ending the delays in the citywide streetcar plan”. Certainly a worthy cause.

To further raise awareness the Sierra Club is hosting a Beer Night from 7-9pm Tuesday, Oct. 23 at Temperance Hall. According to the flier they gave me “Enjoy Free Beer. Meet New People. Protect the Planet.” You can visit their Web site here.

They had me at Free Beer.