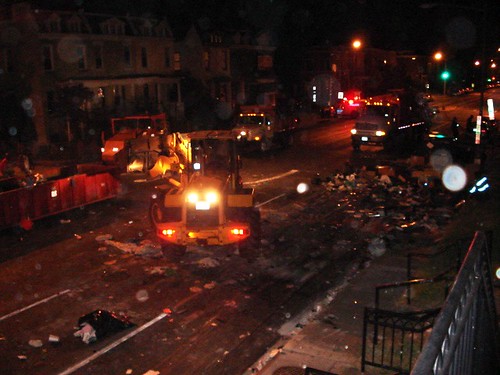 I see Wayan at DC Metblogs has already gotten some play on this but a reader has sent me some more photos and details on the situation. The reader writes:

“This was the 2900 Block of Sherman Ave, b/t Harvard and Columbia. The blue house was evicted and the city emptied the entire house on the street, which turned into one large free-for-all. About 9:30 p.m., all the bags had been turned over and the trash was across three lanes of traffic. This prompted the police to get involved, and public works was called in. They sent 4 street sweepers, two dump trucks, a bull dozer, a dumpster loader and a crew of about 25. From 10 p.m. to 3:30 a.m., the city was cleaning up the street.”

“It’s a real shame what happened. The woman who used to live there died two (maybe it’s three now) years ago, and left the house to her grandson. He and his cousin lived there with some other transient tenants, and I only know one guy who lived there the whole time in the basement….You should know all that trash was actually the dead grandmother’s possessions. Family albums, pictures, antique furniture, collectables, etc. — all that was her is now gone and lost forever. “

Read more →
More Stories
Neighborhood Cleanup on Sat. the 22nd on the 700 blocks of Lamont and KenyonMore Nice Landscaping