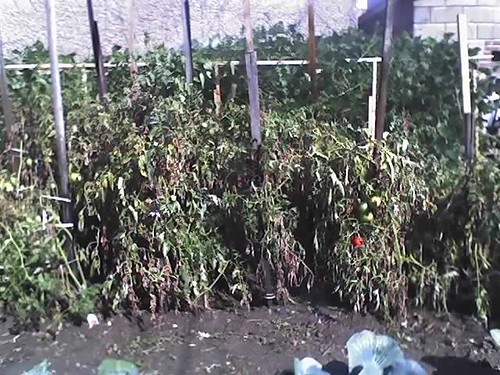 Yesterday was one of those beautiful Petworth days in all respects. The weather was beautiful and I decided to walk down to U Street to meet some friends for dinner. So as I’m walking down New Hampshire I notice a big spray of water coming from the alley. To satisfy my curiosity I had to check it out. I venture into the alley and I see an older gentleman probably in 60s watering his garden. My eyes go wide as I see all of the tomatoes he has successful grown. He is very skeptical when I approach him. He looked at me like I was crazy as I was ogling his garden. I asked him if I could take a picture of his garden. He replied “I don’t care, take a picture of whatever you want”, in not the most friendly tone. I was a little taken back. I quickly told him how amazing I thought his garden looked. At this point his eyes lit up for just a second and you could see him swell with pride. I then told him my woes about growing only two tomatoes and how they both got eaten by an animal. Without hesitating he walked over and plucked a handful of gorgeous red tomatoes and insisted that I take them. He told me he lived on the block for 35 years and has always had a garden. I was grateful for his generosity. I had so many more questions I wanted to ask him but he walked back to continue watering his garden. Well, I hope to catch him again to learn more about his gardening technique and to learn more about his experiences living in Petworth for the past 35 years. And yes, the tomatoes were delicious!