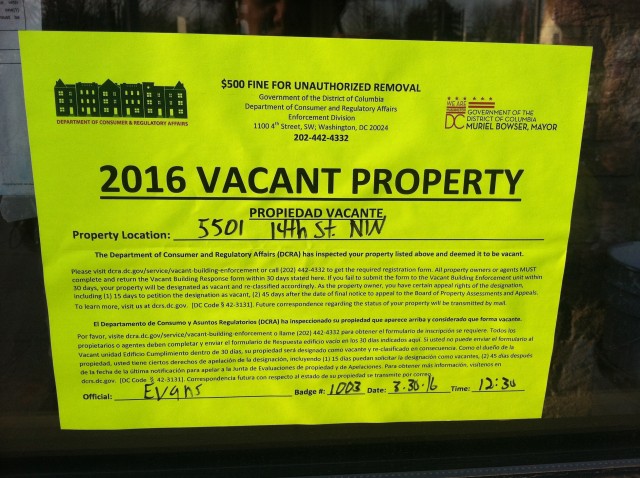 “This showed up on the window at Swampoodle yesterday. Is this a joke? Seems like city departments and council staff are clearly not speaking to each other. This is so frustrating, especially because the owner said he is very close to opening.” 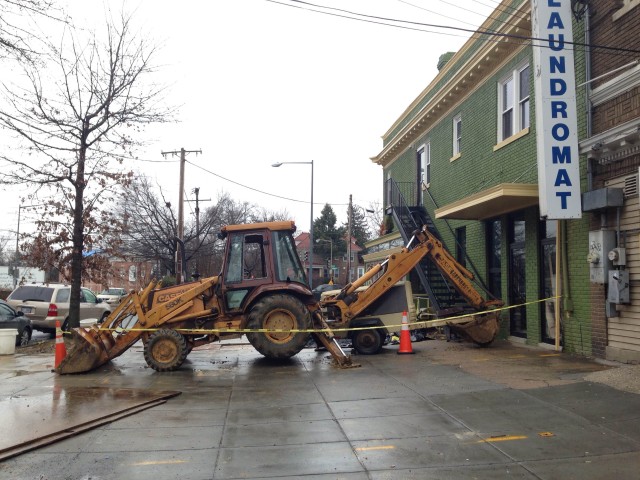 Do any readers have updates on Swampoodle? The lights were on this morning and lots of equipment was spread out inside but I didn’t see anyone. The sidewalk has been like this for a while now. I know they were having problems with the gas / water hookups. Any progress? This sidewalk condition is a hazard.”

“So the water line will be put in place next week.
However, although the city passed our gas hookup ( in July) we were informed that the gas line had been abandoned. So we need a new gas line to the property. The Poodle has no luck.
We replaced my mothers rosewood table with a bowling alley floor table which actually looks pretty good.
I am very disappointed with the City so if you wish to call Bowser and ask her to get the city to help open this restaurant before I go bankrupt I would appreciate it.

Happy holiday to everyone,
Thanks for your support. m

“It was months. But I just had to go thru the process.

Then last month came to replace the meter with a residential meter. Then they told me they had closed the line. So f*cked again

Sorry for my language” 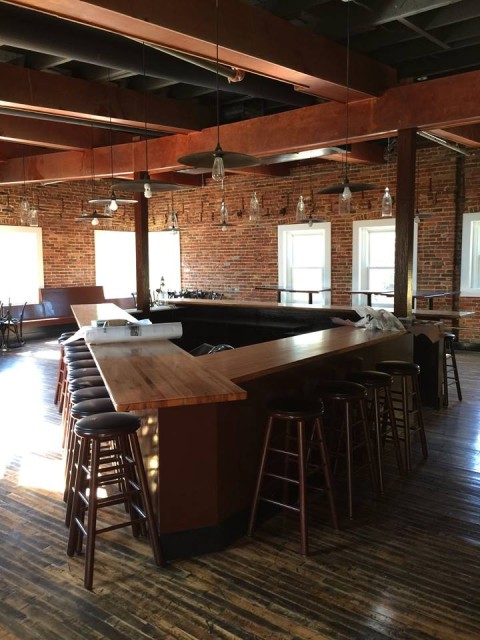 The overwhelming response was hell yes!!! From Swampoodle:

“THINKING OF HAVING AN OPEN HOUSE THIS SATURDAY FROM 10 AM TO 1 PM. WOULD THAT BE OF ANY INTEREST TO ANYONE?”

Swampoodle is located at the corner of 14th and Colorado Ave, NW. 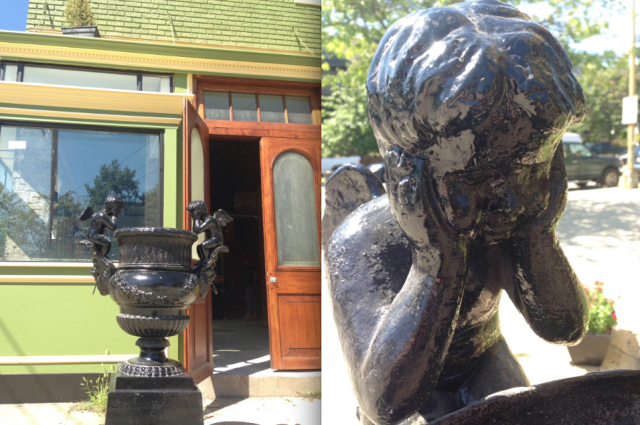 “Lots of activity at Swampoodle this morning. There was a big construction dumpster and the owner and his crew were getting rid of debris to clean up the place. Fingers crossed that it will open soon. These urns / flower pots are now out front and the cherubs look like they are done waiting do it to open too.” 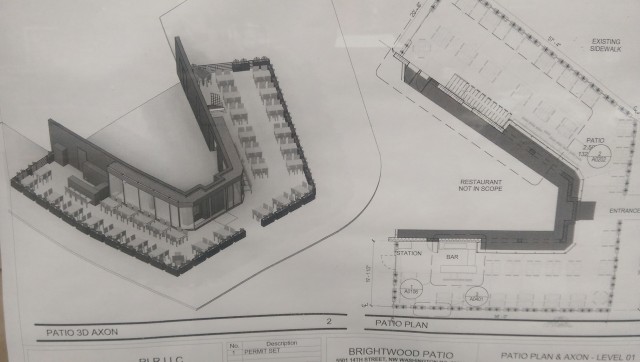 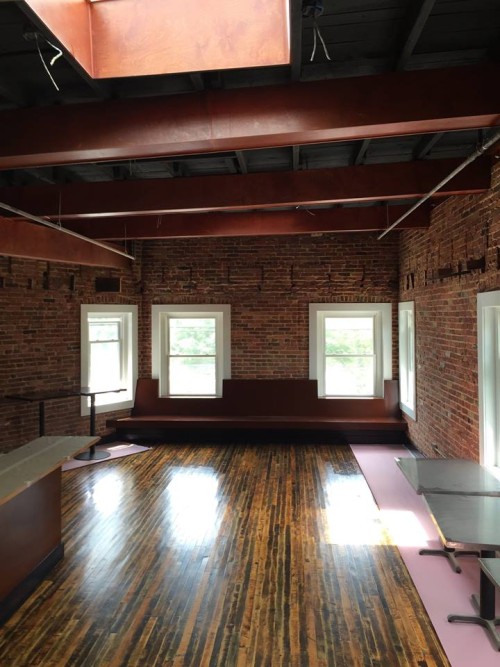 Ed. Note: When asked when they hope to open they responded on facebook: “-6 weeks to 2 months.”

“Word on the street is that Swampoodle finally got their permits from DCRA yesterday after a lengthy and inexplicable delay. There were people working all day today with the windows open and the boards gone, and they have gorgeous new photos of the upstairs posted on their Facebook page. There’s also diagrams posted on the doors on the Colorado Ave side showing the sidewalk seating plans and it looks great, with an outdoor bar on the 14th Street side.” 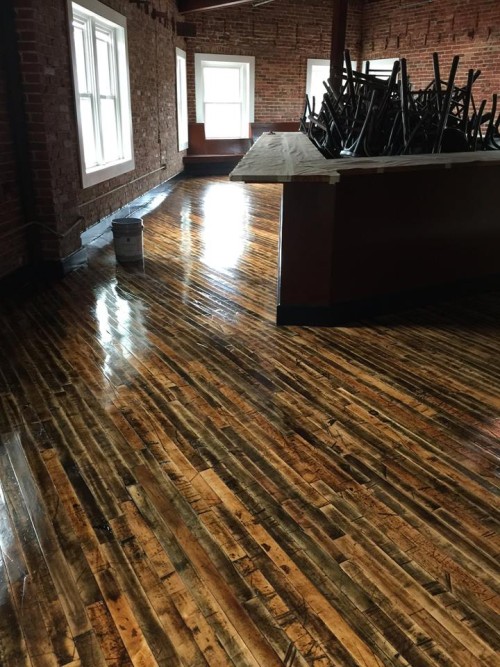 “Was walking the dog this morning, finally saw some progress on Swampoodle. I took the picture of them installing windows. These other pictures are from their Facebook. It’s looking awesome!” 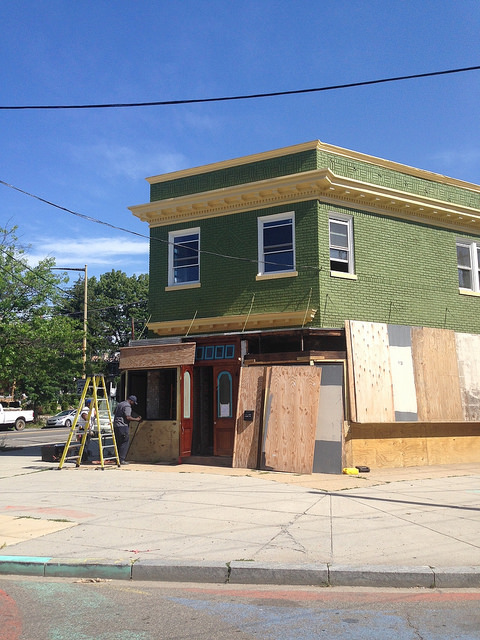 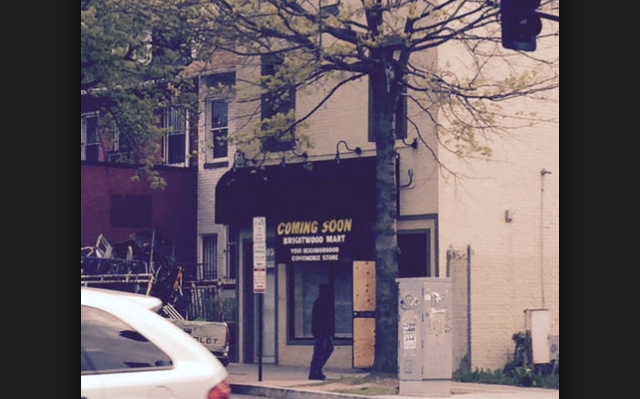 Coming Soon Brightwood Mart – Your Neighborhood Convenience Store. This is the former temporary Safeway pharmacy used while the new Petworth Safeway was being built. It’s at Taylor and Georgia across the street from the YES! Organic Market. Nevermind the name – I was just thinking we could use another good bodega on Georgia Ave… 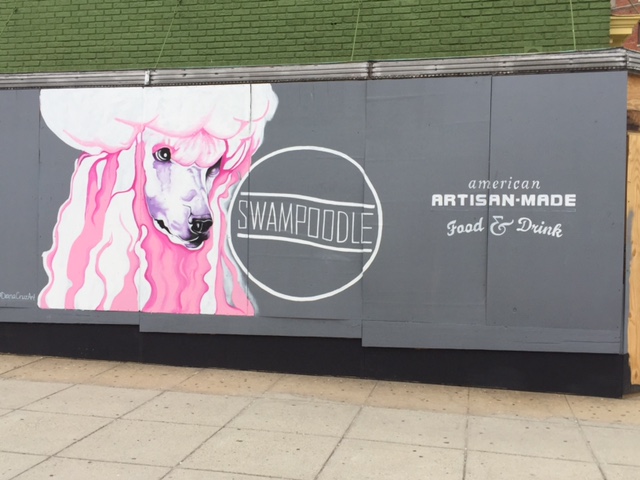 Thanks to a reader for sending a shot of Swampoodle‘s new coming soon signage. Their facebook page says:

and they also share a shot of the upstairs space:

“Our upstairs bar is coming along beautifully! What are you most excited to be served in this magnificent space? #comingsoon #newrestaurant #bar #foodie” 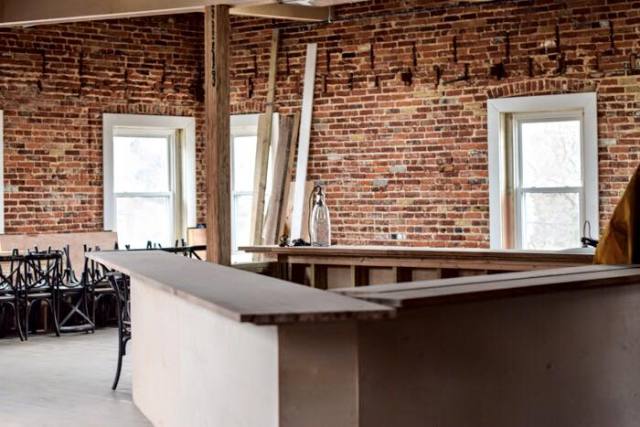 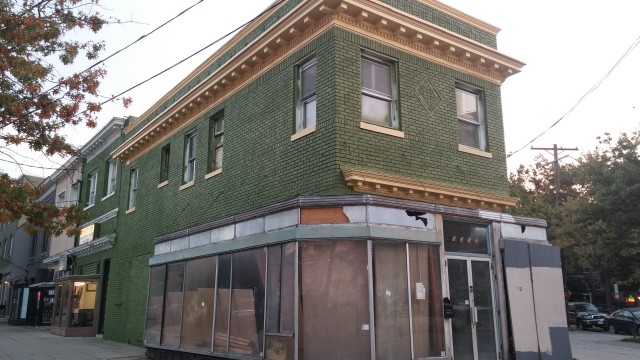 We’ve been waiting a long time to see what the heck is going on with the old cleaners at 14th and Colorado Ave, NW. Brightwood Bar and Restaurant out – Swampoodle in! Their Facebook page says:

“Hey ‪#‎DC‬! We are working hard to bring you an exciting new restaurant to the area! Follow along as we bring you updates from the ground up. ‪#‎new‬ ‪#‎localfood‬ ‪#‎comingsoon‬”

“We are eager for you to come join us at the bar for brunch! Delicious food and brunch cocktails await you.”

“On a bright and sunny DC day you and your family will love enjoying a meal on our outside patio!”

“Although it may not feel like it today, Spring is here and that means we are that much closer to opening our doors! We can’t wait for you to sit in our chairs and have a burger at Swampoodle DC!”

Nevermind that Swampoodle was an old neighborhood name nowhere near here (by Union Station today) – this sounds promising! Stay tuned.

Streets of Washington covers some of DC’s most interesting buildings and history and is written by John DeFerrari. John is also the author of Lost Washington DC.

The reputation of DC’s charmingly-named Swampoodle neighborhood was for its tough Irish street brawlers. Both the Irish toughs and their swampy ground are now gone, but one immense institution has remained there through it all, the Government Printing Office at H and North Capitol Streets, NW. The printing office—nicknamed “The Swamp” in its early days—has been one of Washington’s most contradictory institutions. Once a grimy factory of hard-working laborers culled largely from the surrounding rough-and-tumble neighborhood, for 150 years it’s also been an elite producer of elegant government documents, including extraordinary hand-bound volumes of the nation’s most precious records. The 1903 GPO building today (photo by the author).

There has always been a recognized need for printing official government documents; the British designated “publick printers” for this purpose in the early colonies. Benjamin Franklin was one, producing official documents for Pennsylvania, Delaware, Maryland, and New Jersey. After independence, the U.S. Congress continued the practice of chartering private companies to do public printing, usually at fixed rates, but as the 19th century progressed and the need for printed documents mushroomed, private companies fortunate enough to be designated as official printers were increasingly accused of fraud and corruption. Congress put an end to all that by passing a law establishing the Government Printing Office in 1861. It would be a completely government-operated facility, and its chief would carry the title of Public Printer.

To outfit the new GPO, the government purchased the printing office that Cornelius Wendell (1811-1870) had built in 1857 at the corner of H and North Capitol. Wendell had been an official printer, and most of the government’s printing work was already taking place at this site, one of the largest and most complete printing plants in the country.

Continues after the jump. END_OF_DOCUMENT_TOKEN_TO_BE_REPLACED