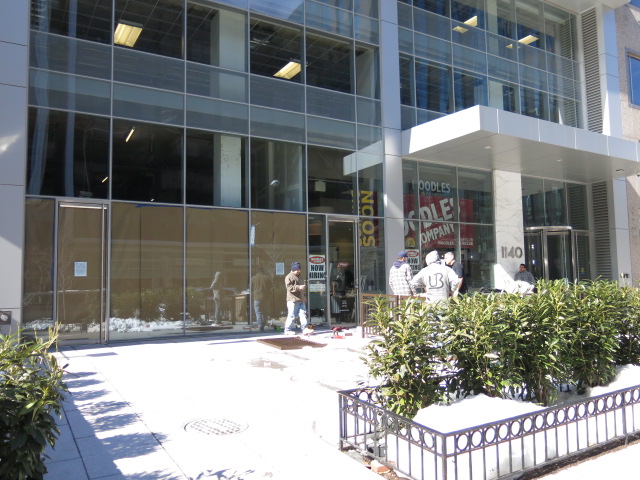 Earlier this month a reader sent word that Noodles and Company would soon be opening at 19th and L St, NW. They are having an invite only mock service today and open for real tomorrow.

Perhaps of greater interest is news of who is coming to the vacant space next door closest to Science Club – a permit on the door says that it will be a new restaurant, possibly to be called Greek Fresh. The workers also said they heard it would be a Greek restaurant. This is actually a very bold move considering one of DC’s best Greek options, Greek Deli, is located just down the block at 1120 19th St, NW. Updates as the buildout progresses and more info is know. 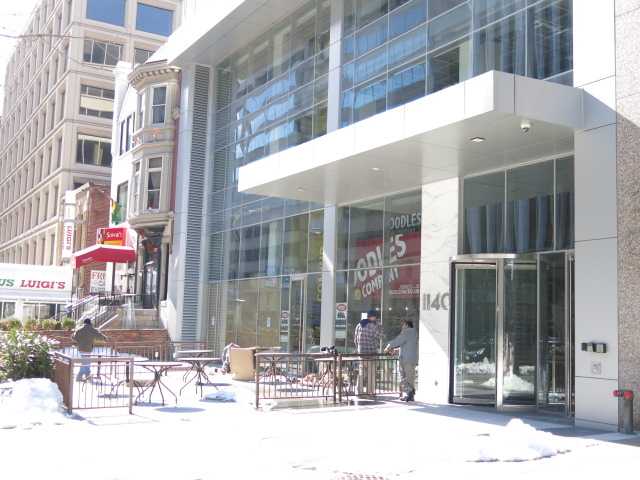 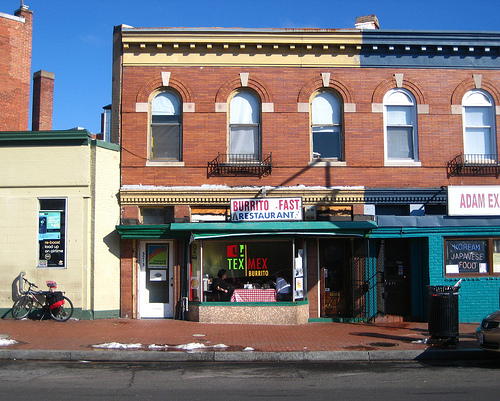 I’m not necessarily talking about Taco Bell, though of course that could be an answer, I’m more talking about where to grab quick, good lunches. While I really love Greek Deli on 19th St, NW I can’t stand waiting on line. So it got me thinking about what are the best lunch options around town where you don’t have to wait on line forever? Where’s your favorite fastest food? 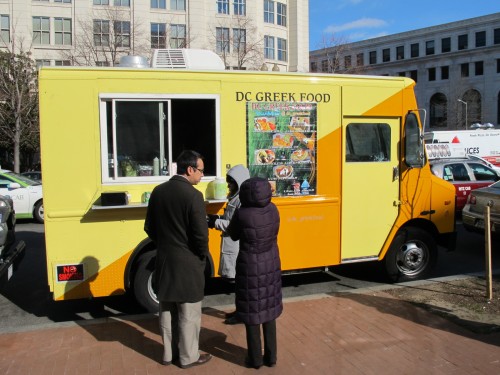 I’m always on the hunt for a good gyro – so I’m wondering what folks think of the DC Greek Food truck? How does it compare to gyros at brick and mortar spots like the Greek Spot or the Greek Deli?

Back in early Feb. 2012 I shared some scuttlebutt that Taylor Gourmet (Taylor’s) would be moving into the former Mixt Greens space, which closed in Dec. 2011, at 1200 19th Street, NW (just north of M St.) I’m happy to report that scuttlebutt is confirmed. Walking by the space yesterday you can see that demo has already begun. If all goes according to plans they will be open by July.

With the recent opening of G Street Food nearby at 1120 19th St, NW, not to mention the Greek Deli next door, this section of 19th St, NW continues to be a solid lunch destination. Byblos Deli is located at 3414 Connecticut Ave NW in Cleveland Park. I’ll be honest when I was eager for a gyro I’d just hit the now closed Yanni’s up the block. But the time has come to search for another delicious gyro in this neck of the woods. I’ve learned downtown Greek Deli is the way to go. But what’s the word on the gyros at Byblos? Any other good items to try out? You can see their menu here. 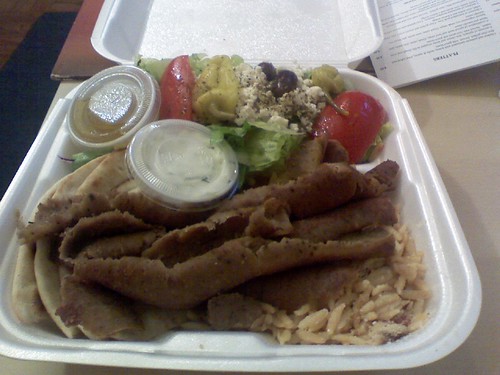 There’s a running joke in my family every time we go out to dinner. No matter what or who we are celebrating, everyone knows that my mother secretly wants to go to The Greek Village. And more often than not, that is where we end up. So, needless to say, I have many memories of meals shared with family at the little Greek joint in the strip mall in Commack, NY.

Even though I am not Greek myself, sometimes when I want a little “taste of home,” nothing will do but a gyro, or some spanakopita. I used to live in Cleveland Park, just a stone’s throw from Yanni’s – which became my go to spot. I often hit the Greek Deli, at 1120 19th St NW, during the work day but since I relocated a year and a half ago, trips to Yanni’s have been infrequent and I had yet to find a reliable Greek place close to home.

The other night, a craving hit, and I decided to finally visit the Greek Spot. It’s a little out of the way for me so it required a
special trip, but boy am I glad I made it! After work I took a walk down U Street all the way to 11th where just north of the intersection, at 2017 11th St, sits a hidden gem. Continues after the jump. END_OF_DOCUMENT_TOKEN_TO_BE_REPLACED