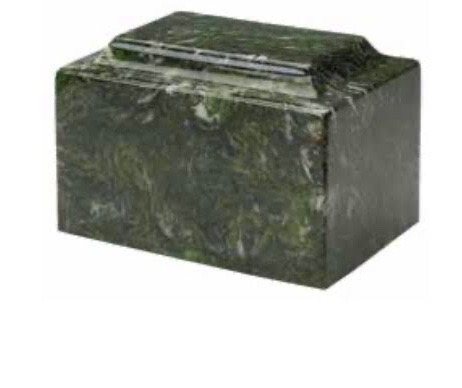 I am hoping that broadly disseminating my story to the faithful will generate some leads in helping me get through a terrible situation. My mother died a horrible death on a COVID-19 ward in San Diego recently. Due to the situation, I could not have a proper service and memorial so she was cremated, and her remains shipped to my home in DC. The US Postal Service delivered her remains and urn to the concierge desk of my building on 4/15/20, but I never received notification of it from them or my building. We searched for it for weeks. Nothing.

I was finally able to obtain security footage from my building for the day/time in question and was beyond devastated to see a man gained access to my building and stole the package containing my mother’s remains. END_OF_DOCUMENT_TOKEN_TO_BE_REPLACED

“Detectives from the Metropolitan Police Department’s Sexual Assault Unit have announced an arrest has been made in a First Degree Sexual Abuse and Robbery offense that occurred on Friday, January 27, 2006, in the 1900 block of 9th Street, Northwest.

On Wednesday, May 6, 2020, pursuant to a DC Superior Court arrest warrant, 43 year old, Landrell Jordan of Southeast, DC, was arrested and charged with First Degree Sexual Abuse and Robbery.” 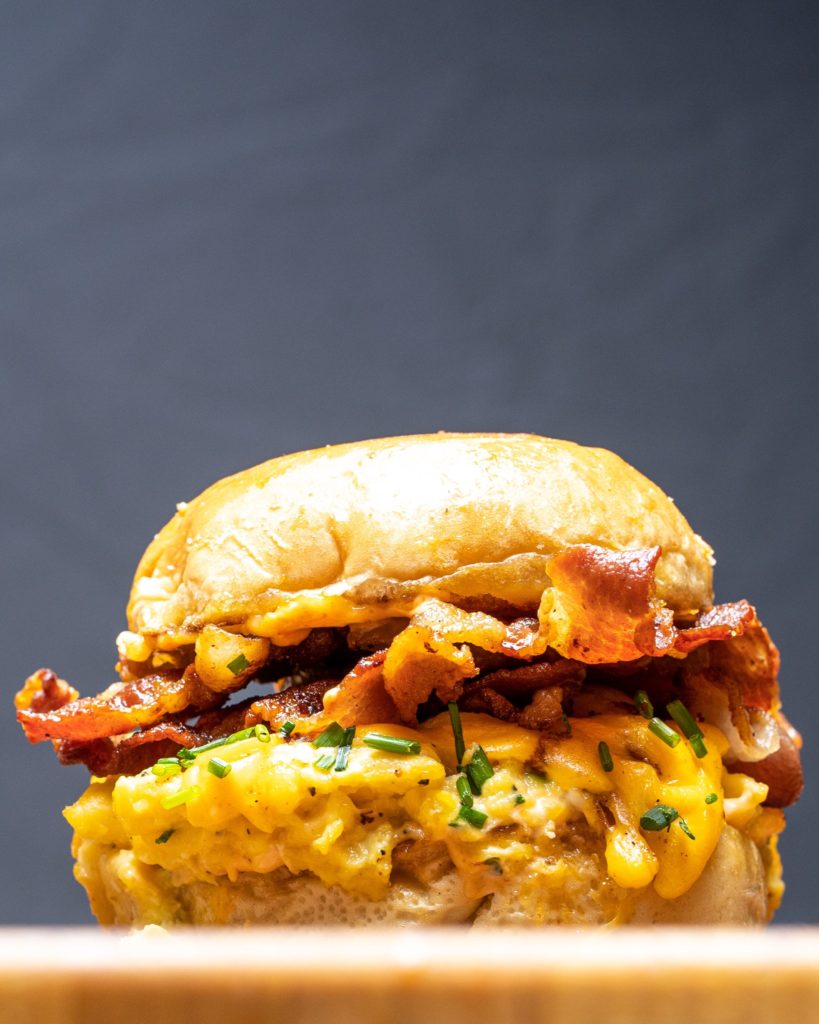 ‘The Bestie’ courtesy Butter Me Up

“HalfSmoke (651 Florida Avenue, NW), known for its gourmet, house-made sausages and signature wood-grilled entrées, is pleased to debut Butter Me Up, a new virtual kitchen pop-up to help meet the demand for additional breakfast options in the Shaw neighborhood of Washington, D.C. Spearheaded by Michelle Andrade, general manager & chief operating officer for HalfSmoke, Butter Me Up’s mission is to curate innovative, yet familiar breakfast staples while uplifting the community on a path to wellness and self-care. Beginning Friday, May 8, Butter Me Up will offer a rotating selection of breakfast sandwiches, coffee, tea and two boozy cocktails available a la carte. END_OF_DOCUMENT_TOKEN_TO_BE_REPLACED 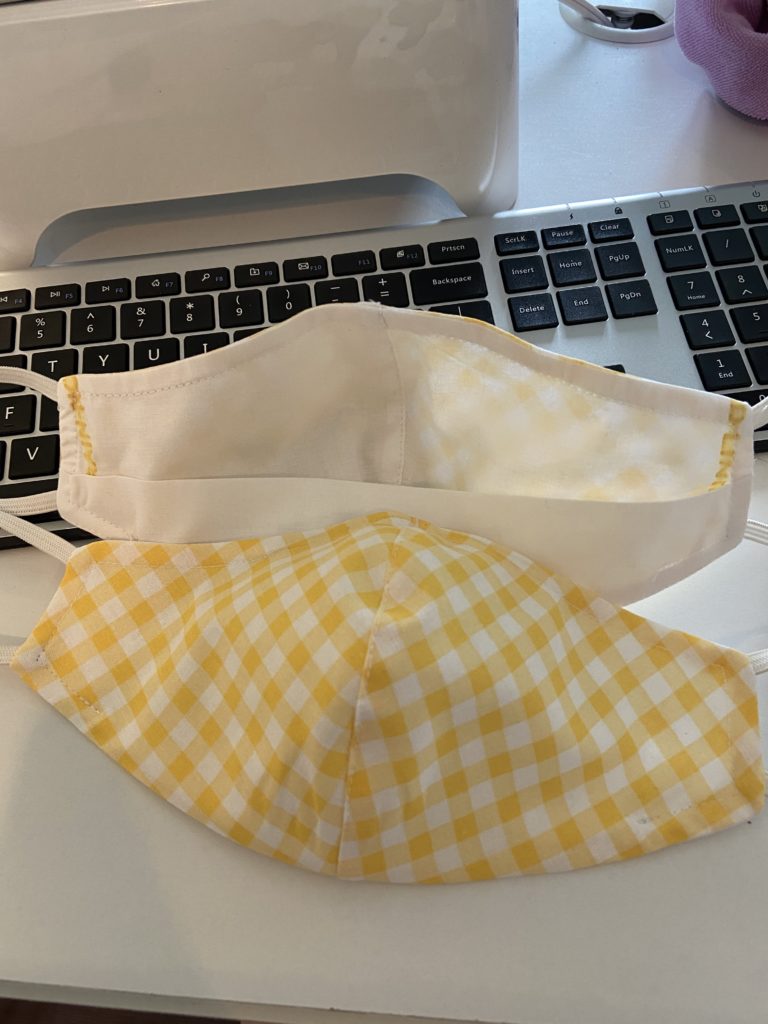 Thanks to Catherine for sending: “The super nice and friendly people at Red Valet dry cleaners (910 P Street, NW) in Shaw are selling some cute reusable face masks for $10 each. There’s a little pocket inside to put your “filter” in too.” 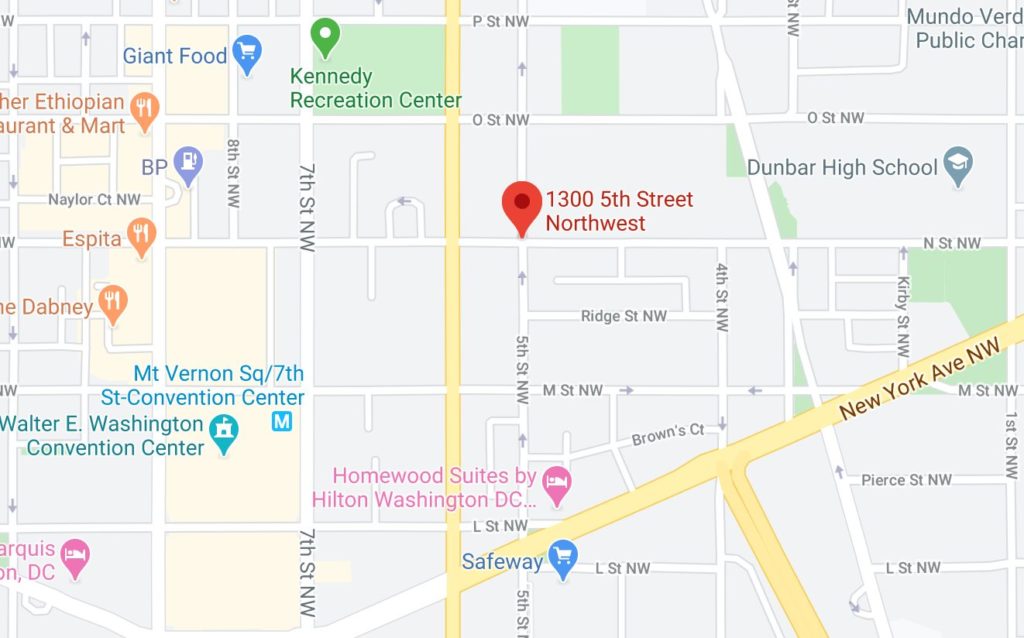 “The Third District is currently investigating a shooting in the 1300 block of 5th Street NW. An adult male has been transported to an area hospital with critical injuries to the lower body.

Motorists and pedestrians can expect road closures as we investigate. 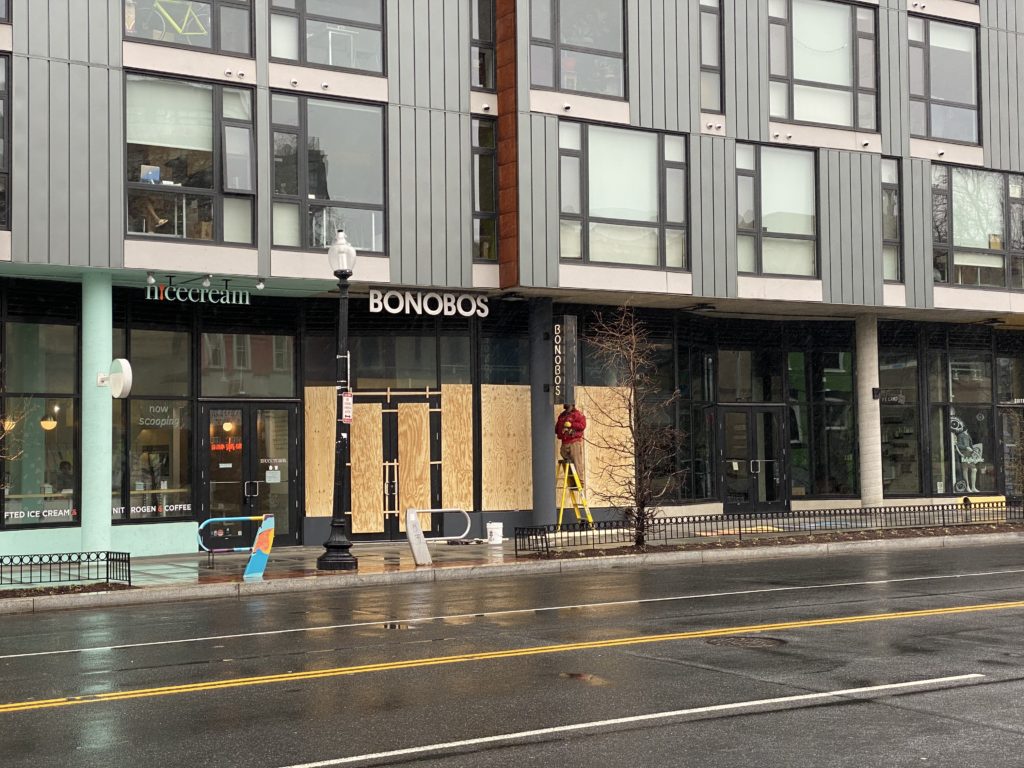 Thanks to Jay for sending another addition to businesses that are boarding up their windows.

Has anybody seen others besides Sephora (multiple), J.Crew (14th Street) and Loro Piana (City Center)?

Many others confirmed hearing the shots and Will captured the scene above noting a man was placed into custody. Since I didn’t see any official MPD reports apparently, fortunately, nobody was hit by the gunfire.

Earlier around 8:10pm MPD reported: “Alert: MPD is on the scene of a confirmed Shooting in the 3900 Block of Clay Pl NE. No Lookout Information.”

“On March 19, 2020, at approximately 1:25am in the 4700 block of 5th St NW, a male shot and grazed another male in the face during a dispute. The victim was transported to a local hospital and listed in stable condition. The suspect was placed under arrest for ADW Gun. The firearm was recovered, and there is no threat to the community.

This case is a great example of expedient police service and superb police work on the part of Fourth District members.” 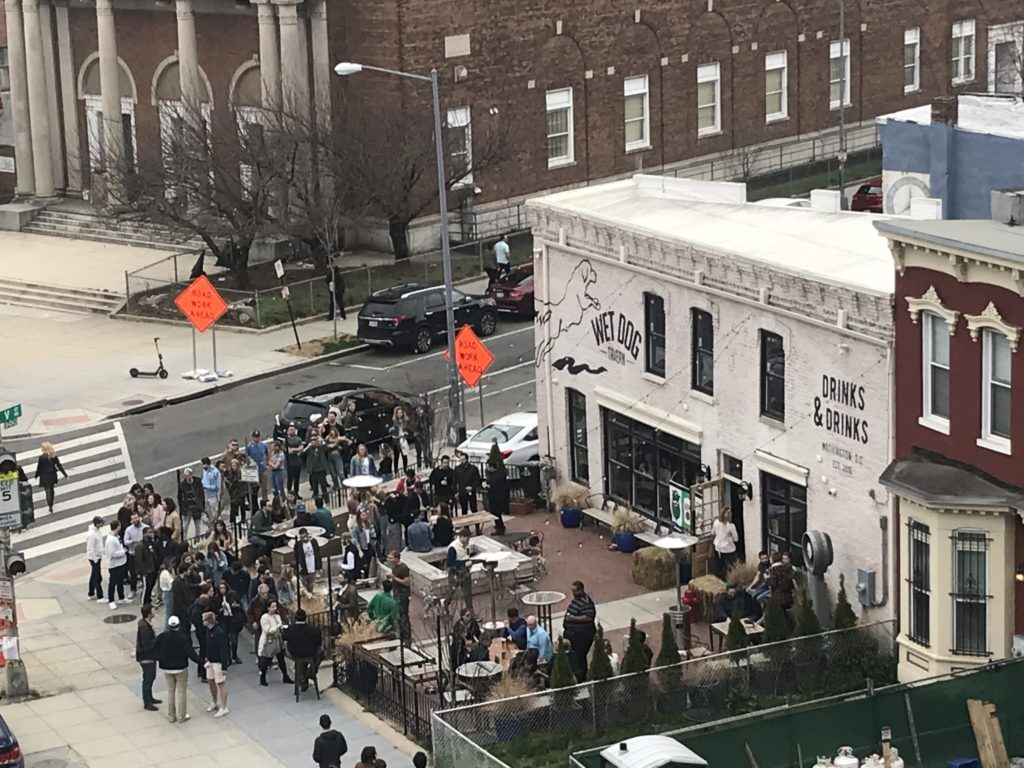 M. writes above: “Coronavirus can kill thousands but it can’t kill a party.” 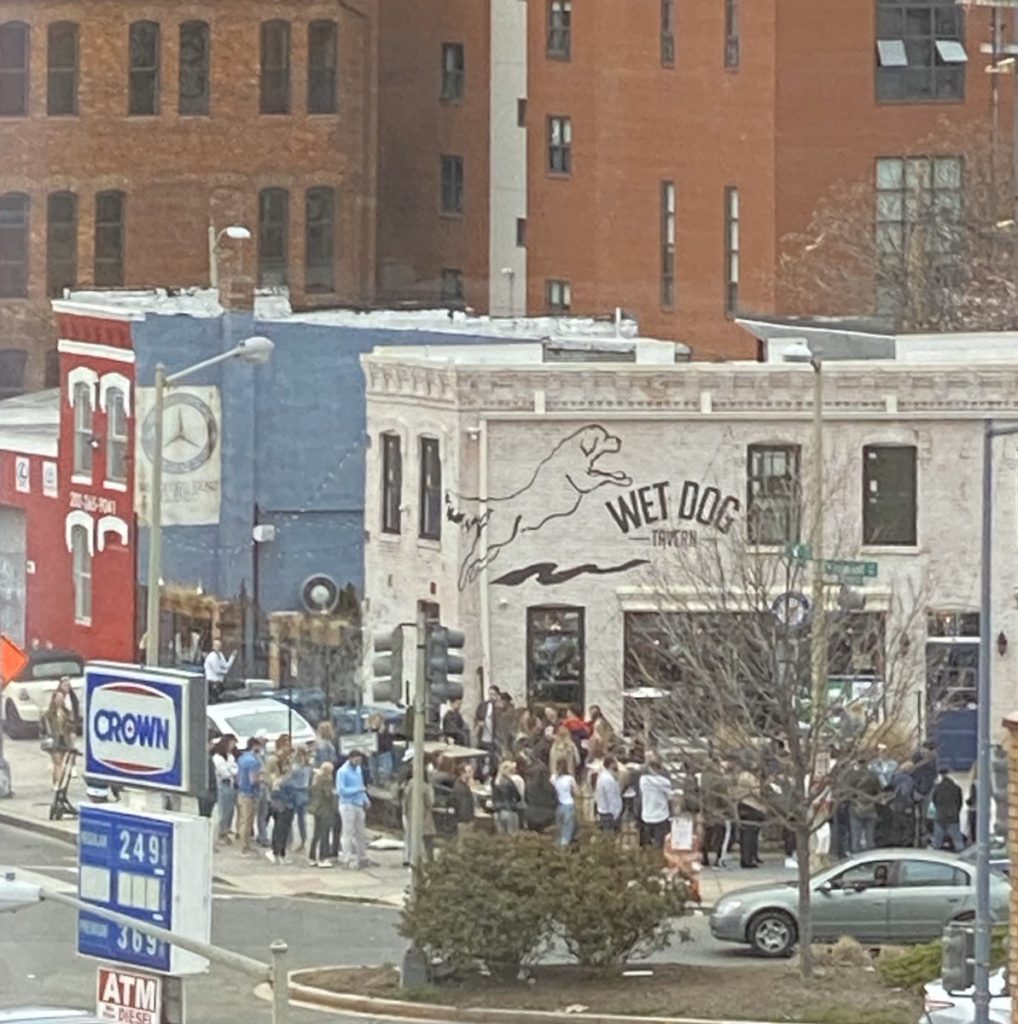 Another shot of the crowd above from J. 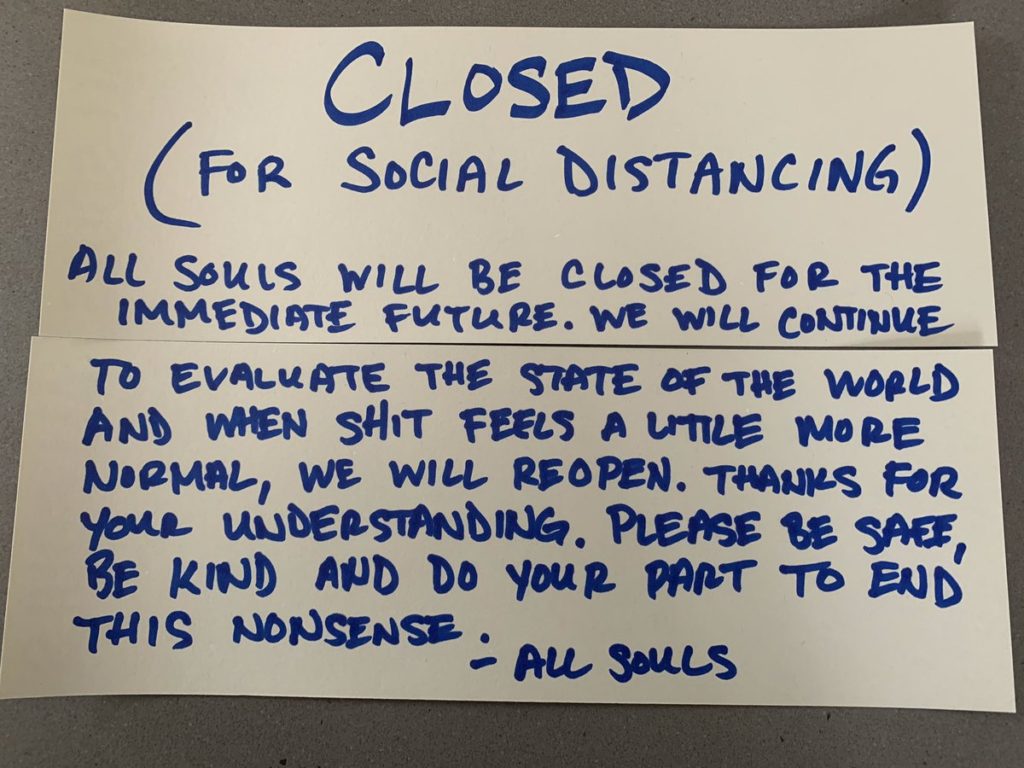 From All Souls (725 T Street, NW): “This was not an easy decision to make but All Souls will be erring on the side of caution and will be closed for the immediate future. We will evaluate this decision next week as the situation evolves.”

This was not an easy decision to make but All Souls will be erring on the side of caution and will be closed for the immediate future. We will evaluate this decision next week as the situation evolves.

We struggled between not wanting to over-react or under-react but the decision was finally easier to make when we remembered we’re a bar. The very thing we do is bring people together and right now that seems like a bad idea, especially with booze involved. END_OF_DOCUMENT_TOKEN_TO_BE_REPLACED 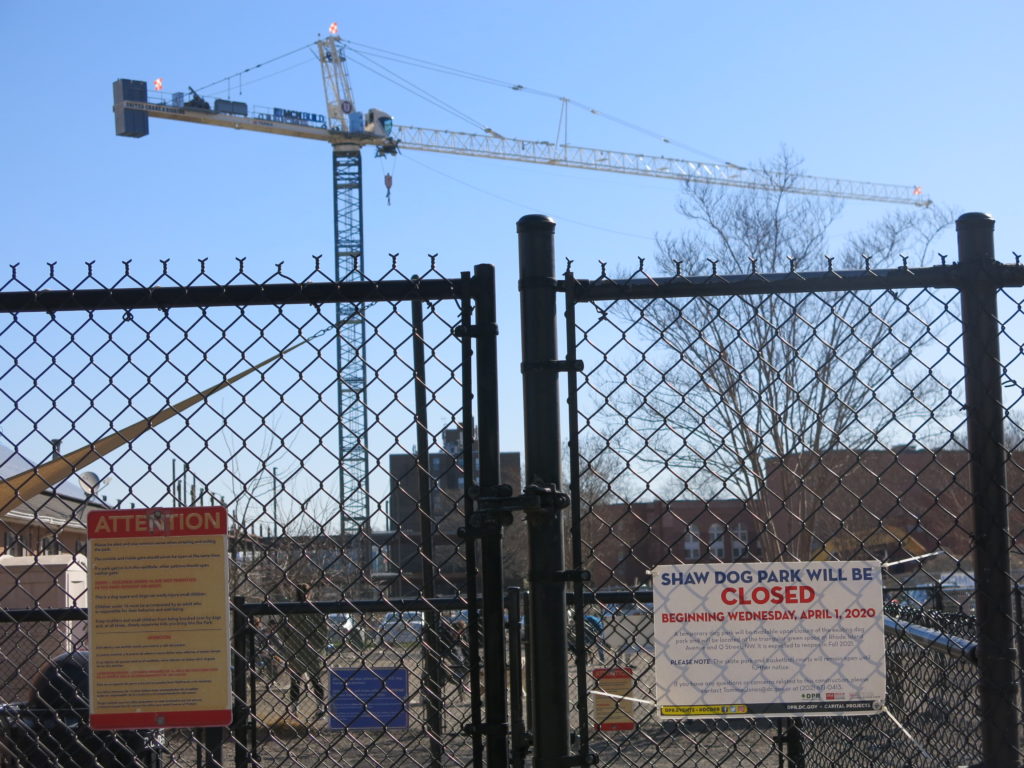 Thanks to Allison for passing on from the Shaw Dog Park Committee:

“Thank you to everyone who helped share your voice and concerns with DC Department of Parks and Recreation (DPR)! The agency informed us yesterday (March 6) that they will have a temporary dog park set up at the corner of Rhode Island and Q, NW (south of the skateboard park). That park will be ready for use starting April 1. We are told this park will have appropriate fencing and a double gate. They are still anticipating a Fall 2021 re-opening of the Shaw Dog Park at 11th and R NW. END_OF_DOCUMENT_TOKEN_TO_BE_REPLACED 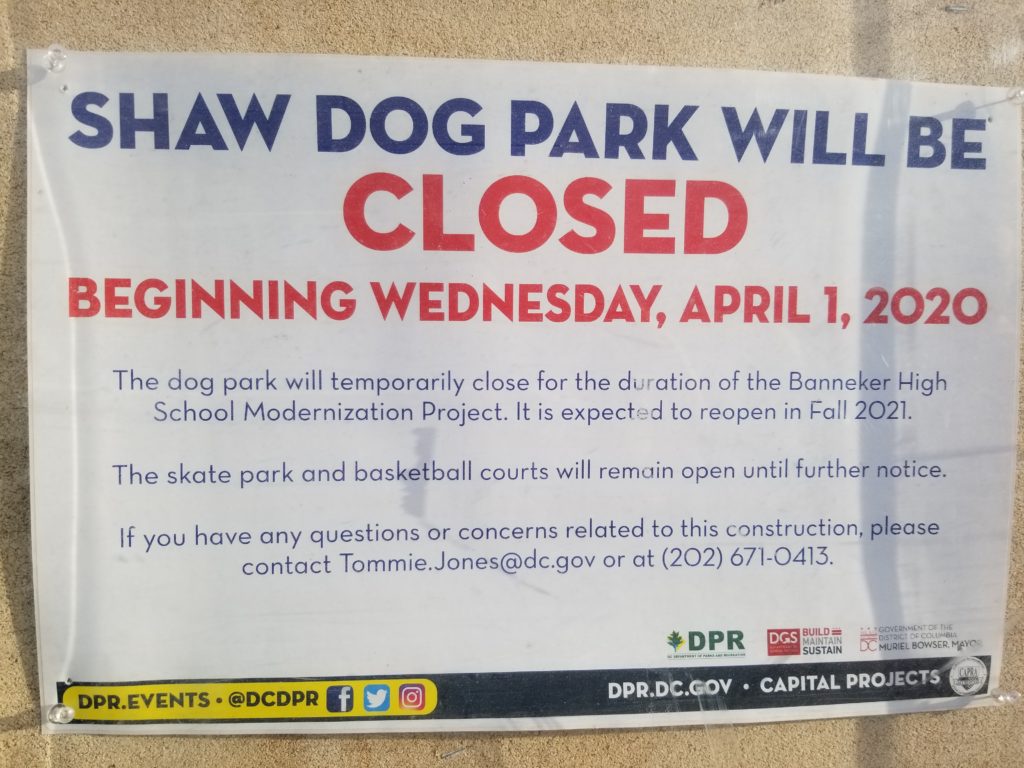 Thanks to A. for sending: “We need to press them to provide a good temporary space in the interim and better communications!”

“The dog park will temporarily close for the duration of the Banneker High School Modernization Project. It is expected to reopen in Fall 2021. END_OF_DOCUMENT_TOKEN_TO_BE_REPLACED