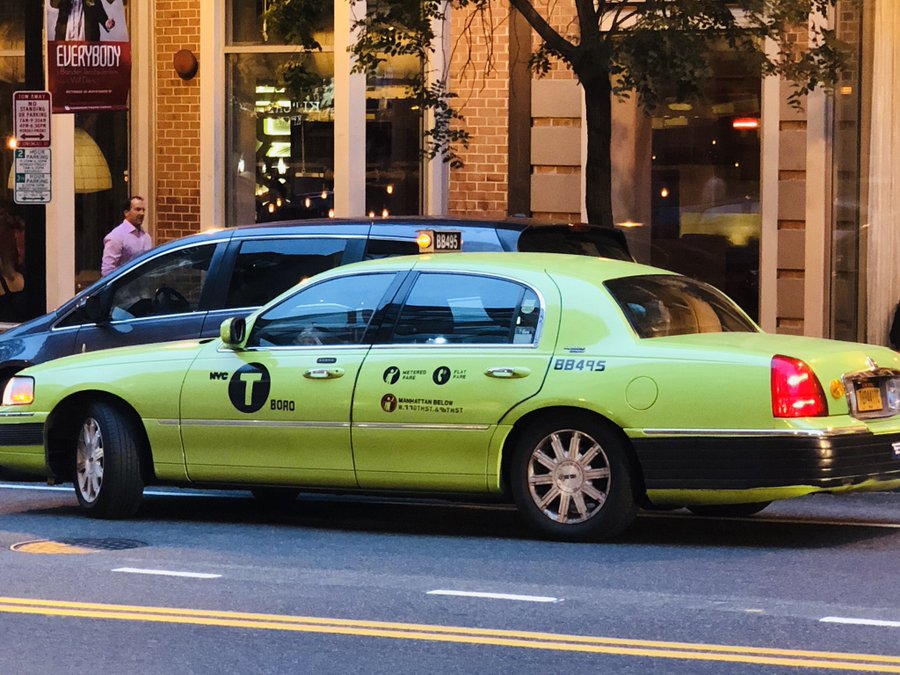 hahaha thanks to Mark for sending from Chinatown last week. 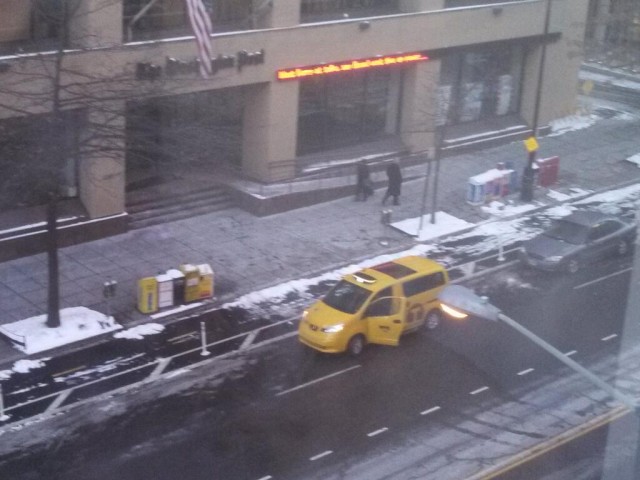 Thanks to @danvilla for tweeting us:

“New NYC Taxi outside of WaPo this afternoon. Colored the way a taxi should be.”

Must’ve been a helluva a fare! I wonder how much they tipped? 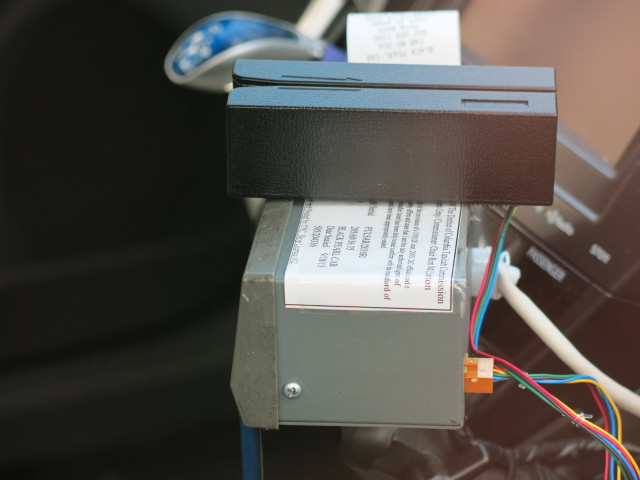 The last two times I’ve taken a cab, the driver has had a built-in system as well as a Square. In the latest one, they had one of those great NYC-style video systems in the back, and the system appeared to be working normally, but when it came time to pay, the driver pulled out his cellphone and swiped my card on Square. I asked for a receipt and he gave me one of the old-style paper slips.

I assume this is a tactic to avoid reporting fares–claiming the square income as “cash” perhaps–and I’ve heard that taxis are not permitted to use square as their credit card system. But is there any good reason for me to insist on using the built-in-system? Have other people encountered this?” 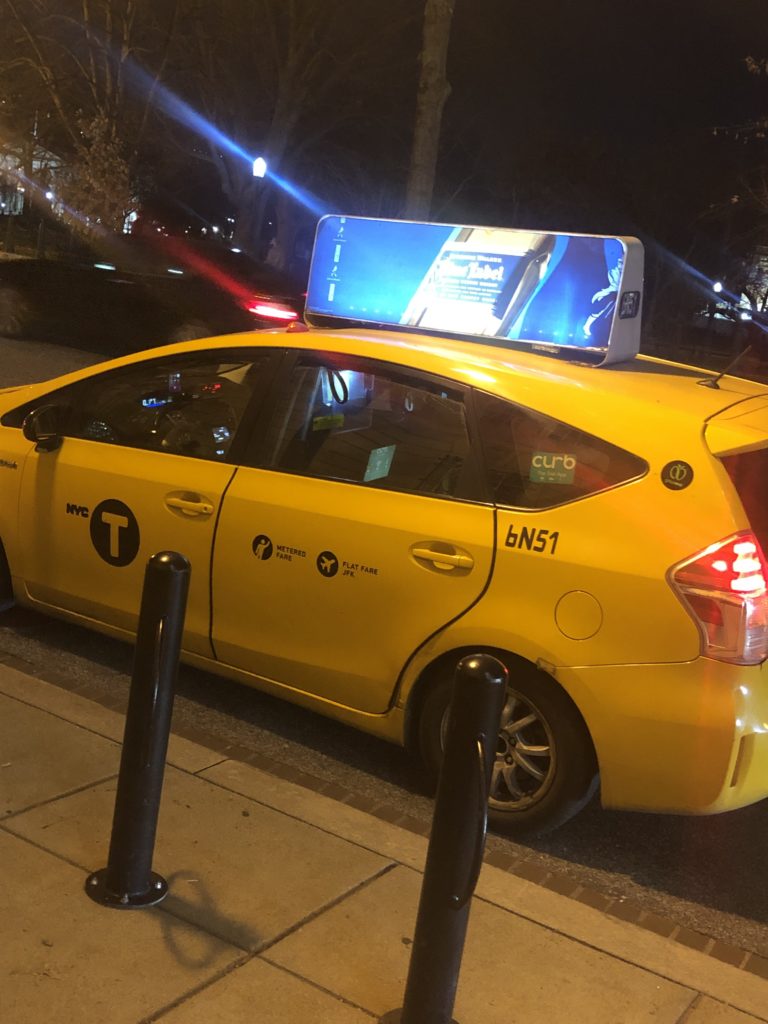 Thanks to Will for sending from H Street near the White House: “It had NY plates and everything. No clue how it ended up in DC.” 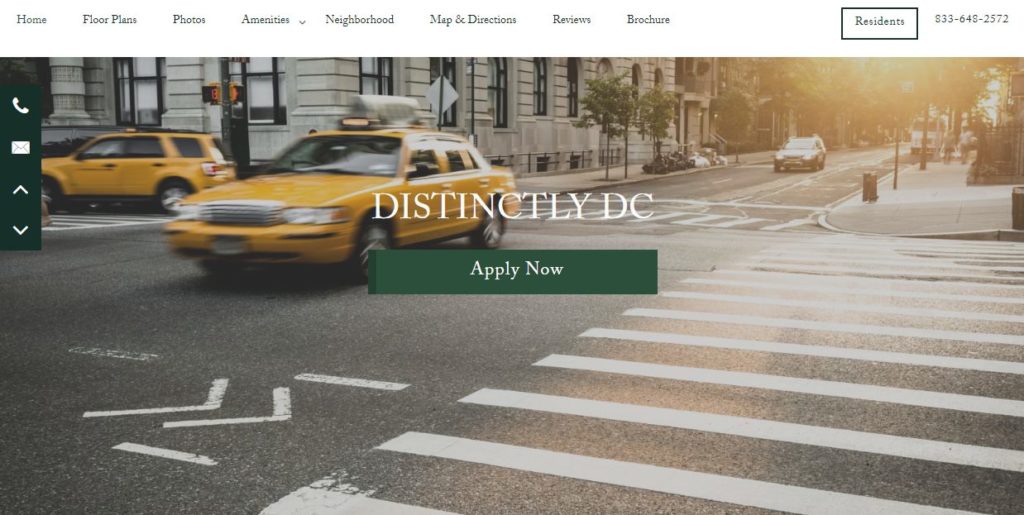 It strikes me as peculiar that this new apartment building called AdMo Heights describes itself as DISTINCTLY DC and uses a stock photo of New York City.

You can clearly see that the street signs say Central Park West and West 65th Street.” Reading the post about Red Apron butchery applying for a liquor license got me thinking about a question I wanted to pose to the community. I was in NYC this weekend and, as always, am astonished at the hordes of (seemingly) independent, unique restaurants and retailers on every block of Manhattan. It is something that we in DC don’t seem to have nearly as many of outside of small concentrated.

Now, this isn’t meant to be a DC vs. NYC debate – what we have here is completely different and I love this place and am rooting down for the long haul. Rather, I want to know from an intellectually curious perspective what the urban planning/economics/societal reason why one walkable, urban city can sustain a bagel shop and Chinese restaurant on every block but another can’t? Is it density? Lower commercial rents? Government incentives/barriers?

And then there is the followup observation I have regarding prices – I found that I could get breakfast or take a taxi in NYC for FAR less than it costs here in DC. It was amazing the price differences that I saw. So the question again is why the price disparity from what is supposed to be an equally exorbitant and expensive city to operate in? Increased competition? More customers?

If I had to venture a guess it would be a density game that we are starting to see play out in DC on strips like 14th street and H street that are going crazy. That coupled with the fact that DC’s recent development wave is happening about ten years behind NYCs. But I would love to hear more informed opinions on it.

And, really, I just want to be able to get a bagel and coffee combo delivered to my front door by a nice man on a bike like I saw happen Saturday. That would enable my weekend laziness as I settle into winter hibernation mode. My husband and I recently had a terrible experience with low-cost travel bus company Megabus, and I thought it might serve as a warning for the rest of PoPville.

In short, we were forced to travel on a malfunctioning bus in the middle of the night and then abandoned at a deserted bus terminal at 3 a.m., where there was no access to water, food, bathrooms, and any of the passengers could have been attacked or robbed. I sent the company two messages right away for a refund of the $140 we had to spend on a hotel that night and received only automated responses saying that I would receive a response within 48 hours. That time window has long passed, and I have heard nothing.

We were supposed to come back from Knoxville to DC. When we first got on the bus in Knoxville, the driver said that there was a problem with the bus and that we´d have to wait. When we finally did get on, we started out of Knoxville, and the bus stalled on the highway (middle of the night, pouring rain, semis speeding by) after only about 20 minutes of driving, and we sat in the bus on the side of the highway as the driver tried over and over to get the bus started. We started driving again, and the bus stalled again! Finally we made it to a truck stop, where we sat for 3 1/2 hours while the driver made (what turned out to be) empty promises of a mechanic coming, another bus coming, calling taxis to take us back, etc. At about 2:30am they announced that we´d be taken back to Knoxville on the same malfunctioning bus and dropped at the bus terminal. Since my husband and I were worried about stalling again on the highway and getting hit by a passing truck, we told the driver that we were going to call a taxi instead. The driver yelled at us to get off the bus in that case because he wanted to leave! So instead of getting off and being potentially stranded in the middle of nowhere in the middle of the night, we stayed on and (thankfully uneventfully) went back to Knoxville.

In our case, we do not have family or friends in the area and were completely stranded when Megabus dumped us at the closed bus terminal. I can only imagine what would have happened if we had not had the extra money to be able to pay for a hotel room that night.”

Yikes. I’ve had good and bad experiences with a few services. Once I took a boltbus a couple of summers ago all the way from DC to NYC without any air conditioning. It was pretty rough. Perhaps it’s time for a final – which is the best intercity discount bus service poll. I had a horrendous experience with Diamond Cab I wanted to share with your readers in hopes I can spare them from a similar experience. Also, I wanted to see if you and/or your readers had recommendations for reliable taxi cab companies and/or car services.

I called Diamond at 1:20am on 3/27 to schedule a pickup for 5:30am that same morning as I was catching the 6:15am Megabus to NYC. I called again at 5:00am to confirm the pickup for 5:30am and was told the cab would be there as scheduled and that they would call at 5:30 when the cab arrived. They did not call back so I called again at 5:35am only to be told that there was no cab scheduled for pickup and that they had no record of my earlier calls. I urged the dispatcher to find a way to get me a cab ASAP so I did not miss my bus or to tell me if they couldn’t so I didn’t waste any more time and could try to figure something else out. The dispatcher said he was able to find a cab and assured me it would be at my house within 10 minutes. I called back at 5:50am when the cab did not arrive in 10 minutes only to be told that they could not get in touch with the cabbie and did not know if he would show. I ultimately missed the bus as I was left with 15 minutes to drive from Petworth to H& 10th, find parking that was not metered & catch the bus.

As a result of their series of failures I had to take a later bus and forfeited the $23 nonrefundable ticket for 6:15am bus I missed. I subsequently called the Diamond Cab office several times to complain and ask that they reimburse me the $23, but they were consistently rude and refused to accept responsibility. I even spoke to someone in the office, not just the dispatchers who are usually rude and incompetent, but they too were unhelpful. Fortunately, I only lost $23 (in addition to 3hrs of my weekend) — it may have been worse if I had missed a flight.

I hope this helps someone.”

I’ve had some bad experiences trying to schedule taxi pickups as well. Can anyone recommend a reliable company for pickups? And since we’re on the subject I remember back in the day some folks (myself included) had trouble getting cabs to take us home from time to time. Do folks still face that problem today (personally I’ve had much better luck with drop offs the last couple of years)?