Thanks to Matt for the update: “Sadly it appears our beloved microscope store in Dupont is one of the retail causalities of the COVID-19 Pandemic. They’ve cleared out the window display.”

From the before times: END_OF_DOCUMENT_TOKEN_TO_BE_REPLACED 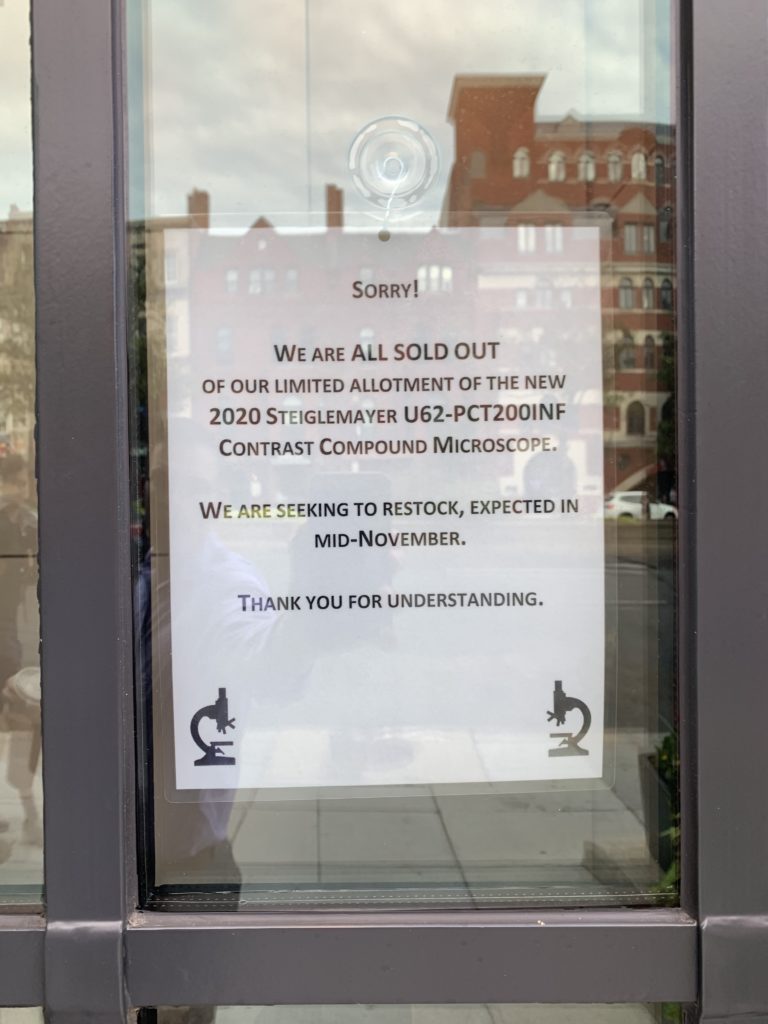 Thanks to Ken for sending: “The mysterious microscope store that is never open in Dupont has sold out!” END_OF_DOCUMENT_TOKEN_TO_BE_REPLACED 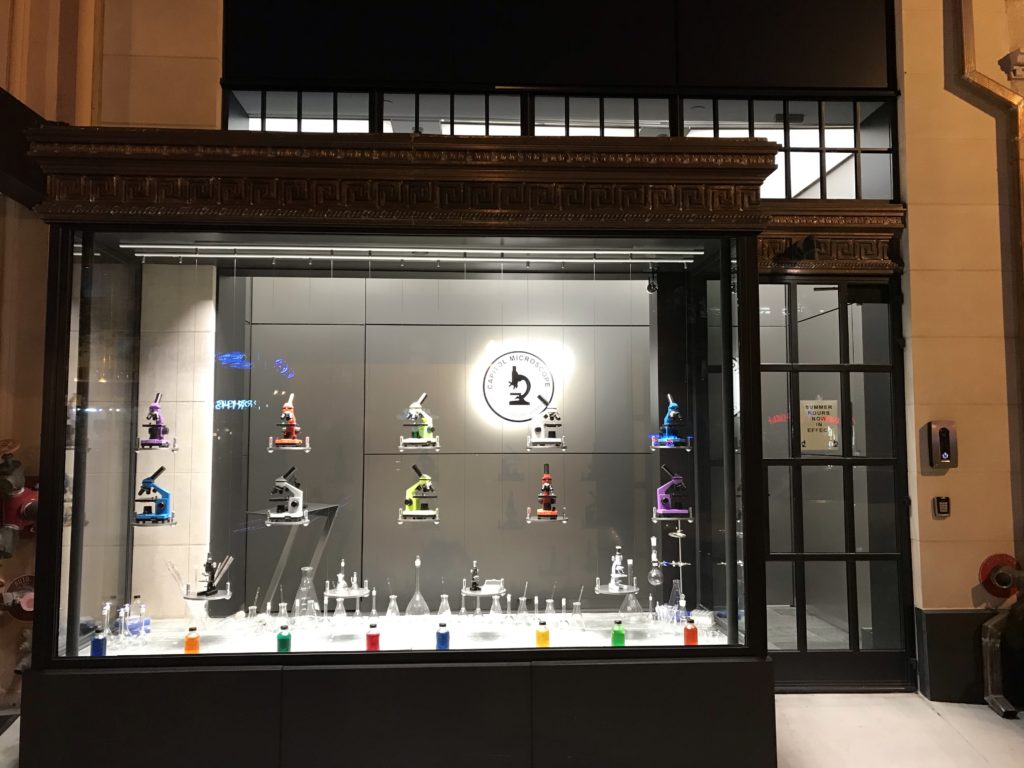 No one, and I mean NO ONE, seems to know what this shop with a great window but not much more (e.g. it’s never open) is all about. Do you? It’s on the east side of Connecticut Ave north of the circle between R and S. Any ideas?”

Aaron writes (and sends the photo above):

“There’s a new business there that is either DC’s newest and most secret speakeasy, or DC’s weirdest retail experiment. It purports to be “Capital Microscope Supply Company”, but how many microscopes do you have to sell to walk-ins to pay rent on the 1700 block of Connecticut?? Even better, they have rotating teaser signs posted on the door – this week it’s “Summer Hours now in effect”.

This has got to be some kind of bar or secret restaurant.”

Back in June we spoke about it and learned: END_OF_DOCUMENT_TOKEN_TO_BE_REPLACED 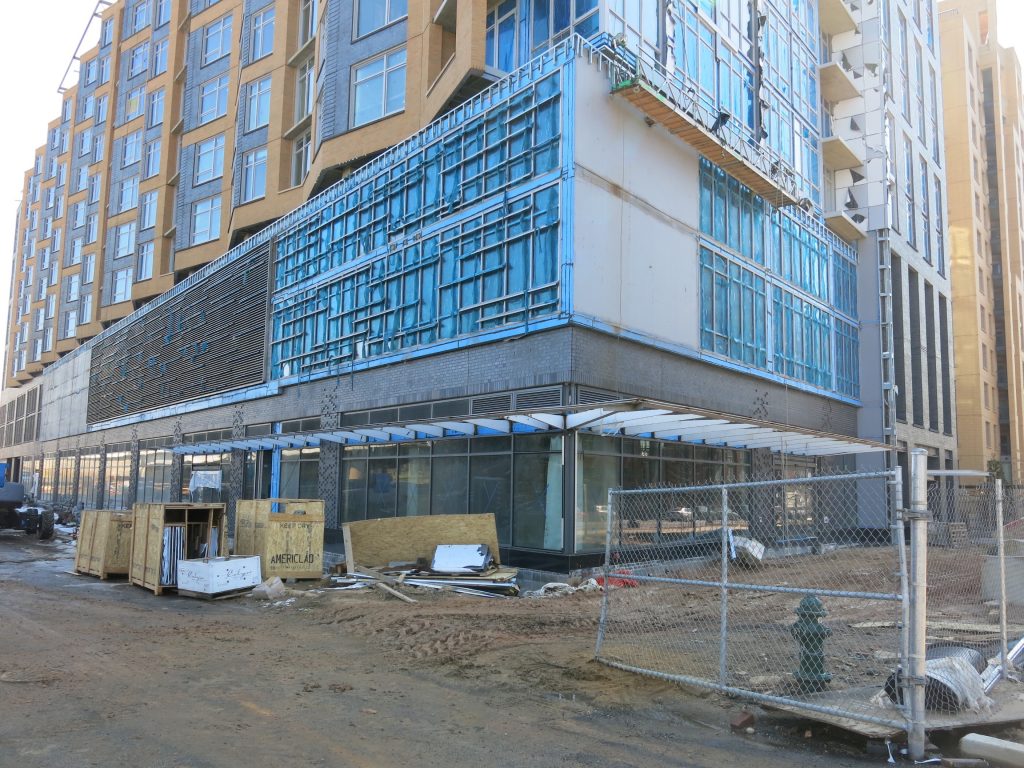 As H Street was getting closer to opening, every time I posted I’d get emails asking about Navy Yard’s status. Unfortunately PR was unable to give an opening date so I stopped by last weekend to take a peek. Still a few months to go for sure: 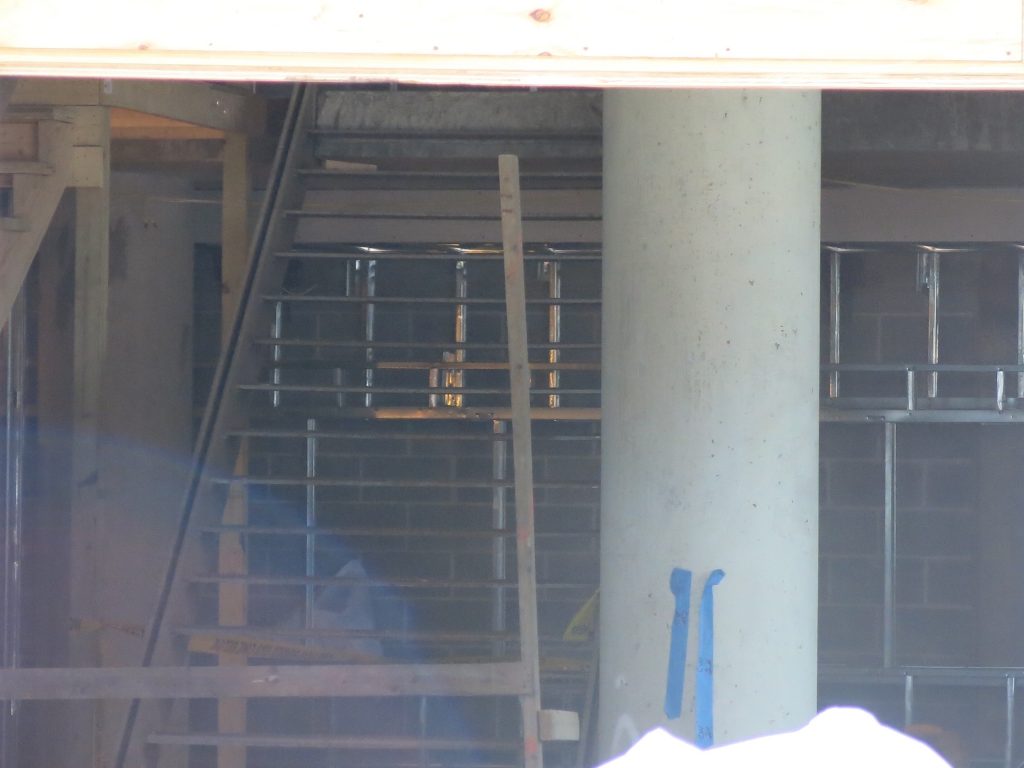 “Early 2017” may have been a bit ambitious when they announced in 2013 but a ton of progress has been made in the last year: 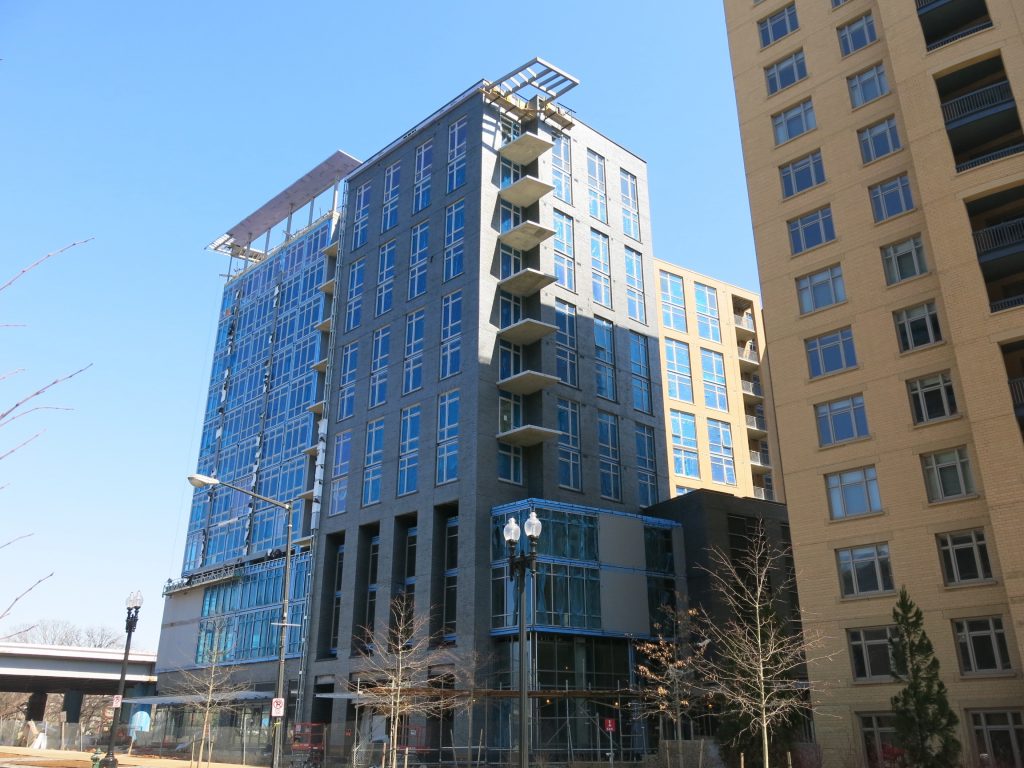 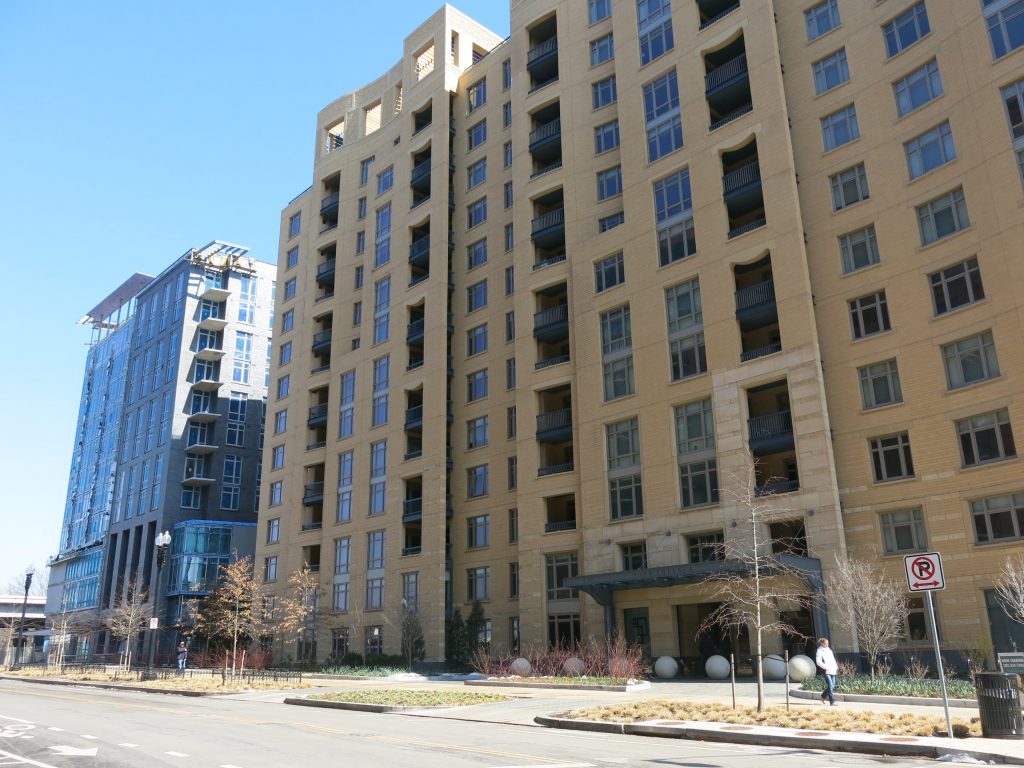 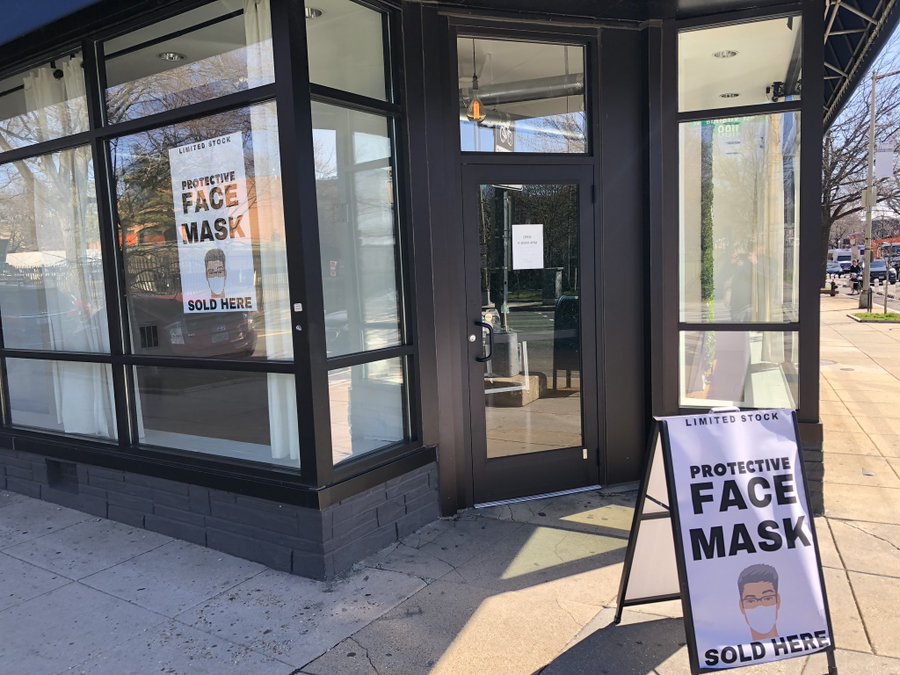 Ummm, thanks to Mathew for passing on from Sean: “Coronavirus supply store???” 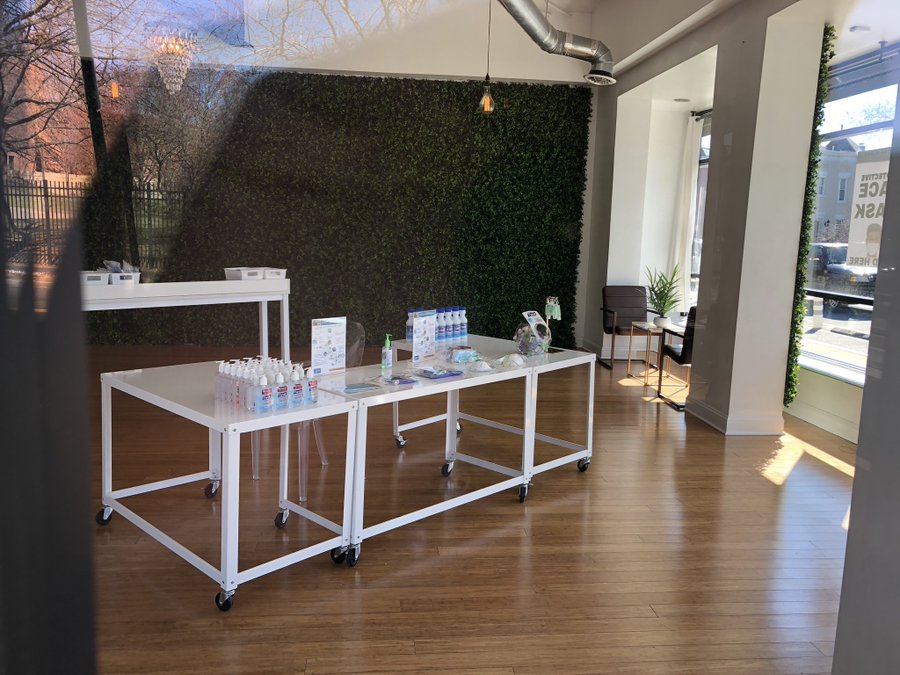 After looking inside, I can’t tell if this is like the “microscope store”, straight up art, straight up entrepreneurial (ie selling cold water on a hot day) or straight up bat shit crazy. I guess we gotta find out the prices… 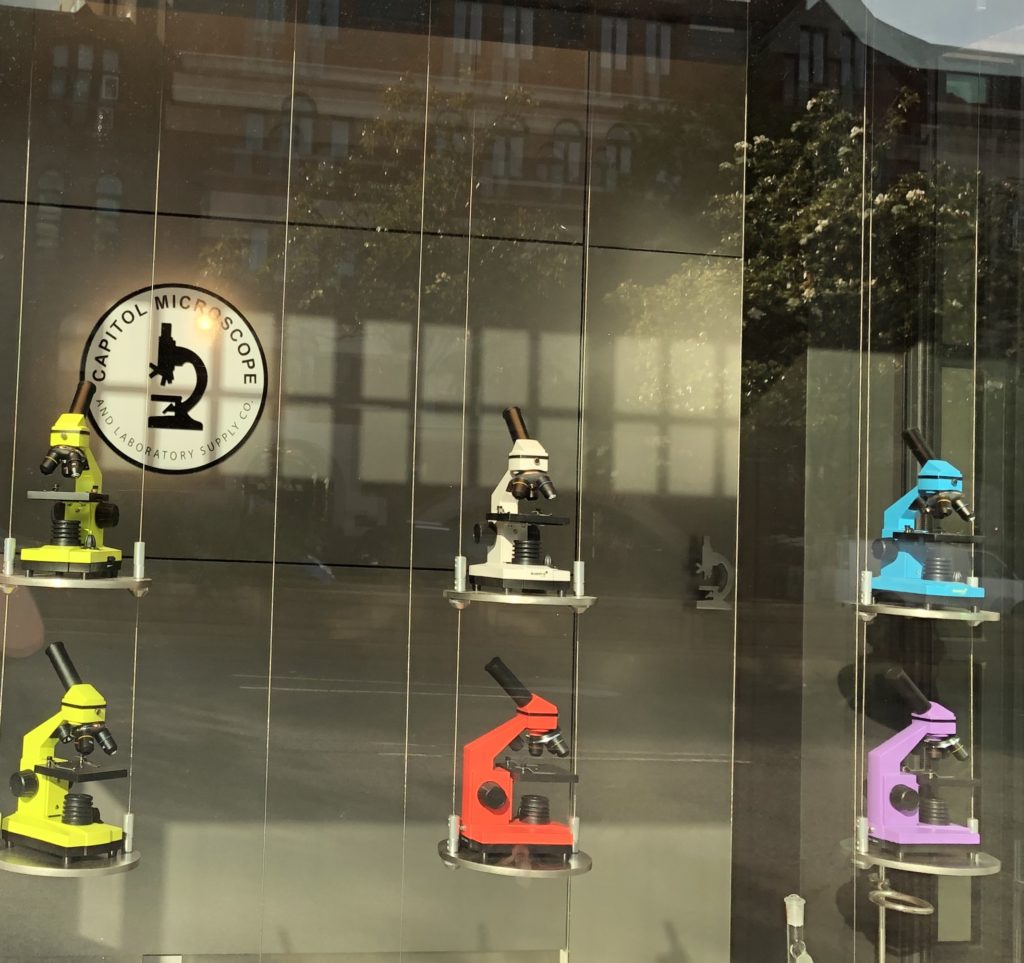 There’s a new “business” at 1735 Connecticut Ave NW that seems like an obvious front. My first thought was the latest Dave Eggers reading room, but apparently not. The Googles connect this address to a very odd website (unither.com). My best guess is some sort of “escape the room”, or a new speakeasy. Any insights?” END_OF_DOCUMENT_TOKEN_TO_BE_REPLACED

This column is written and sponsored by D.C. real estate agent and Edgewood resident Jessica Evans. Email her questions at  [email protected].

We’re flying through the steps of the home-buying process with just a few more to go. If you have missed any or want to start at the beginning, you can do that here.

Now that you’ve made it through the home inspection, and have a ratified contract on a home, we’re on to part 2 of the financing process. Financing part 1 was choosing a lender and pre-approval. Now that you have a home lined up to purchase, it’s time for part 2, the loan application and other steps needed to receive your financing on the settlement day.

Expect your entire financial (and tax) situation to be examined under a microscope with numerous requests for documentation. During this time it is important that there are no substantial changes to your financial situation, in particular:

While the the information that you provide your lender will confirm that you qualify for your loan, the other part of the equation is making sure that the property that you are purchasing qualifies.

Since the property you are purchasing will be collateral for your loan, the bank wants to make sure that your loan is based on the market value and that there are no conditions that would have a substantial impact on their ability to sell the property in the event of foreclosure.

How does a bank know what the home your buying is worth? This is where the appraisal comes in. Your lender will order your appraisal, and it will be conducted by a third party service provider. The appraiser will have a copy of the sale contract. They will visit the home to take measurements, document the size and condition, and note any adverse conditions. END_OF_DOCUMENT_TOKEN_TO_BE_REPLACED Bedbugs had attacked my apartment. Bedbugs–pests, scourges of Brooklyn, instant transformers of dwellings from Good Deal to Not, had been reported here for months, but in a fit of narcissistic pique I had always assumed I’d be spared. I crafted a series of creaky rationalizations to myself to justify my belief that they would never come my way. “I’m not home often enough to get bedbugs.” “I don’t have much furniture.” “Bedbugs can’t reach the 10th floor.” When I went to bed one night and awoke the next morning with an archipelago of red welts on my chest, I knew I had a problem. Since then, my apartment has been doused with pesticides twice and counting. I have wrapped my possessions in plastic and garbage bags. I know what it is like to bathe in Diatomaceous Earth.

I contacted residential services after I’d been bitten. A building employee stopped by my place, took apart my bed, and found one coffee-ground sized bedbug skulking around in my box spring. He scheduled me for what he blandly called a “treatment.”

Days turned to weeks. Finally, a packet of stapled papers at my door informed me that my apartment was to be sprayed for bedbugs in two days and contained instructions for preparing my apartment, which consisted of disassembling my bed, placing all of my bedding and clothes into plastic bags and removing them from the apartment, and, finally, moving all of my furniture to the middle of the apartment.

I came home to find my entire room had been tossed—ransacked, even. The exterminators had flung the mattress across the room and completely eviscerated my box spring. My desk was turned on its side, its drawers removed and laid on the floor next to it. My bookshelf had been taken apart. I made my bed, wheezing and sneezing and red-faced from the aerosolized poison floating about in my apartment, and laid down on it that night only to awake to fresh bites and a bedbug crawling on my wall that left a massive pocket of blood behind when I smacked it with a shoe. I was going to have to step up my game.

That night, I scored some Diatomaceous Earth at a hardware store. Diatomaceous Earth is an off-white sedimentary rock made of algae that, when viewed under a microscope, looks like the contents of someone’s junk drawer. When pulverized, it makes a powerful insecticide that works by extracting fat from a bug’s exoskeleton, dehydrating it. That sounded like a perfectly torturous death for these vermin. I laid down a small mountain of DE on the legs of my bed frame, sprinkled a thick layer on top of my box spring and drizzled some on top of my mattress cover. Again, I woke up with bites.

Continues after the jump. END_OF_DOCUMENT_TOKEN_TO_BE_REPLACED 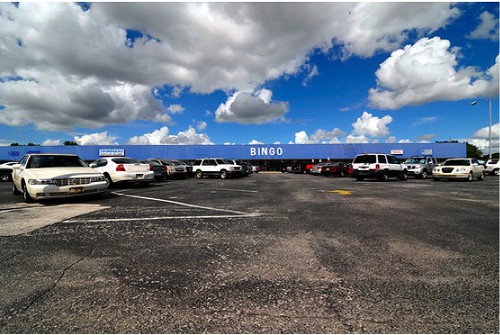 Join Ten Miles Square and the work of Pat Padua and Jennifer Wade in Microscopy at Hounshell (1506 14th Street NW) this Saturday from 6 to 8 p.m.  Continues after the jump. END_OF_DOCUMENT_TOKEN_TO_BE_REPLACED

A couple of weeks ago, PoP asked some of us contributors if one of us could hit up the National Museum of Health and Medicine on the Walter Reed Campus. Even though this is very much west of North Cap, I jumped at the opportunity – not just because I’ve got my days free, but also because I love creepy stuff in jars of formaldehyde. I’ll warn you now: some of the pictures are probably not for the faint of heart. Also, flash photography was prohibited, so the quality of the photos isn’t great.

First things first: Holy crap did I get lost on the campus. I drove in and showed ID and registered and told the guards I was going to the museum and even asked them how to get there (after I’d studied the map online). It took me 15-20 minutes (and asking directions twice more) to finally find it. Parking was convenient, but if you’re nearby, I’m guessing it’s much easier to get to on foot.

Once inside, I knew my feeling had been correct. There were all kinds of things in jars and Civil War era surgical kits, and skulls and femurs (some damaged by cannonball fire) and I realized that there would be no way to subdue my giddiness.

I decided to hit what I figured were going to be the more boring parts first: namely, the exhibit chronicling the history of the microscope. I have no pictures of this b/c the ones I took of Hooke’s microscope ended up really blurry, and frankly I was in a hurry to get to the good stuff.

Then I checked out the temporary exhibit on forensics, which was better namely because of the skulls. I definitely do not want to go head to head (so to speak) with a ball peen hammer anytime soon. 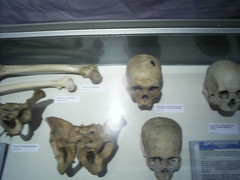 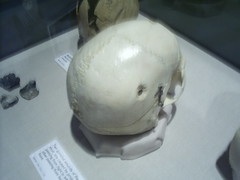 Story and lots more photos continues after the jump. Warning not for the feint of heart! END_OF_DOCUMENT_TOKEN_TO_BE_REPLACED