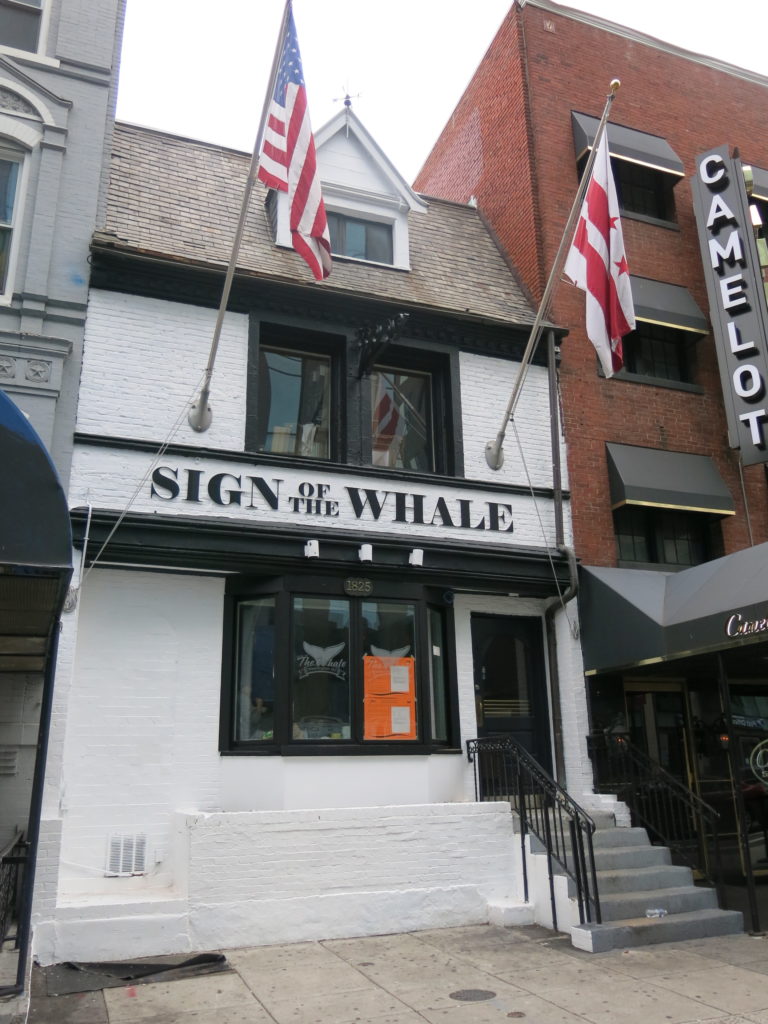 “Sign of the Whale, the DC institution known for decades as the ultimate intern hang out has closed and re-opened its doors more than a couple of times. Now under new ownership, what was once an overcrowded divey intern bar is maturing into a gathering space where those same interns, now grown professionals, and new DC residents alike can get a touch of nostalgia, grab a quality cocktail and bites and be proud to frequent.. Keeping its namesake, the new Sign of the Whale will be unveiled to the public mid-February. Owners of Nero, who have taken over Sign of the Whale, have pegged Chef Andre Holden to create a unique fusion dining experience for the concept.

Beyond the new sleek, white facade of the century-old building at 1825 M street NW will lie a chic, fully renovated cocktail lounge. The once sticky marble-top bars will now boast sophisticated copper counter tops flanked by expanded fireplaces and bistro-style seating. Upstairs, a smaller bar and cozy, lounge seating await with exclusive cocktails awaits. Beyond the freshly exposed brick where sports flags once hung, an intimate dining area with banquets and booths for more private dining will be available. In 2012, Complex Magazine named Sign of the Whale as “one of DC’s douchiest bars,” writing, “At some point you age out of guzzling liquor from a tiny plastic cup.” Owner Vik Bhalla understands just that and is ready with a craft cocktail menu that will accompany a curated wine menu. However, at Sign of the Whale, a selection of Sake will take the lead, accompanying chef Andrew’s sushi and southern comfort-fused menu. END_OF_DOCUMENT_TOKEN_TO_BE_REPLACED 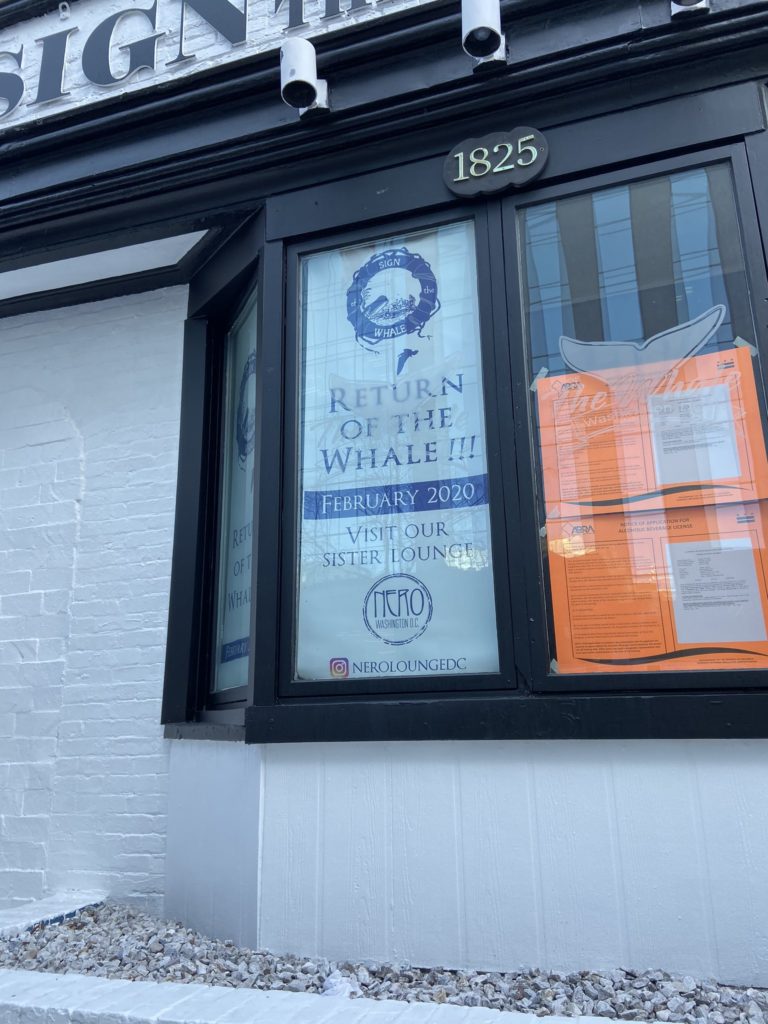 Thanks to Harrison for sending: “Sign of the Whale is returning yet again!!” 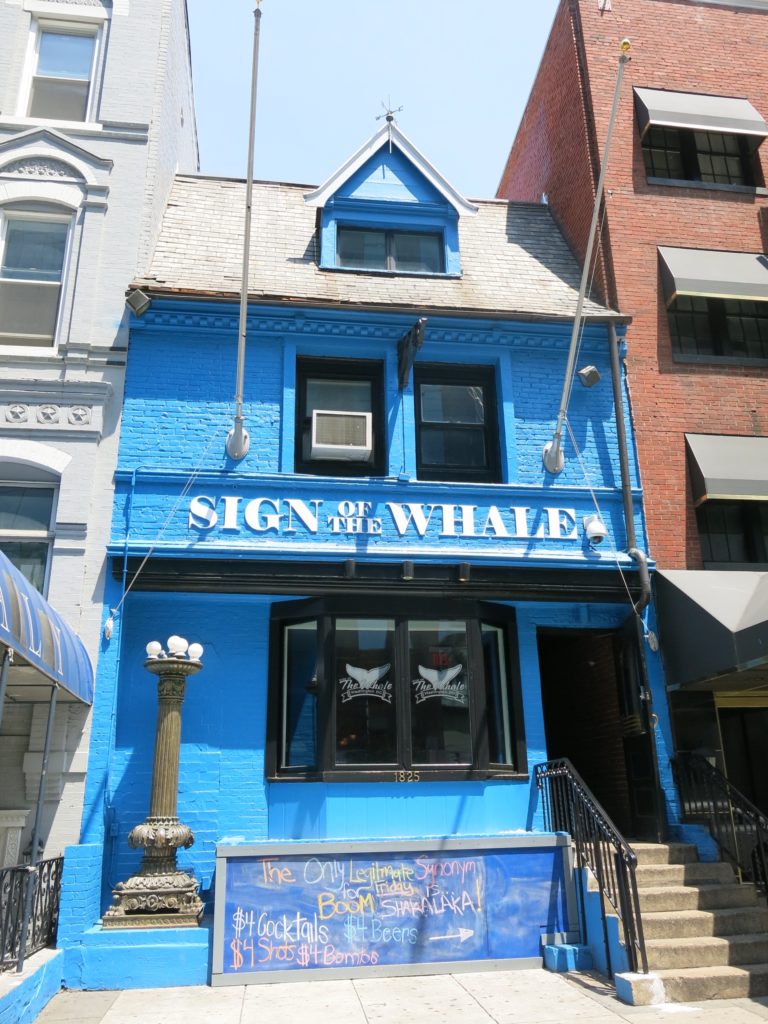 They got a paint job too. They were briefly replaced by DC Tap House but all is right in the world again. Check out their new menu here. 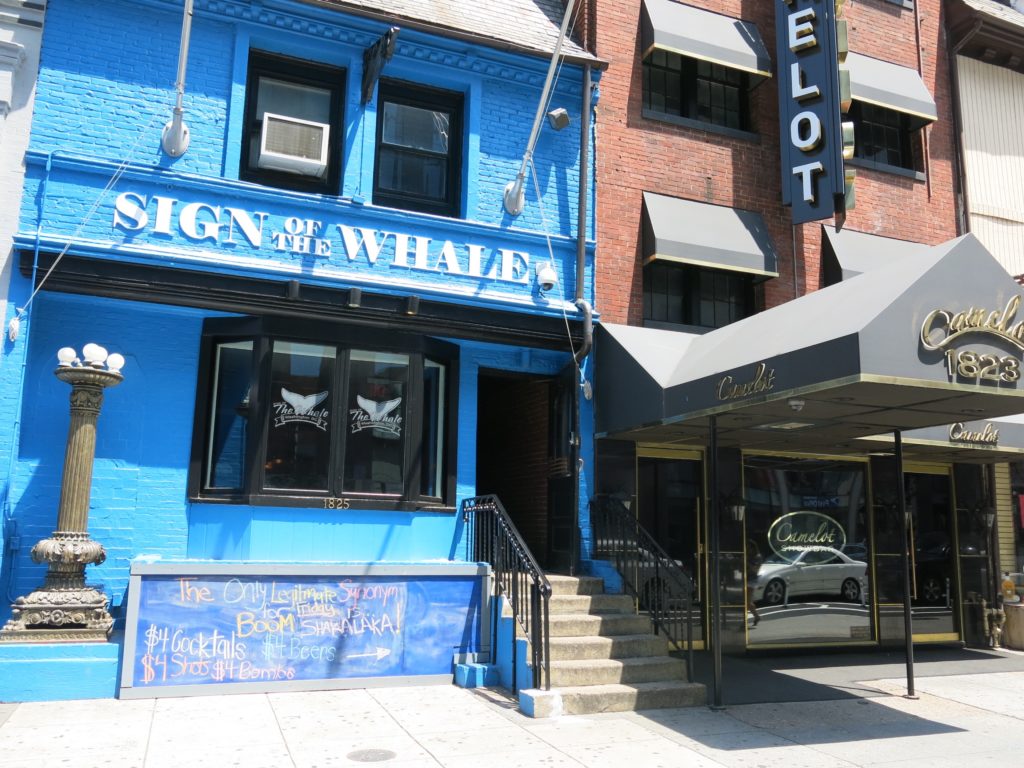 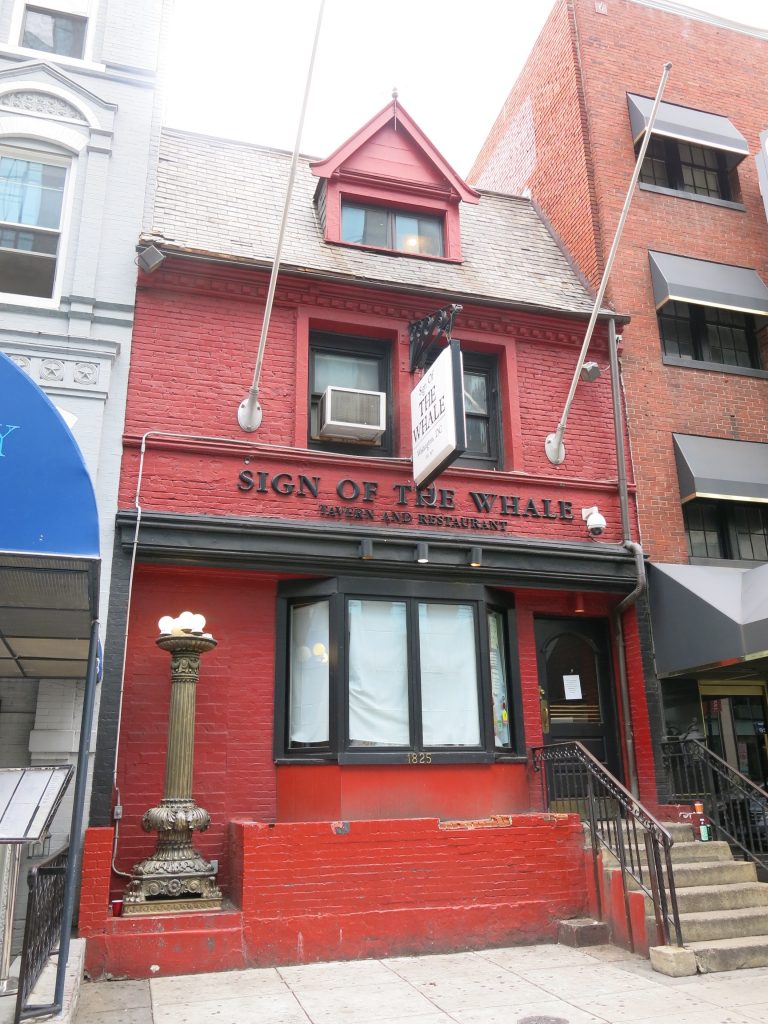 Thanks to Jason Shevrin for the bombshell news. And may God have mercy on our souls: 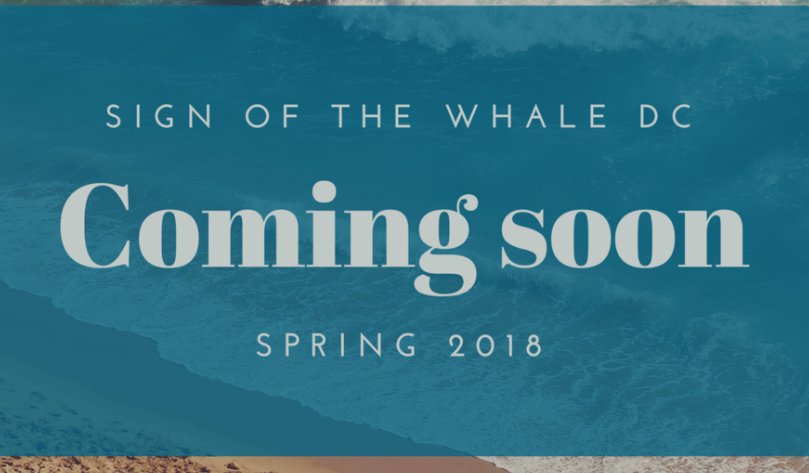 “Bringing back a DC classic 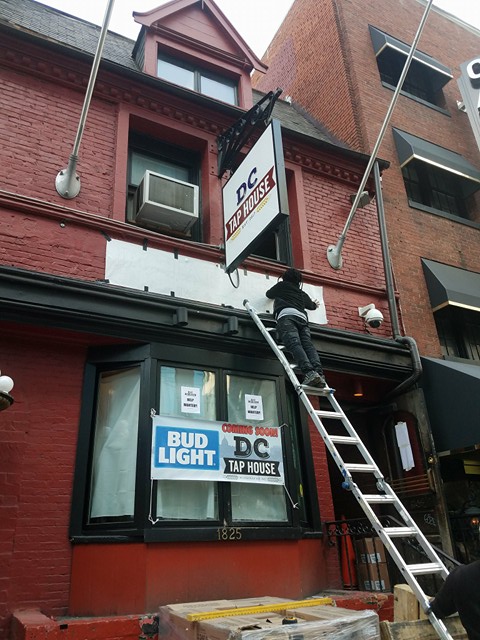 Thanks to Grant for sending the confirmation. A mere 10 days ago we learned that Sign of the Whale had shuttered. 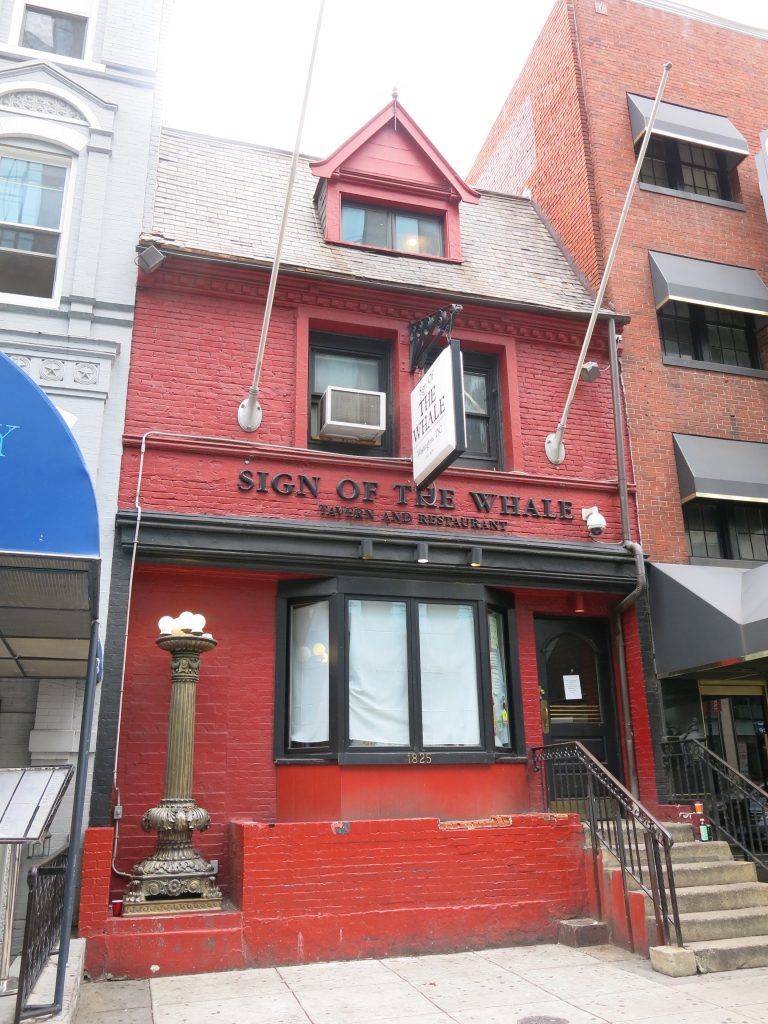 There was a time… Thanks to Brian for the heads up:

“curtains drawn/windows papered over, and a sign on the door that said “We are closed until further notice.” 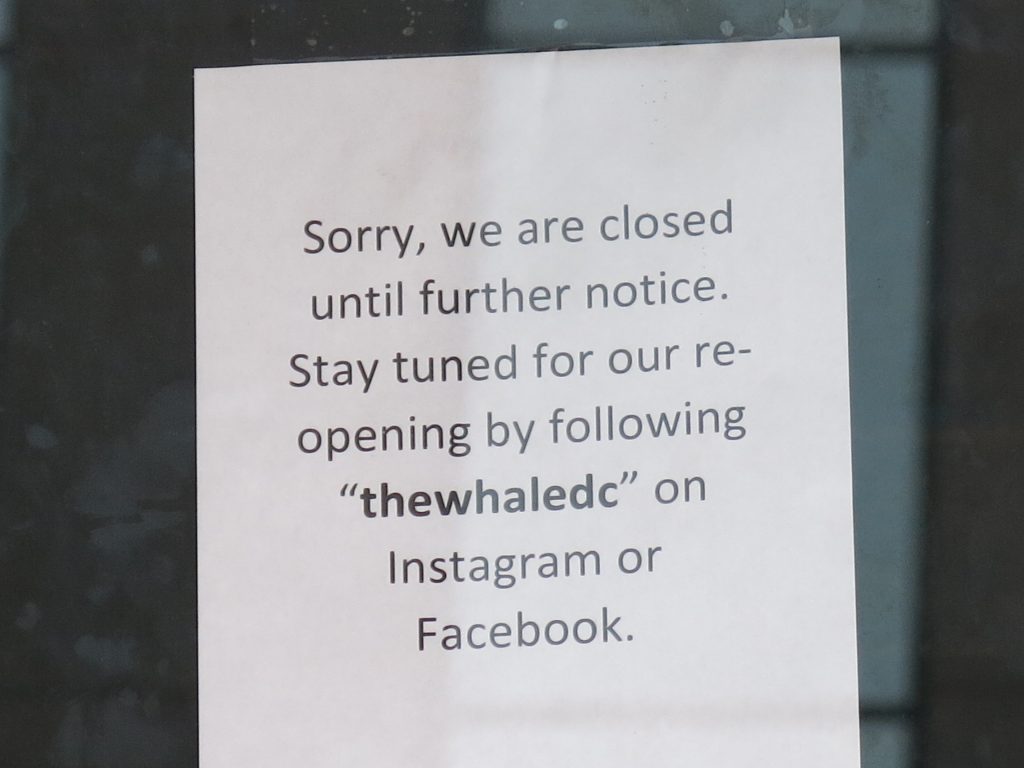 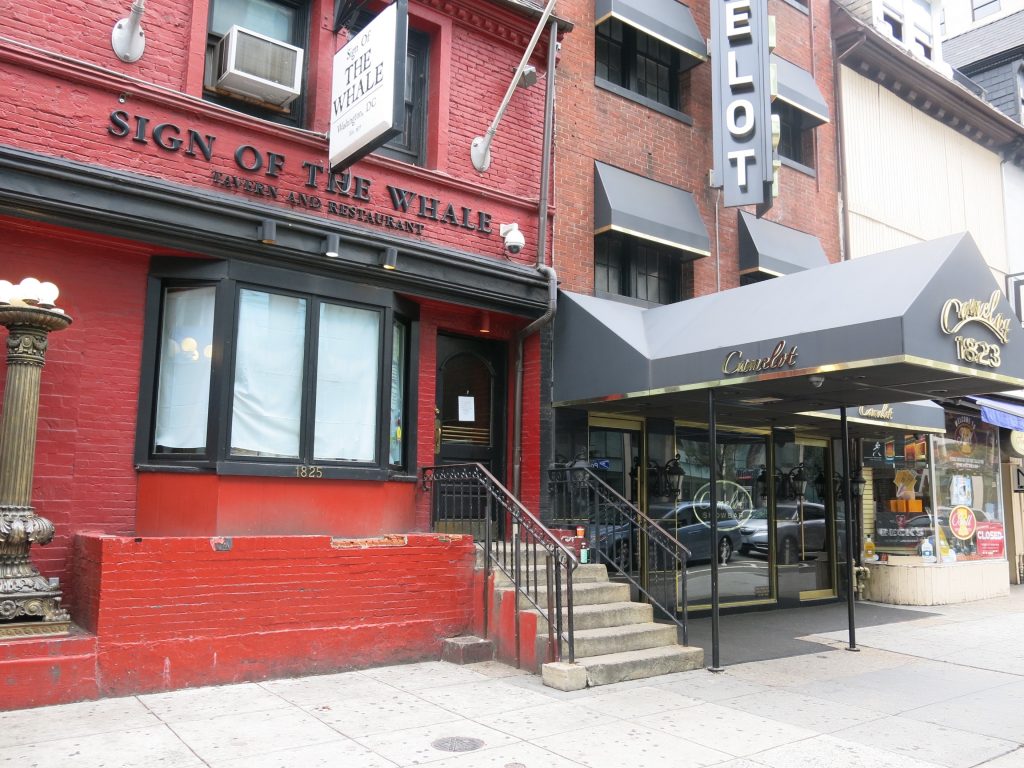 UPDATE: Thanks to Grant for finding – perhaps not 3.0 after all. From DC Tap House: 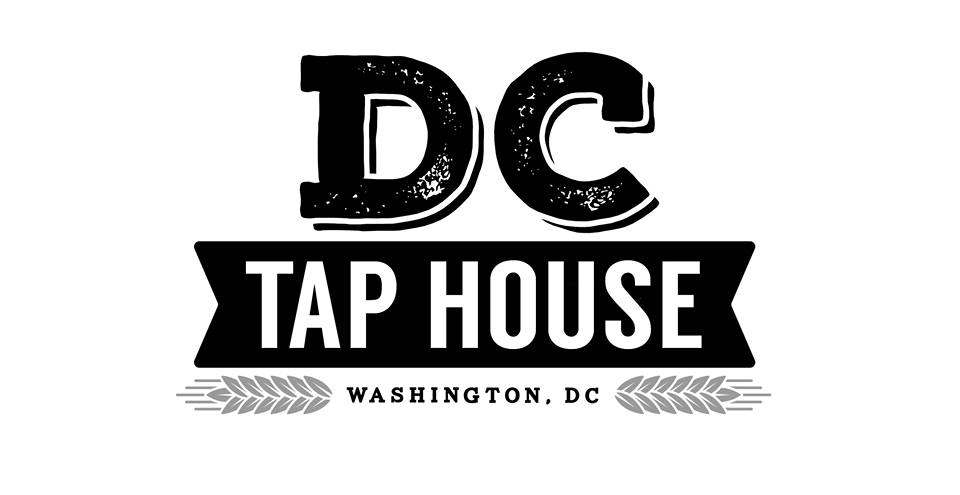 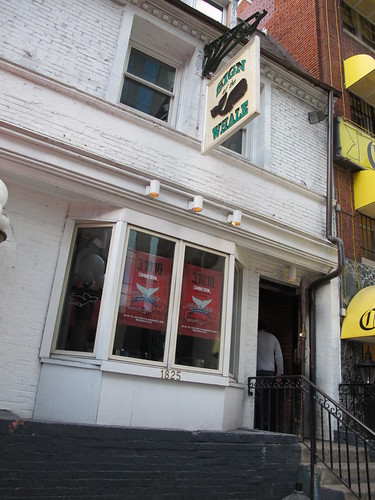 I’m only calling this scuttlebutt because I haven’t been able to officially confirm but I believe this has a high likelihood of being true. Here’s an email apparently from an employee that a reader forwarded to me:

“Due to the Whale’s location to Camelot, they have decided to start a new thing on Thursday’s. It’s called Topless Thursday’s. Don’t worry, that doesn’t mean you have to come to The Whale topless. However, the bar staff will be. All of the female bartenders were told to wear “skimpy” bras, and for those of you who have been before we have some HOT female bartenders. Secondly, all of the male bartenders will be shirtless with a bow tie. Yes, that includes yours truly. So come to see the hot ladies and laugh at me. It’s gonna be the wildest thing in DC.”

A few weeks ago I wondered what changes were coming to The Whale (formerly Sign of the Whale located 1825 M Street, NW) but I never would have guessed this…

Has anyone else heard about this? This could be a hoax but if true do you think this a smart promotion?

Sign of the Whale is located at 1825 M Street, NW. I’m not sure if they’re trying to keep up with the recent upgrade of former neighbor the Madhatter but I couldn’t really tell what was different. Perhaps just the logo is changing? When I peeked inside on Sunday the place was too crowded to bother a bartender. I guess they still have 10 days to make some changes… Anyone know the scoop here? 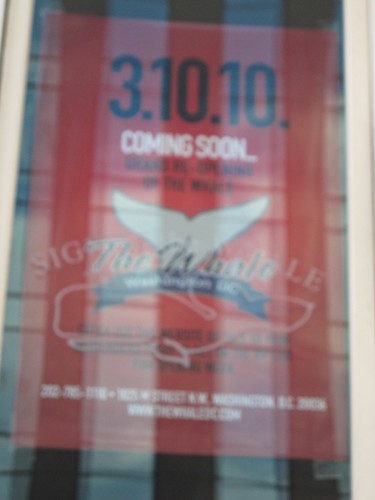 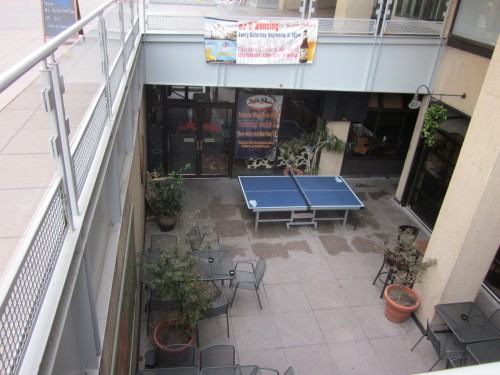 Down go two more legends (in August anyway.) Like Millie & Al’s et al, for me, they’ll be missed for the memories. Thanks to all who passed on the big news from Washingtonian:

“Buffalo Billiards will shutter after 25 years, while the Front Page will say goodbye after 32 years. END_OF_DOCUMENT_TOKEN_TO_BE_REPLACED 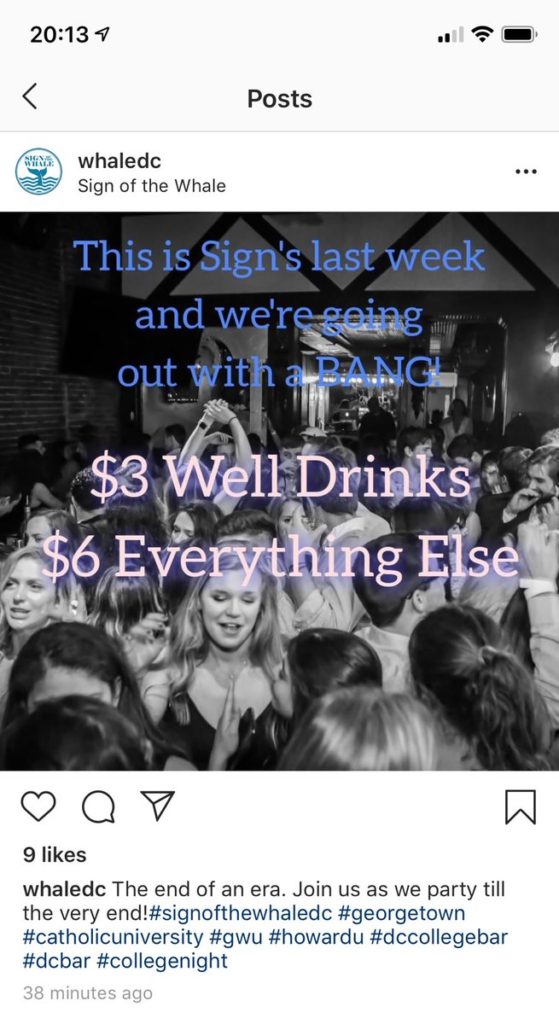 Thanks to Harrison O’Neill for sending:

“Just saw this on IG. Sign of the Whale closing… again?” END_OF_DOCUMENT_TOKEN_TO_BE_REPLACED