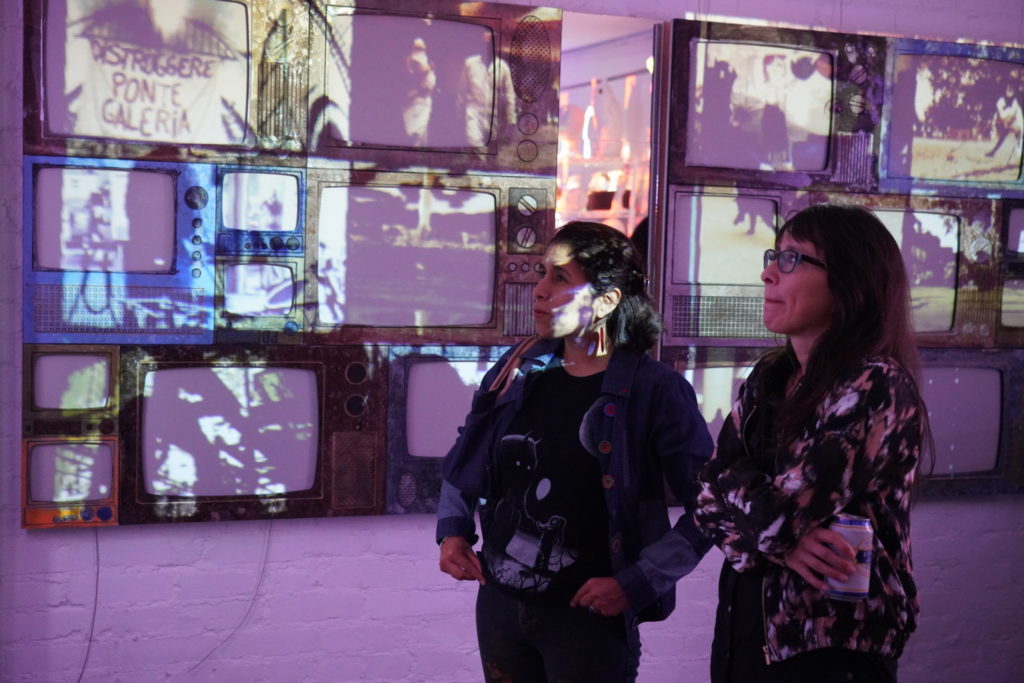 “In REFRACTIONS Robin looks back at the 20 years of his history of documenting the world as a filmmaker and taking actions as a social activist. Collaged images and videos of both the archival and newly produced for the show are displayed on televisions and projected on sculptures throughout the space. With mirrors, cameras and other technologies seamlessly weaved into the art pieces, Robin allows the audience to see themselves in the installations and invites them to reflect on their own space in society at an intimate environment of the Lost Origins Gallery.  END_OF_DOCUMENT_TOKEN_TO_BE_REPLACED 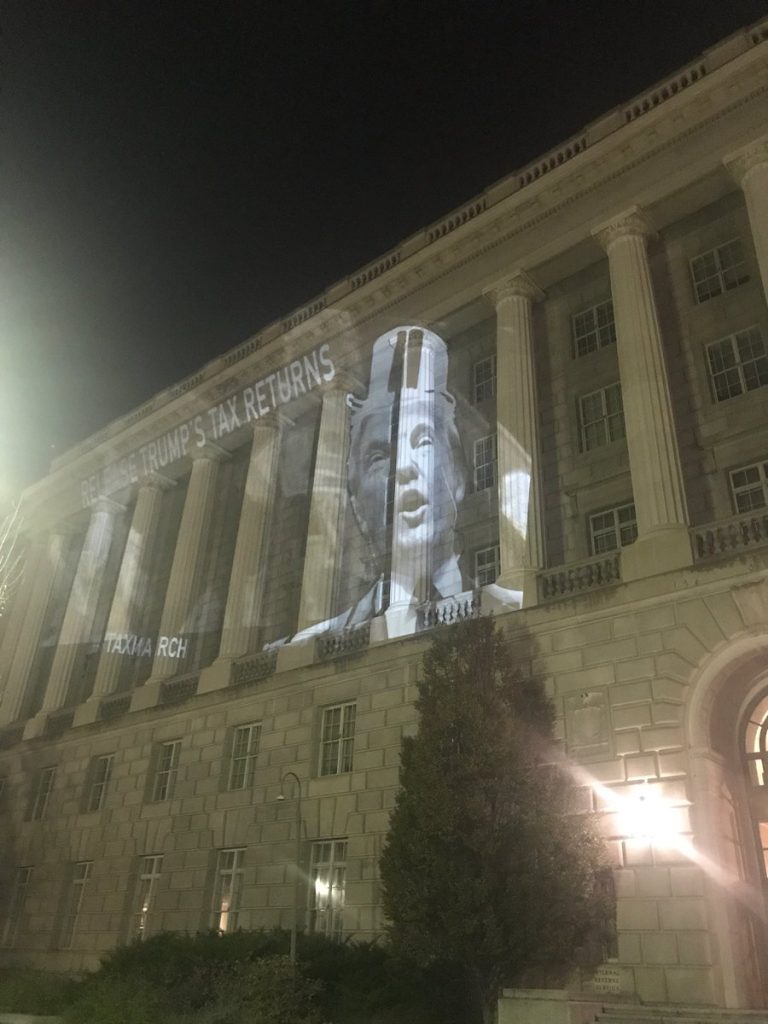 Thanks to Nick for sending last night:

“Wow, being projected onto the IRS building tonight.”

You can see some of Robin Bell’s previous projections here. 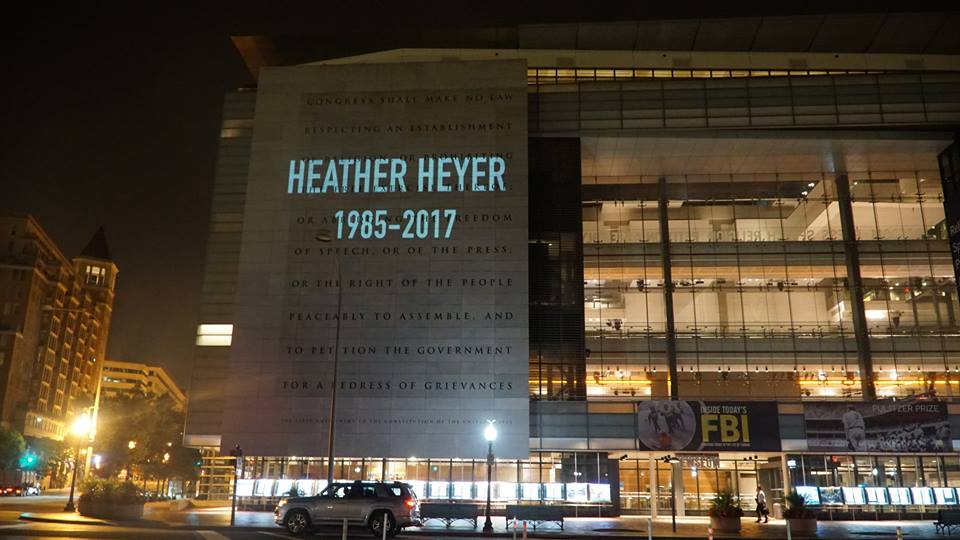 Robin Bell of Bell Visuals strikes again. Ed. Note: Somebody please give this man a grant!! 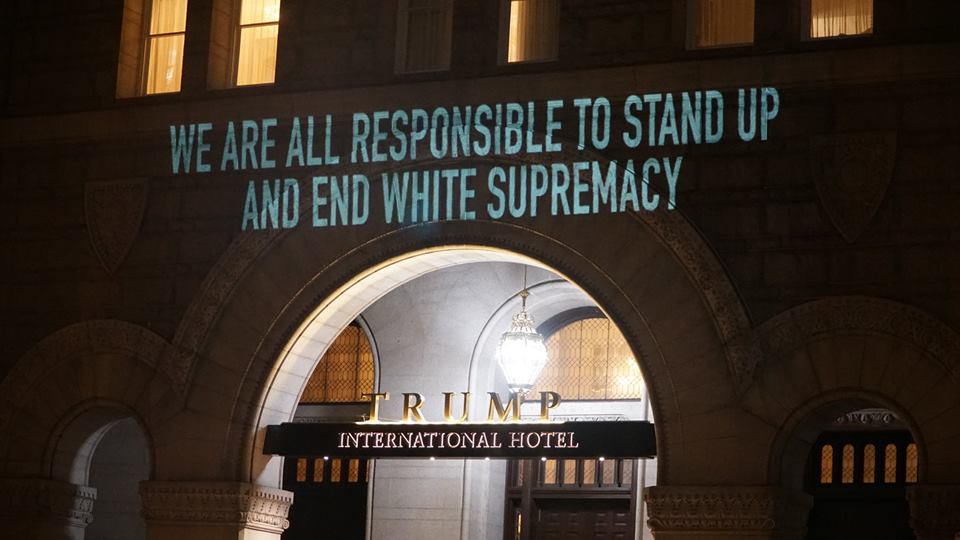 Check out all the projections from last night: END_OF_DOCUMENT_TOKEN_TO_BE_REPLACED 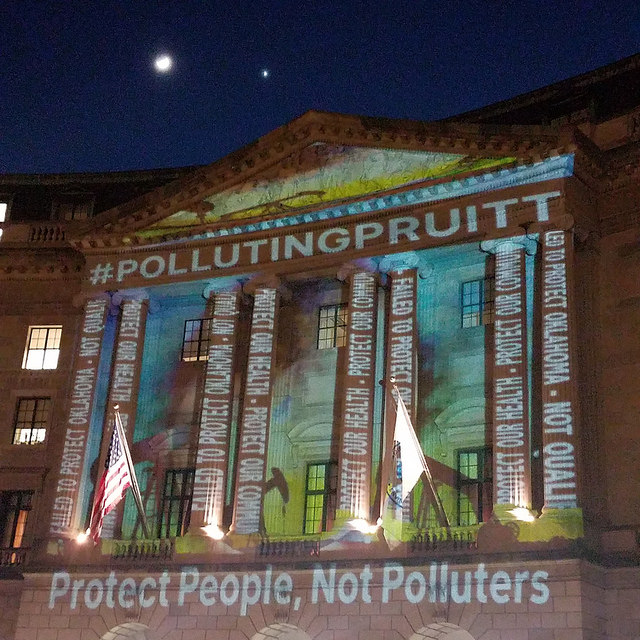 “Just saw that this local artist — Robin Bell — is behind a lot of the visual displays featured on PoPville.”

“Robin Bell, founder of Bell Visuals, is an award-winning editor, video journalist, and multimedia artist based in Washington DC. Robin works on a range of political and public interest projects. END_OF_DOCUMENT_TOKEN_TO_BE_REPLACED

UPDATE: This is a Jenny Holzer project.

Ami reports: “No logo, no party or sponsor affiliation. Circled empty Dupont Circle for a while, with a professional photographer in the circle taking photos of them. One other slogan I did not photograph was “covid presidency”. Anyone have any idea who they are?” END_OF_DOCUMENT_TOKEN_TO_BE_REPLACED 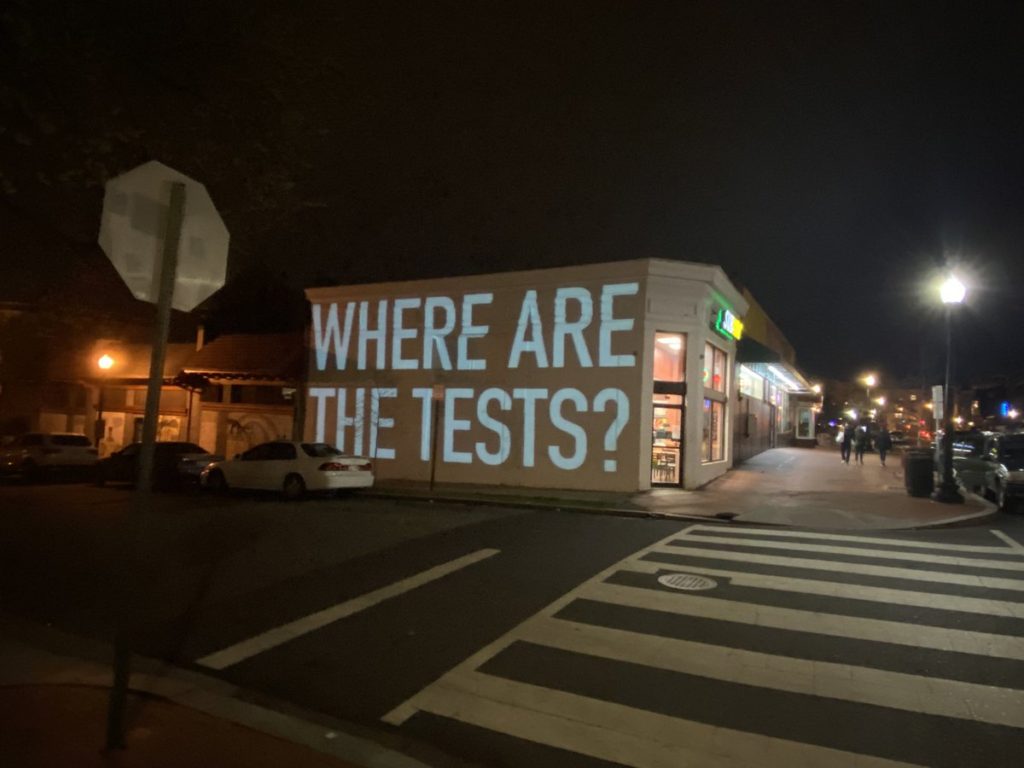 Thanks to Andrew for sending Saturday night: “Seriously.” 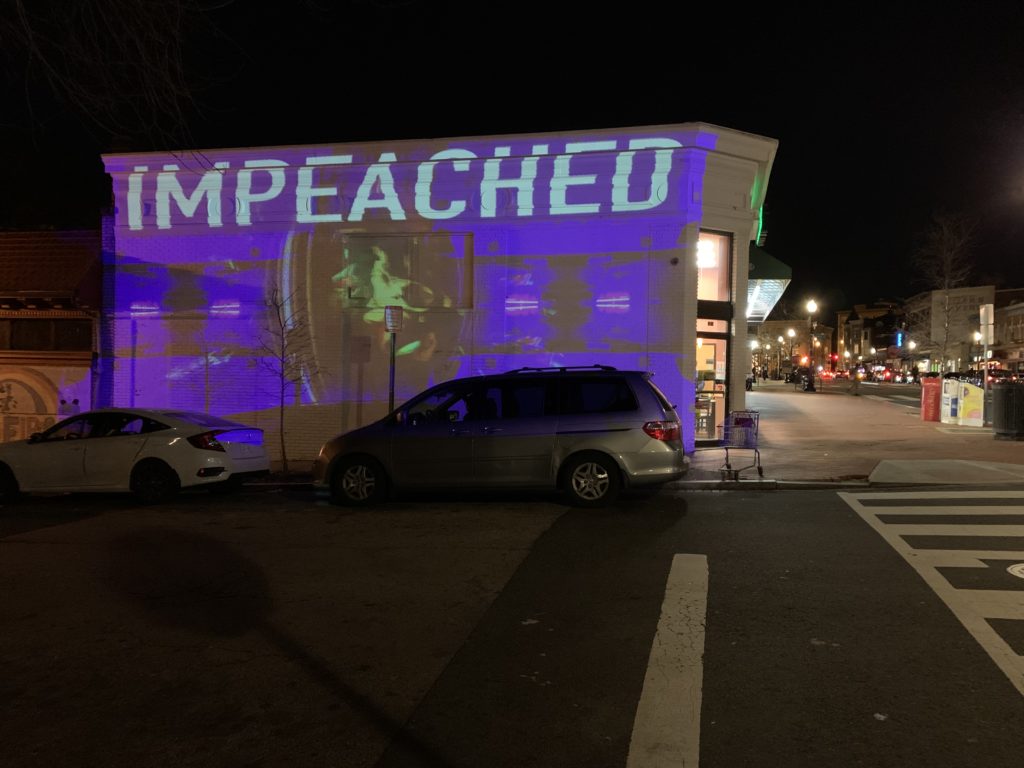 Thanks to Daniel (and MD) for sending from the side of the Subway in Mount Pleasant last night. 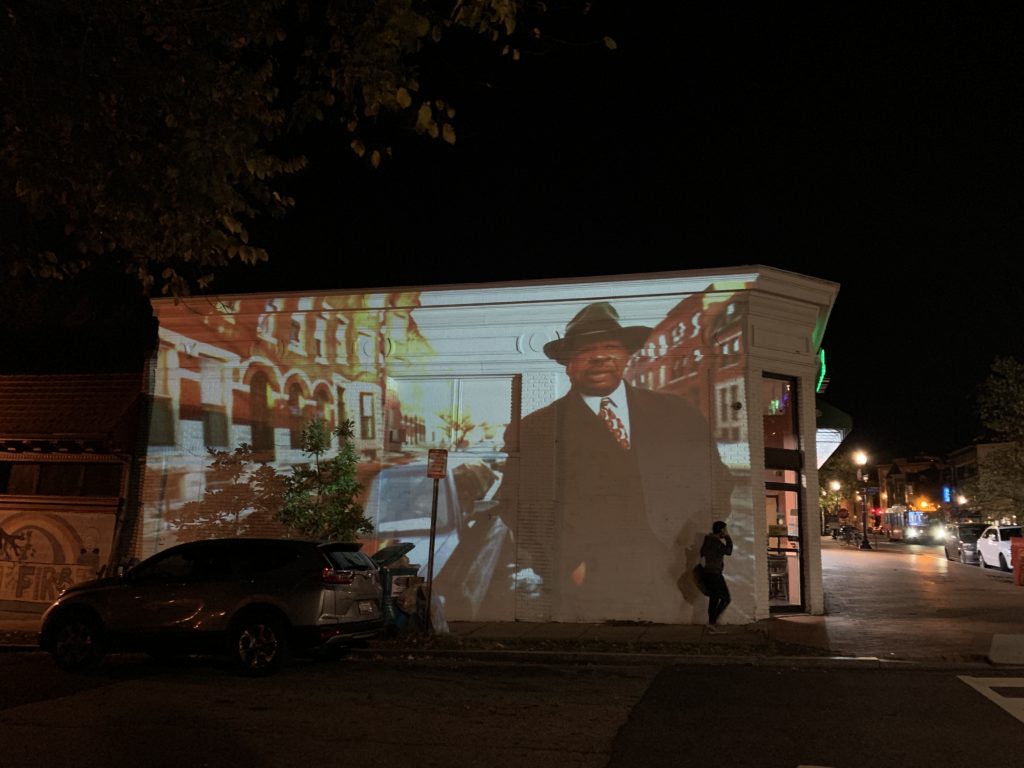 Thanks to Igor for sending. Rest in Peace Elijah Cummings. 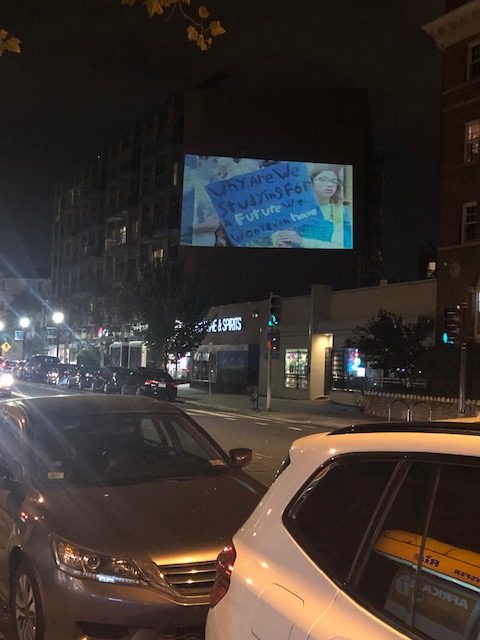 Thanks to Jesse for sending around 11pm Saturday night:

“Someone is projecting photos from Friday’s Climate Strike on the side of this building on Columbia Rd in Adams Morgan. I can’t tell if it’s coming from the building next door or the roof of the Metro Wine & Spirits, but it’s showing photos from the demonstrations in DC and NY.” END_OF_DOCUMENT_TOKEN_TO_BE_REPLACED 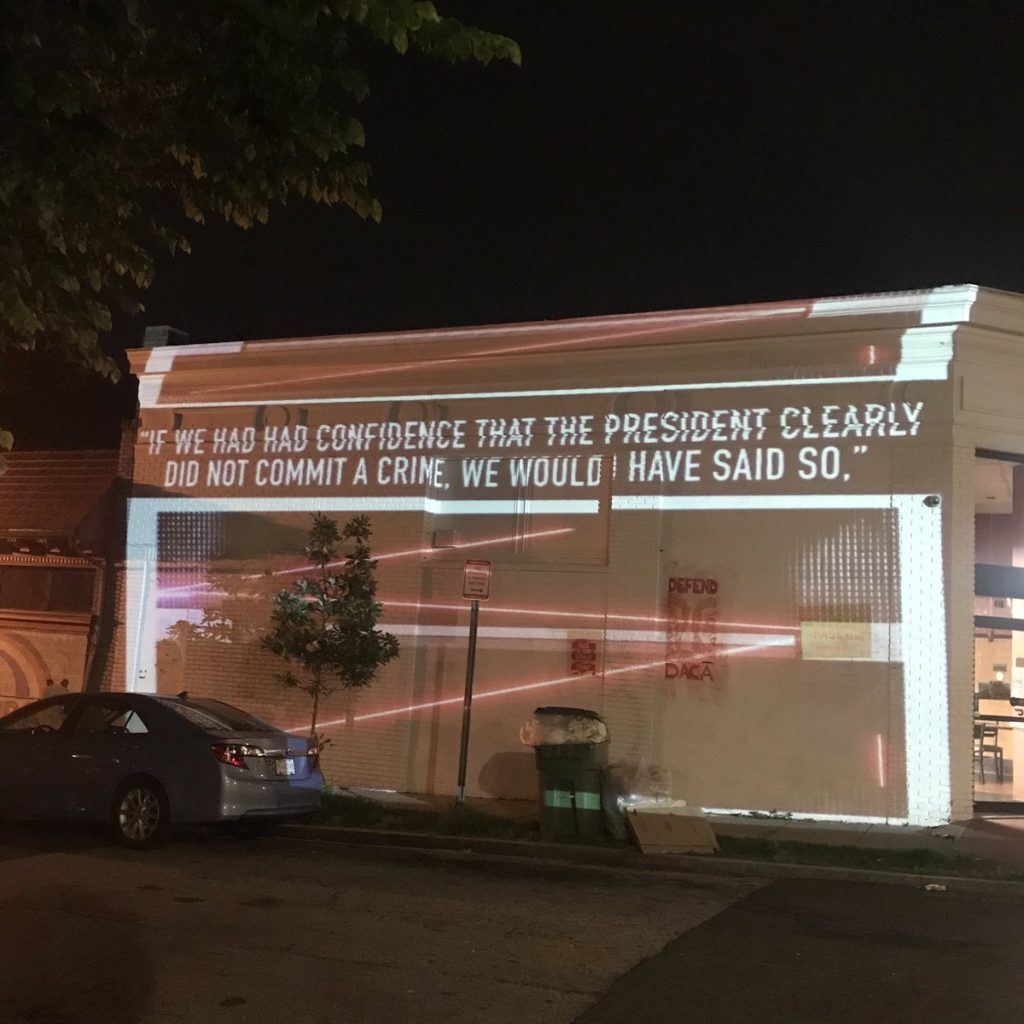 Thanks to Chelsea for sending last night from Mt. Pleasant and Kilbourne St, NW on the side of the Subway. Projection by Robin Bell‘s Bell Visuals.