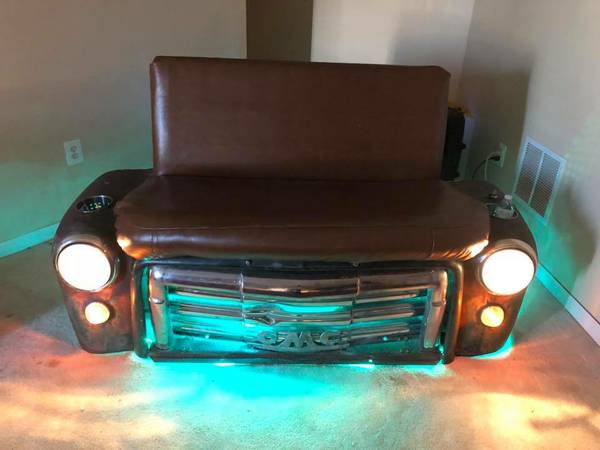 Spectacular. Thanks to Victoria for sharing her find on Craigslist:

Here is a quick rundown:

Lights up, rolls, changes beat with the sound of music or can be put on fades, flashes or a solid LED color. Super structurally sound, all the light work via a wall outlet and powered on by a car key. Drawer in the back for storage and clean wiring. All work done by Furhad Nasserjah, 21 year old local artist to Woodbridge VA.

Below are details on what exactly was done:

I started with a 1948 GMC truck. It started off as a full car in the backyard of some guy in PA. He chopped the car in half with a torch and about 10 sawzall blades. I also got a 70’s Chevy bench seat from him and a few other odd and ends. The car was completely stripped of extra weight, and rotted metal. Vital parts of the car painted with rust reformer then the entire car matte clear coated. Two layers of metal bracing were welded in between the fenders, as were many layers of “intricate” welded metal rebar to provide structural support for both the car sheer metal, holding the couch, holding the grille, and eventually holding a small cabinet in the back. Now onto wood, I cut out a small cabinet and placed it underneath the bench seat and that is where all the wiring is neatly kept and centralized. The bench seat was also welded to the frame, as was the grille. I then made foot pegs to ensure the couch wouldn’t tip over if someone were to jump onto the couch, as well as to make the seat parallel to the floor. I also made some smaller triangle footpegs on each side of the fender to make sure it was sturdy enough to allow people to sit on the fender. The fender lights were removed, and cup holders were installed with holes that allow led lights to shine through. I also cut the GMC logo out and shortened the header panel so your thighs wouldn’t be rub-a dub-dubbing against it, and re-welded the logo to the front chin spoiler. I then cut out a backing board for the couch out of a giant sheet of steel sheet metal, welded it to the fenders and to the frame of the 70’s couch, and also made and welded brackets underneath the car to hold the backing for assurance. I installed hidden wheels underneath the front chin spoiler to allow you to roll the couch easily and also welded a handle to the back of the steel backboard to allow you to lift the couch from the back and roll it using the front wheels. I also welded brackets to the back of the steel backing and made a little door with a handle and holes in it so you can peek at the led lights inside. Even things as simple as putting in new headlights and turn signals turned to be a huge headache because the headlight buckets were so rotten I had to make a custom bucket to hold the lights, then a custom hidden bracket to hold the headlight chrome bezels in place. Now to my favorite part, wiring. I wanted everything to work without a car battery, and instead to use a wall outlet. So I first bought new wiring harnesses for the lights, then wired both headlights together and both turn signals together. I ran the power from a wall outlet to two transformers that reduced the voltage from 120v to 12v and set the proper amperes to get the lights to work. I then installed the led lights, and zip tied them all around the car to keep them taught, visible, and clean. I also installed a module to allow the lights to either be set on color fades, jumps, or solid Colors, as well as change with the beat of the music (as in the video). I also wanted to make sure there were multiple plugs sticking out of the cabinet so I got one of those long vertical thingies that allow you to plug in multiple wires to it. I lastly wanted to make all the power to come on via a key just like a normal car so I ran the power from the wall to the key then that went to the vertical thingy, which went to each individual wire, which went to transformers if it needed one, then to each respective light. All wires were soldered and taped. Now to the biggest pain in the koon, upholestry. The seat I originally had from the 70’s truck was too small and too close to the floor, and would’ve required me cutting the grilled and the header panel to make it fit, so instead I cut a wooden board to fit the contours of the car, put foam on top, stitched the foam together, to again fit the contours of the car, then stitched the leather to make it fit the cushioned seats. I also used wood for transition flooring to make borders for the leather in the back as well as “hold it down” and keep the leather taught. I also wanted to stick with all car parts and wrapped the outside of the cup holders and key switch/ignition switch with butyl windshield tape, to provide extra assurance they’re sturdy, and plan on wrapping it with another layer of trim guard for cars to clean up the edges a bit. This is all that I remember right now, but hopefully I’ll be posting a documentary style video showing all the things I did.”

Read more →
More Stories
Today in Hawks around Town – “Looks like he caught something.”Where’s your favorite spot to take in some art?