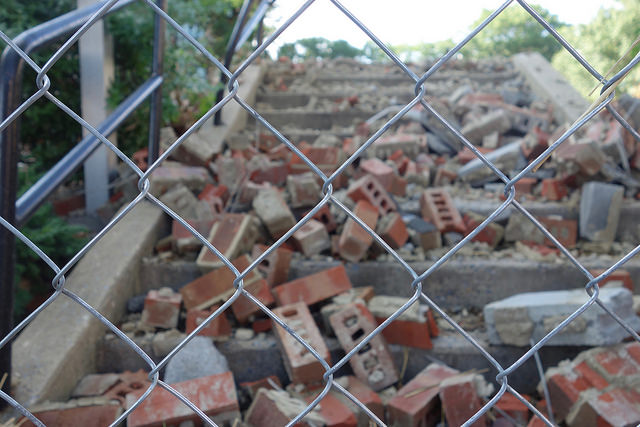 “My neighbor lives with her toddler grandson and others in the basement unit of a group home. Last night she called the fire department because her living room was flooded by a faulty heating system. When the firefighters left they said her landlord needed to fix the faulty system and address electrical issues in the unit. While I was talking to her she mentioned that loose bricks had also fallen from the ceiling and there was a tree (!!!) growing in her grandson’s room. She said that the unit has repeatedly flooded but the landlord has refused to address the problem. Today the maintenance company came but she said they did nothing to fix the faulty heating system–they just sucked up the water and cut out the wet carpet.

She said that she feels sick every time she walks into the unit and has been throwing up a lot. Sounds like mold.

I’m a landlord (with a C of O and an attorney-provided lease) and everything she describes seems like a major violation of DC tenants’ rights. She has repeatedly tried to get them to fix major problems with the unit and they ignore her or do something to cover the problem but don’t solve it and it reoccurs.

I suggested she call the DC tenant advocate and/or ask the city for an inspection and she called them and many others in the DC government, but all said they couldn’t help her because the unit wasn’t registered with them. But she and I agree that that doesn’t make sense because the trust that owns the house we think gets a major tax break from the city for making low-income housing available in Dupont Circle. My understanding is that even if a unit isn’t registered the city would still investigate violations–and would fine the owner for not registering the unit.

Any suggestions for advising her how to proceed? I’m happy to make calls for her, but she does not have the money to hire a lawyer or other advocate and she is unaware of her rights.”

Read more →
More Stories
Heads Up Brookland Metro Riders – Update: Service Restored“DCPS Chancellor Kaya Henderson and I announced that she will be leaving her role on September 30”