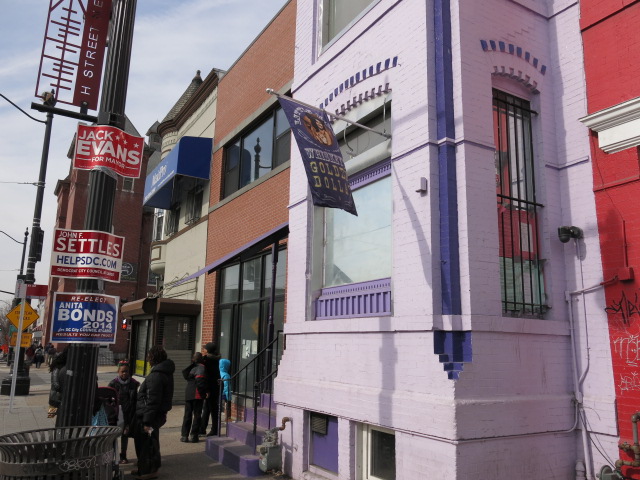 On Saturday, my friend had one of her first nights out since giving birth to twins in December. We met girlfriends for dinner and then planned to go dancing on H St. Since my friend is nursing, she had to pump milk before we left the restaurant, and she had a small bottle of milk in her bag when we arrived at Little Miss Whiskey’s. When the bouncer looked in her bag, he examined the bottle, and she explained that she was a new mom.

“No disrespect for your condition,” the bouncer responded, “but this is a bar. Why would you bring that here? It’s weird.” He added that Little Miss Whiskey’s doesn’t allow “outside food or drink.” He said he needed to ask his manager whether my friend could enter the bar with milk in her purse–and when he returned, he said she couldn’t.

We asked to talk to the manager, who was surprisingly hostile. He told my friend she could give him her breast milk to keep behind the bar but couldn’t have it in her bag, adding “We don’t allow those devices.” (I assume he was referring to breast pumps?)

To be clear, my friend was not trying to bring a baby to a bar or even discreetly pump milk in the bathroom–she was just trying to hang out with friends while carrying a (small, sealed) container of milk in her (zipped) purse.

We went to Rock & Roll Hotel instead, where they checked my friend’s bag and let her in with no hassle. I’m not sure if Little Miss Whiskey’s thought we had devised a very weird scheme for sneaking liquor into their bar or just doesn’t want moms there on a Saturday night, but they embarrassed my friend.”

“* Marc (the “bouncer”) never said “No disrespect for your condition, but this is a bar. Why would you bring that here? It’s weird.” That statement was made by someone on the sidewalk not related to the business (details re: Marc below).

* Gregg (the “manager”) was polite. He was apologetic in his attempts to explain policy. He was never “hostile”. He offered to keep the milk safe behind the bar (yes, “safe”, because contrary to evident suspicions we do not harbor any desire to tamper with someone’s breast milk (details re: Gregg below)).

* Our business licenses are common. Those licenses prohibit outside alcohol being brought in by patrons. Any kind of liquid can have alcohol in it. It is not up to us to interpret either the law or what the contents of any liquid are, and, sadly, there is no end to the nonsense patrons will attempt in order to bring their own alcohol into an establishment (yes, in a shampoo bottle, and that’s exactly why bags are checked, and exactly why we adhere to rigid policy).

* ABRA regularly sends undercover persons into liquor-licensed establishments to check on whether their laws are being enforced. That’s their job. It is our job to enforce those laws so the business doesn’t get fined or shut down, as well as so employees don’t lose their jobs.
There is no way for an employee to *know* what bizarre circumstance calls for an exception. Therefore, there are no exceptions.

* After the woman who wrote this letter to PoP (and also sent in her one-star review on Yelp) screamed at Gregg “YOU WILL NEVER HAVE ANOTHER WOMAN IN THIS BAR AGAIN AFTER TODAY”, a nearby person on the sidewalk said “oh bitch go protest somewhere else”. I write this because I anticipate she will levy more false allegations, and I want to make it clear that neither Gregg nor Marc made any comments that were embarrassing to the woman with the breast milk or her “friends”, much less rude or mean-spirited. No other employees were involved in this situation. If someone made an ugly remark, it was not an employee of LMW.

* I could attempt to placate all those concerned by publicly apologizing for how Marc and Gregg handled the situation, but I will not throw them under the bus. Allegations that they were rude, or impolite, or tried to embarrass anyone, are simply untrue. The “friends” of the woman with the breast milk made the situation loud and embarrassing, and Marc and Gregg remained composed even as the women screamed at them. I know I risk further public outrage by stating that I am very proud of how they handled the situation, but they were stuck with an impossible and bizarre circumstance in the middle of the busiest night of the week, and I am genuinely heartbroken to see their respective characters so wrongly called into question like this.

* I encourage anyone to please come meet Marc and Gregg (who happen to be brothers). Marc checks ID’s (and your bags) every Friday and Saturday night. I am certain you will immediately realize that he is a soft-spoken man who does not make incendiary comments, much less even raise his voice. As one friend commented about this situation, “Marc doesn’t talk like that”. Gregg bartends every Monday and Wednesday night. He regularly works weekends as well. I am certain you will find him polite and positive, just as he has been since he began working with us four years ago. This is one of the many reasons he has the keys to the business and is a signor on its checking account.

* Lastly, I know Marc’s and Gregg’s mother is an impressively accomplished woman- in both business and family- for whom they have tremendous respect. She raised her sons to treat people with respect, which I know because they have spoken of it and because they act like it.