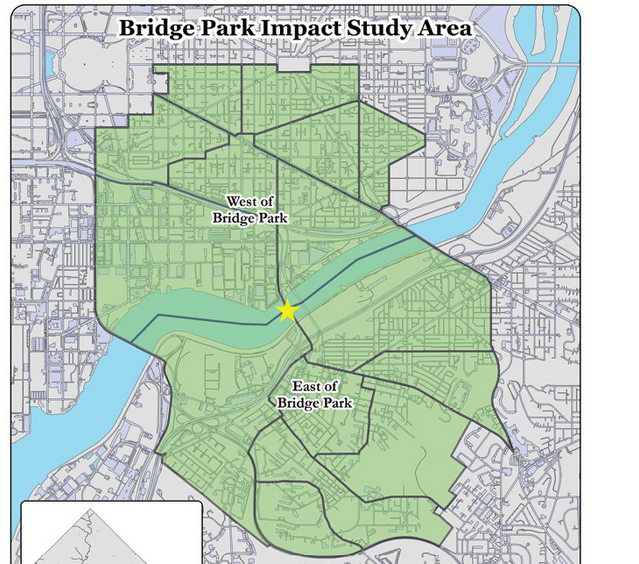 “As part of a year-long community-led effort, the 11th Street Bridge Park releases an Equitable Development Plan to ensure that nearby residents can benefit from this new civic space. The Bridge Park’s Equitable Development Task Force, formed in the fall of 2014, has worked with community residents, business owners, policy experts and government officials to identify actionable recommendations that the Bridge Park and its partners can take in three areas: workforce development, small business enterprise and housing. The Task Force has developed an Equitable Development Plan comprised of 19 specific recommendations encouraging inclusive development in the neighborhoods surrounding the park.

The Equitable Development Plan is available here to view online and here to download.

With the release of the Equitable Development Plan, Bridge Park staff will partner with experts from the Urban Institute to create measureable and detailed outcomes for each recommendation. Implementation of the recommendations has already begun. In early 2016 for instance, the Bridge Park will provide financial support for a new East of the River Home Buyers Club run by MANNA. The Home Buyers Club offers free high-quality financial literacy training and homebuyer education services with the goal of helping low and moderate income persons acquire quality housing and build assets for families through homeownership.

The Equitable Development Plan supports the unprecedented $100 million investment made by the Mayor of the District of Columbia, Muriel Bowser and the D.C. Council in the Housing Production Trust Fund, an effort to create a more inclusive city.

Economic development is one of four key goals of the 11th Street Bridge Park, a project of the Ward 8 based non-profit Building Bridges Across the River at THEARC. While the Bridge Park’s design strategies will increase connectivity and interaction between those living on both sides of the Anacostia River, more must be done to ensure that residents and small businesses near the Bridge Park impact area will continually benefit from the success of this signature new civic space. The 11th Street Bridge Park has the potential to represent more than just an innovative public space, the Bridge Park can symbolize a new unity and connection between a booming area of the city and one that has long been overlooked and excluded from the city’s economic progress.

A recent HR&A economic impact study found that property values in comparable park developments increased by 5-40%, so it is essential to strategize an actionable plan early in the process. In February, May, June and October 2015, the 11th Street Bridge Park convened over 200 community members and stakeholders to discuss and prioritize strategic recommendations to ensure that the new park will address potential economic displacement. Following these community meetings, the Bridge Park posted draft recommendations online for public feedback for two weeks. On November 5, 2015, the final plan was presented at City First Foundation’s Community Development Finance Conference.

By following a community-driven and vetted process, the Bridge Park can become a helpful example of how the public and private sectors can invest in and create world-class public space in an equitable manner.

About the 11th Street Bridge Park, a project of Building Bridges Across the River at THEARC

As the old 11th Street traffic bridges that connect Washington, D.C.’s Capitol Hill and historic Anacostia neighborhoods have aged out, a local non-profit, Building Bridges Across the River at THEARC, and the District government are transforming this old infrastructure into the city’s first elevated park: a new venue for healthy recreation, environmental education and the arts.

The 11th Street Bridge Park will be a place unlike any other in Washington, D.C. – one that supports the community’s physical, environmental, cultural and economic health. After a seven-month design competition informed by more than 500 community meetings, the design team of OMA+OLIN was selected in October 2014. With the design in place, Bridge Park staff has launched a capital campaign to construct this new civic space, securing more than $10 million to date. For more information and to see the OMA+OLIN renderings, visit www.bridgepark.org.

Building Bridges Across the River also manages The Town Hall Education Arts Recreation Campus (THEARC), a $27 million, 110,000 square-foot campus located east of the Anacostia River in Washington, D.C.’s Ward 8. The mission of THEARC is to improve the quality of life for residents of Washington, D.C.’s East of the River community, a key goal of the future 11th Street Bridge Park.”