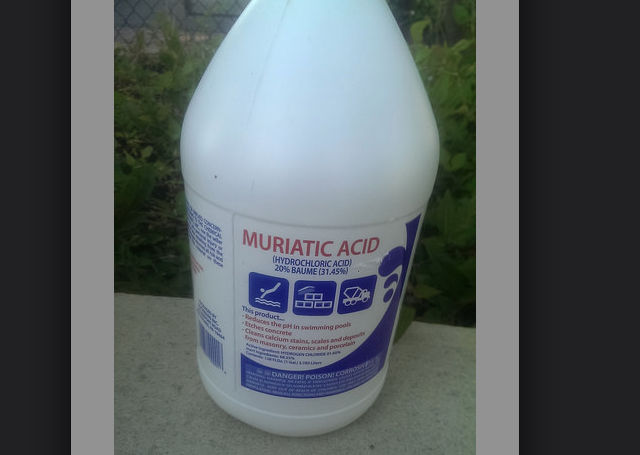 “This afternoon [Sunday] I took my 2 year old son to the Petworth water park– the one at 8th and Taylor – for its first open weekend. It was packed. Frequent visitors to that water park may notice that (what I assume are) the filters/pumps are located in the corner under large green lids a few feet from the edge of the paved play area. Next to one of these lids, towards the fence, was a white jug. I thought nothing of it since kids bring all kinds of containers to the water park. But when my little boy went over there, I followed because it had the look of a pool chemical container. I’m glad I did because it when I picked it up and, assuming it was actually full of water, sniffed it… Whoa! not water! My nose and eyes still hurt an hour later. It was a nearly full jug of muriatic (hydrochloric) acid with no top on it! (Photo attached.) This is dangerous stuff, very poisonous, and can cause serious damage to eyes. It etches concrete and cleans calcium stains and, as the photo shows, is used as a pool chemical (diluted in the water), which is why I imagine it was there. The jug is emblazoned in big red letters with: Keep away from children! With little kids running around dumping containers of water on eachother, imagine what would have happened if a 5 year old had dumped this on themselves or a friend!

Clearly this chemical was used by city workers/contractors when they turned the water park systems on to prepare the water and it was carelessly left there. Since no one was staffing the park’s building on Memorial Day, I reluctantly dumped the chemical down a storm drain and disposed of the container.

Assuming my guess is right and this was left by city staff when they turned on the water system, it was an incredibly negligent thing to do and could have ended with a very serious injury or even a poisoning death. I’m putting this is in writing to the city as well.”

Ed. Note: I think this is the actually 25th annual lighting. From a press release: “The holiday season is upon us once again and so is the 24th annual Norwegian…

Thanks to Molly for sending: “This is Indy, and she was spotted in Logan Circle. This sweet puppy is available for adoption through The Little Black Dog Rescue.” *This series…

Read more →
More Stories
“How Do You Fix a Hated Pop-Up? With an Eye-Catching Mural!”Rolling Thunder 2015