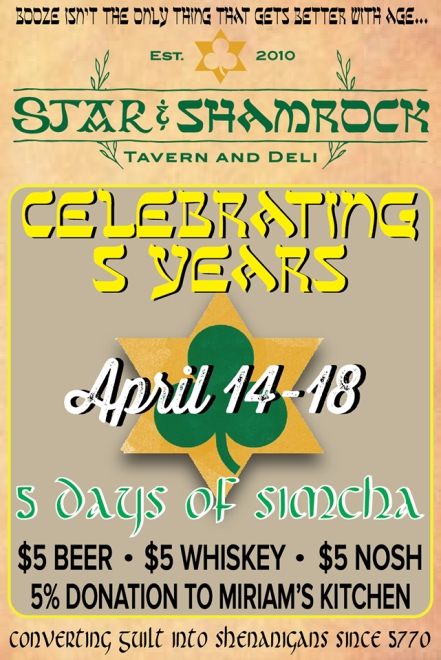 “In the theme of “5” each night of the “Five-Day Five-Year Anniversary Simcha” is set to thank patrons while introducing them to its “all grown up” menu and cocktail options. From Tuesday, April 14th through dinner on Saturday, April 18th, patrons will enjoy nightly $5 appetizer and 50% off entree specials off Star and Shamrock’s new menu, as well as a selection of five drink specials all for $5 each. In addition, 5% of all proceeds will benefit Miriam’s Kitchen. Plus on Saturday April 18th, DC’s favorite classic Irish band The MollyHawks will be onhand to mark the night of the actual anniversary with live music. And each night will be peppered with various revelry and surprise giveaways.

Nightly Menu specials will include:

Star and Shamrock will also mark its upcoming anniversary weekend with the introduction of its first full weekend Brunch. The 11:00 a.m – 4:00 p.m. menu will offer a wide selection of delicious Irish-Jewish spins on classic favorites, such as Salami & Eggs, Sunny-Up Lamb Burger, Lamb Sausage & Egg Irish Breakfast, Matzo Brei, and of course Reubens and other deli-favorites. And as always, it will also serve from its a private stash of baked-on-premises Bullfrog Bagels with its own House-Smoked Salmon. And true to its cultural line-crossing, the bar will be serving up “Bloody Molly” and “Bloody Miriam” Irish and Jewish takes on traditional Bloody Marys.”