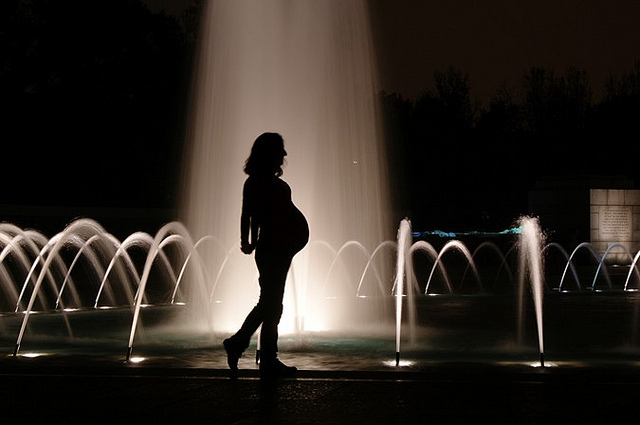 The Heights’ lame “I’m so sorry” to a pregnant woman:

“I have been living in Columbia Heights since 2008 and take pride and comfort in the neighborhood vibe of our establishments. I am now six months pregnant (with twins, and so I look a bit bigger!) and have a new-found appreciation for this vibe – Room 11 and The Coupe have been particularly wonderful, e.g. bringing orders that they normally leave at the counter to where I am sitting.

Which is why I was shocked by The Heights’ response to me asking to use their restroom last Saturday during a trip to the farmers’ market. No, I wasn’t patronizing the place – I do go there often enough, but I don’t think being a regular is the issue. The issue is honoring and accommodating mothers-to-be. I respectfully asked the hostess if I could use the restroom (I wanted to tell her that I did go around 4 times before I left my home, but that I drank a lot of water because I had calf cramps…but decided that was TMI). The hostess asked me if I was sitting outside on their patio and when I said no, she gave me a fake “I’m so sorry.” I was in such disbelieve that I just mumbled, “are you kidding me?” before walking out. When I told my partner, he immediately went in to talk with them. He spoke with the manager, who told him that they had a recent experience with a pregnant women who they let use the restroom, but who made a mess.

When the manager started apologizing to my partner, he asked if she was sorry enough to actually let me use their facilities. She reluctantly acquiesced.

The Heights is not obligated, of course, to let a non-patron use their restroom. And in fact, we can say that this is a perfectly valid business decision. But it is really? The Heights brands itself as a progressive, neighborhood spot– distinct from the chain establishments on 14th street. I don’t think their response to a desperate pregnant woman’s modest request is becoming of this image.”

Initial replies after the jump.

I don’t think you have grounds for complaint here. If you are in need of the facilities and are resolved not to purchase anything, Target or Giant are much better bets in that area. Or you could shell out $1.50 for a bottled water/soda/pastry at one of the many fast food/takeout joints on that block and use their restroom. Strolling into a sit-down restaurant seems like an odd choice. The hostess was just doing her job–she doesn’t determine the restaurant’s policy and probably doesn’t have a lot of latitude for judgment calls. Moreover, your lifestyle choices don’t entitle you to use any bathroom you please. Those businesses pay for toilet paper, soap, water, electricity, employees to clean their restrooms…why should they let random people off the street add to their operating costs? Sure, it would have been extremely nice of them to let you in immediately, but they were perfectly within their rights to ask you to go elsewhere. And it sounds like they eventually let you use the facilities anyway, so I really don’t see what the issue is. They did accommodate you, and you still felt the need to complain about this non-incident on a public forum?”

I respect your opinion, but my point in posting was to express disappointment in the failure to accommodate pregnant women (compared to establishments that do so). It is exactly as you said–a business decision–and I am questioning that. In doing so, I am making an overall point about the way we choose to express our values. I once saw a sign in front of a cafe (not in DC) that offered free tea to breastfeeding women. There are values that even businesses can espouse.”

I don’t think the comparison between the Heights and the Coupe/Room 11 is an apt one — the Coupe and Room 11 were accommodating you when you were a paying customer.

It’s a nice gesture that the non-D.C. cafe you mentioned was offering free tea to breastfeeding women, but I imagine they probably anticipated that the tea-drinking women might purchase pastries and/or they saw it as a promotional move.”