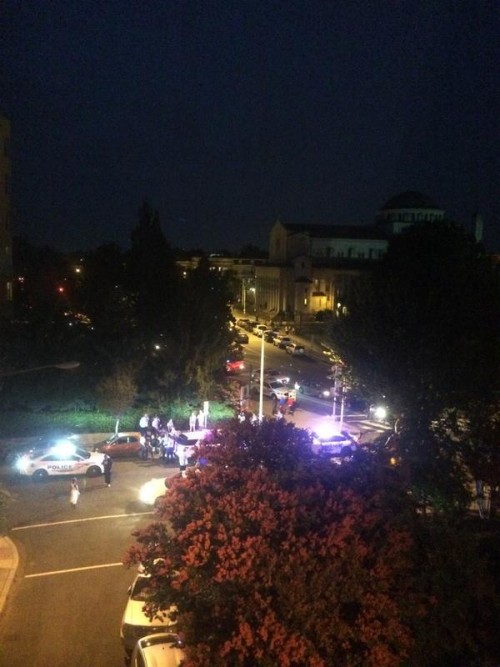 First the (relatively) good news: ‏@ScoMoses tweeted us the photo above around 10pm from 16th and Lamont St, NW.

“On today’s date, at approximately 20:45 hours, an adult female victim was robbed of her purse at the intersection of Park Road. Frand Hyatt Place, NW. (Robbery Snatch).

Upon observing the robbery, several concerned citizens pursued the suspect on foot and apprehended him in the 1600 block of Lamont Street, NW and held him there until 3D VICE arrived. The victim identified the suspect at time of stop and members of 3D VICE placed him under arrest for “Robbery”.

The citizens in this case should be commended for their utmost bravery, assistance to MPD and their compassion for the victim. Great Job D.C. Citizens !!!”

Now for the less “good” news: Around 10/10:30pm I also received multiple reports along the lines of:

“Around 100+ people just streamed down from Georgia and Varnum with 10+ cop cars in tow making crazy sirens – half the crowd was running for their lives, half walking. Pretty intense. Cop cars still straggling here. Any intel on what it was???”

I have seen no reports from MPD but will try to find out more.

“an establishment (5100 blk of Georgia Ave) held a youth birthday gogo party …. The venue had vast fights and was overcrowded, thus MPD had to disperse the crowds which fled into the street …down the street and to the Metro area…. We have asked both DCRA and ABRA for a review of said license and we took a report … 2 officers were injured as well to control said crowd.”