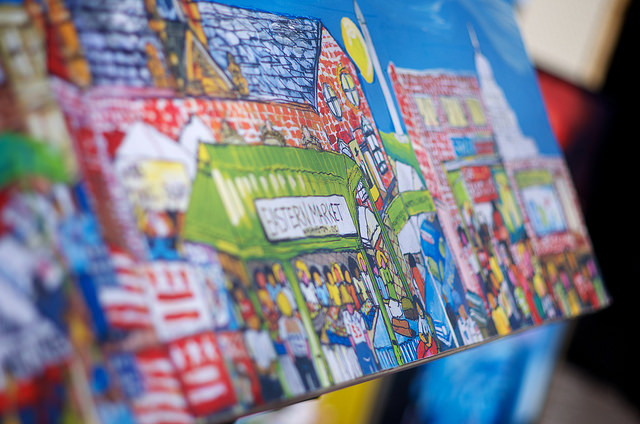 Ideas for “best of both worlds” urban/suburban/small-town feeling neighborhoods?

“OK, I’m crowdsourcing this question to get ideas for DC metro-area neighborhoods to explore that offer similar features to a city neighborhood, but maybe with a quieter or more relaxed environment. Reason being, my bf and I have talked about getting a place together (renting) in the near future, and we have pretty different tastes and needs in neighborhood. I’m a fairly die-hard urbanite, currently living right at the borders of Adams Morgan, Columbia Heights, and Mt. Pleasant, and in a perfect world we’d stay right in that neighborhood. (Well, in a truly perfect world, we’d stay in that neighborhood AND it would be more affordable, but…alas.) I love being near Rock Creek Park, the zoo, the green line, a handful of buses that go within a few blocks of my office, a supermarket, restaurants, etc. He, on the other hand, is kind of a suburban boy, or if he really had his druthers, would probably live in the exurbs or the middle of nowhere.

For various reasons that I won’t go into detail about here (other than to say that he has way less attachment to location/neighborhood than I do), he IS willing to compromise substantially on location, and we may yet end up staying in the Mt. Pleasant/Columbia Heights area. However, I would also like to explore alternatives so that I don’t have to ask him to make 100% of the sacrifice while I make 0%. I recognize that this “best of both worlds” neighborhood may not exist and that we can’t both have everything on our wish lists; there will need to be compromises all around.

MY wish list is: 1) Walkable, and accessible to transit (I don’t have a car), either a bus line or Metrorail line into downtown DC/Farragut area. (And by “walkable,” I mean Columbia Heights-level walkable, not that the neighborhood needs to have as much stuff around as CH, but similar proximity to stuff. I feel like walkable has become such a buzzword that real estate listings will call a place “walkable” if the closest thing you can walk to is a strip mall 15 minutes away, with a CVS and a Subway, and that’s pretty much it. I’m exaggerating, but you get what I mean.) 2) Also, no extreme commutes or commutes involving a commuter bus/rail (been there, done that, made me want to crawl into a hole and die. Unfortunately, that rules out Baltimore, at least for the time being until my job situation changes). I’d like to keep the commute under an hour, door-to-door. I don’t mind a “quaint” instead of “edgy urban” neighborhood vibe, but…how do I put this? My other big thing is avoiding a neighborhood that feels…sterile, you might call it? (For example, I’m sure that Crystal City has its merits and there are people for whom that neighborhood meets their needs, and that’s all good. But it’s not for me.)

HIS wish list is parking that’s not a total hassle, and he also likes newer construction and apartment amenities like in-unit washer/dryer, central air (I don’t care about those things, live currently in an old building, and prefer “character”–but again, we’ll need to compromise.) He would also love to NOT feel as though he’s right in the middle of a city. (On that note, to ME, Mt. Pleasant doesn’t feel as though it’s in the middle of a city…but I think he thinks otherwise.)

And our biggest shared wish-list item is probably a pet-friendly place–or at least, pet-tolerant. (In other words, I don’t need a building to fawn over pets, just allow them, as we would like to get a small/medium dog, 25lbs or so, at some point soon. And a place, anyplace, to take the dog out to poo would be great…and rest assured I am scrupulous about cleaning up after dogs!!) Family/kid-friendly? Hm. We might want kids at some point (after the dog), and I certainly don’t mind a family-oriented neighborhood (we are mid/late-30s, and never been hugely into the party/nightlife scene), but since I’m just looking to rent, I’d say school-quality and kid-friendliness aren’t must-haves for right now.

Read more →
More Stories
Photos from PoPville – Up and DownDear PoPville – Exterior Painting Recs and Does Paving a Driveway need a Permit?