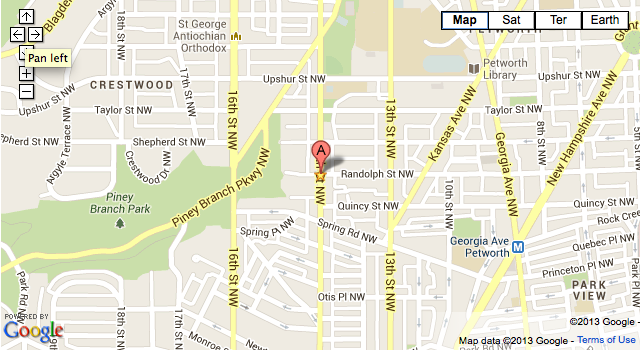 “Shortly before 2 AM on November 4, 2013, MPD units received a call for the sounds of gunshots in the vicinity of 14th & Randolph Streets, NW. Upon their arrival on scene, they located an adult male victim suffering from an apparent gunshot wound. The victim was transported to a local area hospital for treatment. A lookout was provided for 2 Hispanic males, one was approx. 5’5-5’6” tall, wearing a white polo shirt with an orange stripe, and the other was approximately 6’ tall with a blue button-up shirt.

Fourth District detectives are actively investigating the case. Anyone with information regarding this case is asked to call (202) 727-9099 or send a text to 50411.”

Thanks to all who sent links to the Washington Post’s Shots heard around the District:

“The District’s ShotSpotter has detected 39,000 outdoor gunshot incidents in the past eight years. Sensors cover about a third of the city and are concentrated where gun crime is highest.”

Read more →
More Stories
Looks Like Dunya Restaurant and Bar Will Be Opening Any Day at 801 Florida Ave, NWRandom Reader Rant and/or Revel