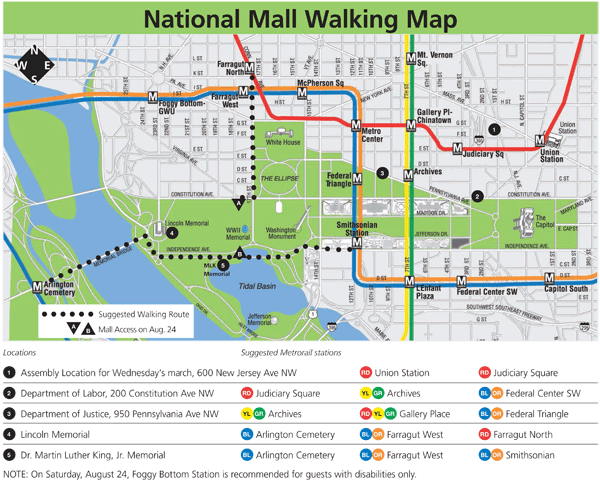 Metrorail will open at 5 a.m. and close at midnight (normal hours).
Trains will operate on a regular weekday schedule throughout the day.

For the Assembly Location at 600 New Jersey Ave NW, take Metrorail to:

For the National Mall, take Metrorail to:

Arlington Cemetery is not a recommended station, because Memorial Bridge will be closed to pedestrian traffic by US Park Police.

Smithsonian Station is not a recommended station due to the potential for crowding.”

“After an immensely successful Statehood Rally this past Saturday, which attracted over 5,000 participants, we have another opportunity tomorrow Wednesday to support our Mayor and your City.

Please join the closing ceremony of the 50th Anniversary of the March on Washington at the Lincoln Memorial at 11:00am on Wednesday, August 28, 2013
. Bring your DC flags and T-shirts.

The Mayor will speak approximately at 11:10am. President Barack H. Obama is also going to be among the guest speakers.”

Complete site and road closures from MPD after the jump.

SITE CLOSURES
These NPS sites will be closed beginning 4:00 a.m. on Wednesday August 28 until the end of the event expected to be around 4:00 p.m.

Road closures will include pedestrian closures at each closure site. Commercial vehicles will not be permitted on Constitution Avenue between 1:00 p.m. and 3:45 p.m.

In addition the NPS roads closed above – the Metropolitan Police Department will be closing the following streets beginning at 3:00 am and should reopen by 6:30 pm (Note, these are not indicated in attached map)