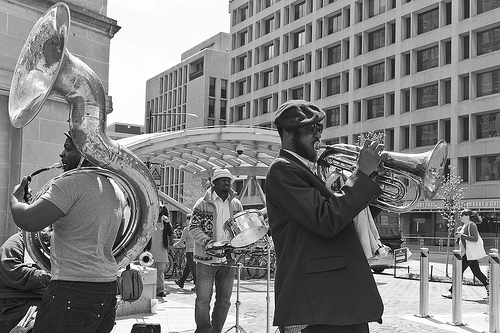 All good things must come to an end, and Metro’s spring break from track work is no exception. Following a four week reprieve from the massive rebuilding of Metrorail — a period during which 15 million rail trips were taken — workers are gearing up to resume the heavy construction activity that is critical to improving the safety and reliability of the transit system.

This weekend’s rebuilding work will result in service changes on all lines beginning at 10 p.m. Friday and continuing through system closing on Sunday night.

Free shuttle buses will replace Red Line trains between Gallery Place and Union Station as workers install 600 feet of new lighting fixtures between the tracks at Judiciary Square Station. The project is part of an ongoing effort to improve brightness and energy efficiency. Rail service must be suspended because the light fixtures are located within inches of both third rails.
Judiciary Square Station will be closed throughout the weekend.
Trains will operate as follows:
Between Glenmont and Union Station every 10 minutes during daytime hours and at regular weekend intervals at other times.
Between Shady Grove and Farragut North every 10 minutes during daytime hours and at regular weekend intervals at other times.
In addition, a special “shuttle train” will run continuously between Farragut North, Metro Center and Gallery Place. Customers traveling between these three stations and the western side of the Red Line should transfer across the platform at Farragut North to continue their trip.
Customers traveling between the eastern side of the Red Line and Downtown destinations may wish to consider using Green Line service between Fort Totten and Gallery Place as an alternate route.
Customers using shuttle bus service should allow 10 to 15 minutes of additional travel time.
Last train change: To allow for shuttle bus connections, the last train from Glenmont to Union Station will depart 32 minutes earlier than normal on Friday, Saturday and Sunday nights. The train will leave Glenmont at 2:05 a.m. on Friday and Saturday, and at 11:05 p.m. on Sunday.

Free shuttle buses will replace Orange Line trains between Virginia Square and Rosslyn to allow for track circuit replacement, a key NTSB safety recommendation.
Two stations — Court House and Clarendon — will be closed.
Trains will operate in two segments:
Between Vienna and Virginia Square every 15 minutes
Between Rosslyn and New Carrollton every 15 minutes
Customers using shuttle bus service should add 15 minutes to their travel time. Customers elsewhere on the Orange Line may experience a slightly longer wait on the platform.
Last train change: To allow for shuttle bus connections, the last train from Vienna to Virginia Square will depart 31 minutes earlier than normal on Friday, Saturday and Sunday nights. The train will leave Vienna at 2:05 a.m. on Friday and Saturday, and at 11:05 p.m. on Sunday.

Blue and Yellow line trains will single track between Braddock Road and Pentagon City as workers perform necessary track maintenance, including rail tie, fastener and insulator renewal.
Throughout the weekend, both Blue and Yellow Line trains will operate every 30 minutes.
Customers will experience this longer travel time on the platform. Once the train departs, it is not expected to experience additional delays en route.
Yellow Line trains will operate between Huntington and Mt Vernon Square only; customers traveling to/from stations north of Mt Vernon Square should use Green Line service to complete their trip.

Green Line trains will single track between Greenbelt and College Park to allow for rail tie replacement and renewal.
Trains will operate at regular weekend intervals between College Park and Branch Avenue.
Between 7 a.m. and 9 p.m., every other train will begin/end at College Park, rather than Greenbelt. Customers traveling to or from Greenbelt Station only should add about 15 minutes to their travel time.