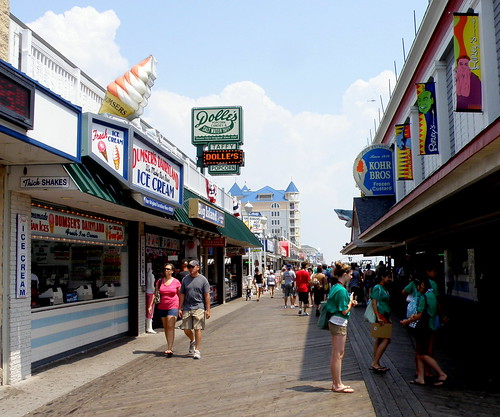 Dumser’s has been a part of the history of the Ocean City Boardwalk since 1939 ~ Dolle’s Candyland specializes in homemade salt water taffy Since 1910, originally uploaded by Robert Lz.

As a kid I loved Ocean City, MD. I remember scarfing down buckets of Fisher’s popcorn, Dumsers ice cream, chocolate strawberries from Candy Kitchen (what can I say, I was a hungry kid), then immediately racing off into the waves only to return 5 minutes later with a massive stomachache, and a craving for more popcorn. We’d run around all day and stop by the Gocart track on the way home to race off any excess energy before the long, slow trek home bumper to bumper with the other day-trippers who were too stingy to stay in a beachside hotel.

Yet I can’t stand the place now. Not to offend OC fans, I think the beach is a poor option for DCers to trek to when in need of sun. I went a little while ago to reminisce over my younger days face-first in a bucket of Fishers, and instead got a different taste of Ocean City – that tasted a little like brine. The boardwalk, which when I was a kid seemed like the yellow brick road, is now overrun by obese children. The beach is sardine-like crowded and filled with discarded Big Gulp cups and taffy wrappers, and just when you think you found an OK spot to squeeze into, you realize your neighbors are apparently into blasting Garth Brooks and not having a full set of teeth and screaming things like ‘WADE GIT YOR CIGARUT BUTTS AWF MAH TOWEL OR AH WEAL STICK THIS HERE UMBRELLU STRAIGHT UP UR…’

Also the attendants of the Ocean City rides really need to ease up on the Drakkar Noir.

Maybe there are hidden gems of the city that I haven’t experienced? But for now I’d pick Rehoboth, Assateague, hell even Dewey, over OC. What am I missing out on?