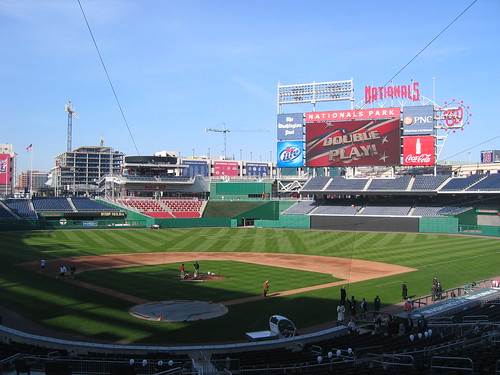 The Washington Nationals. The District of Columbia. Each a true reflection of the other. A match made in heaven – or hell, depending on your opinion of both. The parallels are startling, really. Their story is one of twins separated at birth only to reunite years later. One raised in DC, on borrowed land. The other, a country away in Montreal. Together again. At long last, together again.

It took time for the Nats to make this place home, as it no doubt took the Capital some time to come into its own. The seasons housed in RFK spent awkwardly, like wearing someone else’s shoes. The new stadium seemed to come out of thin air. Plop down it went. Just like DC itself, dropped in the middle of swampy wetlands. The only major metropolitan area and international powerhouse that developed a city around it, rather than the opposite; a powerhouse emerging from a developed city. It took the efforts of the entire Major League to bring one here. The other depended on the action of a strong centralized “federal” government. For those looking in, both concepts seemed somewhat half-baked.

So maybe you are growing convinced that the District and the Nats share a few traits. However, my argument thus far has been one based on generalities. What about the specifics, you ask. Well, consider the following:

(Former) General Manager, Jim bowden = (Former) Mayor, Marion Barry. So he was never actually convicted of corruption. That doesn’t stop everyone from accepting as truth that he was one corrupt SOB. One fell from grace via a prostitute and crack, the other over allegations of skimming bonus checks from dominican prospects. Either way, definitely not the guy you want steering the ship. Sure, they both have their apologists (more generously called “supporters”), but at the end of the day they will be remembered as those that brought shame upon their franchises. Thankfully, neither are still in charge, but the mess they left in their wake is visible everywhere.

Ryan Zimmerman = “Downtown Washington.” He is the “face of the franchise” – the first thing people think of when they think of the Nats. Everyone has a stake in his well being. He is also painfully expensive. You have to secure that kind of investment, so it doesn’t seem too out of the ordinary to see teams of heavily armed guards patrolling his perimeter. If you live here, you take him for granted. Don’t forget, franchise caliber third-basemen are hard to find, and not everyone has one. Every once in a while you remember he is down there and so you’ll go to simply gaze in amazement. Then the tourists start to drive you crazy and you head back up to the real part of town. There is something a little too easy or common about liking him. As a fan, you have way more street-cred if you like a guy like Elijah Dukes.  Continues after the jump

Elijah Dukes = Columbia Heights. Loads of potential, but every once in a while he does something like send a picture-text message of a gun to his girlfriend during an argument that makes you think, “I’m not so sure about this guy.” I’ll swear to anyone who’ll listen that he’s poised for a break out year. But ask ten people about him and you will get ten different answers. There’s a reason the Nationals got him on the cheap. Maybe the bet pays off. Maybe you’re left without a wallet. The early honeymoon had you thinking he would be an overnight success. After further review, you realize he is a long-term investment. Personally, I have learned to love him. I just need to look past a few things for that love to truly blossom.

Adam Dunn = Georgetown. High price tag, proven commodity, but would definitely rather be someplace else if he could. Since he is stuck, he will try to make the best of it, but don’t think for a minute he wouldn’t rather be a part of Arlington. Whenever anyone talks about him they will mention that he consistently hits 40 home runs per year. They will also conveniently forget to tell you that he is a below average fielder with something of a strike-out problem. Georgetown is really nice, with great restaurants, low crime, historic neighborhoods and recognizable sights. But those nifty guide books never warn tourists that Georgetown is filled with…well…the kinda guys that love Georgetown. So as great as it is, it still isn’t exactly perfect. On paper he brings the team up. In reality, we’re questioning his commitment.

Are you beginning to drink the Koolaid? Have I convinced you yet? Need more? Well, if he wants it, so he gets it:

The Fourth Inning President’s Race = Weekend Nights in Adams Morgan. Silly. Childish. But you find yourself enjoying the festivities despite your self-proclaimed “adult” status. One day you will be too old for this stuff. Right now you are cheering on Teddy Roosevelt with all your heart. Go! Go! Go! Chug! Chug! Chug! You get lost in it all. Time for a hot dog…or jumbo slice. And without fail, you wake up to the next inning – greeted by that inevitable hangover that is the sub-500 baseball season. Advil will not help; only time and ginger ale and perhaps football season. Teddy has lost again. You knew this would happen, but you got your hopes up anyway. He had an early lead. I really thought it would work out this time. When will I learn?

Manager, Manny Acta = Public School’s Chancellor, Michelle Rhee. Let’s be honest, both are doing commendable jobs with the crap they were dealt. Rising stars the lot of them. Brilliant, visionary – just a few words used to describe the two. In a better system, they could sit back and reap praise and reward. Instead they chose to accept a challenge. I fear our impatience for success will lead to their inevitable fall as scapegoats. However, if they can turn it around before time runs out they will go down in history as the best in the business. If they take too long fixing the mess that others created it will be “off with their heads!” A tragic story, really. I worry I already know the ending. Prove me wrong, Fate. Prove me wrong.

National’s President, Stan Kasten = Former Mayor Anthony Williams. Shrewd businessmen, but ambassadors first and foremost. Williams’ world tours touting the high points of DC were notorious, so much so he was criticized for spending as much money and time in other places as he did in the District proper. Kasten recently boosted himself to infamy by going on a Philadelphia radio station and urging Philly fans to come down to Nat’s Park to root on their Fightin’ Phils. Attendance to both was low. Someone needs to come here. Anyone. Even Philly fans.

Lastings Milledge = The Navy Yard Neighborhood. When baseball came to town, this guy was hailed as a steal of a prospect. A little rough around the edges, sure. But in time the development will come. Well, as of late we have seen a bit of a recession. Unfortunately, this recession has halted all that expected development. We have put a number of eggs in this basket, but that lump in our throat is one of concern; concern that we miss-judged or over-valued this guy. So it is off to AAA-Syracuse for a while. A dream project put on hold. Surely he will get back on track. Right? Please? I retain optimism. Again, it just might take longer than originally thought.

So the next time you find yourself scratching your head at the Nationals and the District, pondering how either have any fans, remember this: They truly are a perfect match. Whether you like one will surely influence how you perceive the other. Hand-in-hand, step-by-step, these two might as well be one. Together again.