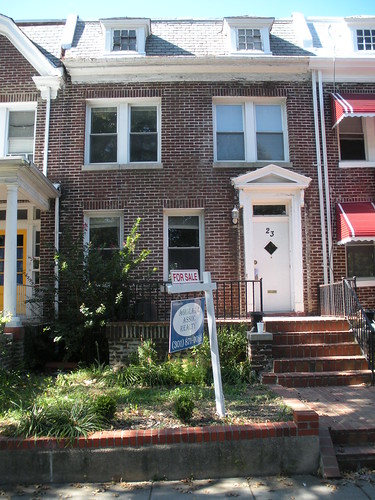 Apologies in advance, but due to previous weirdness from trying to make pretty links and then having them not work, I’m using plain old ugly long links.  But they should work.

This property is in very close proximity to last week’s GDoN Revisited, which makes it either interesting to consider OR maybe boring and repetitive?  To make a case for this being interesting, it has been featured by the Prince of Petworth not once, but twice already.

An astute reader happened to catch the foreclosure sale back in early December, which caused PoP to exclaim, “Holy Cow!” at the transfer price of $209,766.  The ensuing discussion can be found here: http://www.princeofpetworth.com/2008/12/good-deal-or-not-update-2/
Post foreclosure, the property was listed at $219,900. and quickly went under contract.  To provide some perspective, here is some comparable sales information for the surrounding area within the past 6 months (including last week’s GDoN Revisited, 139 Varnum St NW): http://matrixreports.mris.com/MatrixReportServer/CMAOutput/35904/CMA_Summary_Detail8603.PDF  (Click through to the second page to see recent sold properties).

I thought it might be interesting to consider the trajectory this property took toward the eventual foreclosure, since it is sadly not an unusual story. Continues after the jump.

2003: Property listed 4/30/03 for $280,000. and went to contract 62 days later at which time it was listed at $244,900.  Settlement was at full list price, however the purchaser received a subsidy of $7,497. at settlement.  At the time, the home had 1 full and 1 half bath, radiators, window a/c units and no central air.  The basement is described as finished.  Listing specifies that the property is being sold in AS IS condition.  The public records indicate that the purchaser was an owner occupant.

2006:  Property listed on 12/6/2006 for $455,000.  After several price reductions, it was withdrawn from the market 151 days later.  The listing indicated that an additional full bath had been added, as well as central air and heating, and “top of the line appliances”.  The other caveat is that apparently the renovations were started but not fully completed.  “Just needs your final personalized touches”.

January-October 2008: Property listed on 1/10/2008 for $399,000.  It remained on the market for 206 days, ultimately at the $325,000. price.  It was noted in the listing that at this lower price, a contract would be subject to third party approval, indicating a short sale (Seller owes more than current market value).  By this time, the listing also unfortunately indicated water damage from a “tank overflow”.

Early December 2008: Property ownership transferred to mortgage holder and re-listed as noted above.

Many of the homes that I see post-foreclosure were situations where renovations were undertaken, whether investor or owner occupied.  People may have gotten involved with contractors who took money and did not complete work, or renovations have cost much more than was budgeted for, as well as investors who have priced the re-sale unrealistically in relation to current market conditions.

In general, foreclosure properties that hit the market in DC typically move quickly, as in this case.  The foreclosure market has created opportunities for many buyers, and we’re seeing another wave of renovations.  Certainly there are areas affected more adversely than not by the presence of these properties, but there is clearly a significant amount of buyer interest in many parts of the city.