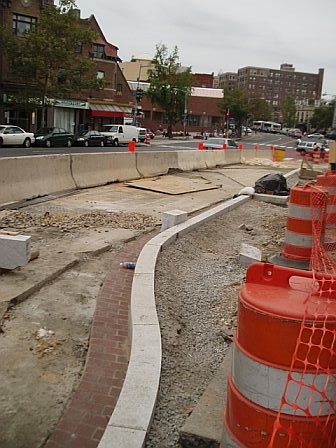 Ed. note: John does a phenomenal and thorough job detailing the changes coming to 18th Street. It’s hard to imagine what it will look like when completed. Do you think it’ll be an improvement?

Most residents agree that the sidewalks and intersections in Adams Morgan could do with a facelift.

On 18th Street the sidewalks themselves are too narrow to accommodate the crowds, especially over the weekends and particularly after the smoking ban banished tobacco aficionados to the sidewalks.

The intersections at Columbia and 18th and at Florida and 18th are generally considered pedestrian unfriendly to the point of danger with “slip roads” allowing cars to come from seemingly all directions and confusing even those walkers who try to obey traffic laws. (These “law-abiding” pedestrians can become fewer and further between as the night progresses and drinks are consumed).

Although the strip of 18th between Florida and Columbia is often derided as the locale of choice for “bridge and tunnel/VA frat boys/suburbanite interlopers” (feel free to add to this list of disparaging generalizations), the area is an important nightlife destination for Washington, DC and more importantly, the neighborhood is home to thousands of residents, many of whom do not own cars and rely on bikes, buses and pedestrian power to get around.

While most agree on the need for improvements, there remains a great deal of debate over what these improvements should ultimately look like and how the work should be carried out. Story by John continues with lots of details after the jump.
IMPACT ON LOCAL BUSINESSES

A similar project to improve the sidewalks down on P Street west of Dupont Circle is now complete and the neighborhood is certainly looking better for it. Yet local businesses complained that the time taken to do the work and the extent of the ripped up sidewalks that blocked entrances to buildings caused a massive, potentially fatal downturn in income.

At least one local business – a donut shop named the Fractured Prune – went out of business during the work and – anecdotally – the sidewalk reconstruction was blamed for their financial troubles.

While 18th Street will likely continue to generate enough foot-traffic even during construction to support the businesses on the street, these are legitimate concerns.

Another hotly debated issue is that of parking. Some local residents who don’t drive would like to see a reduction in the availability of parking. After all, fewer parking spaces will discourage people from driving to the neighborhood and encourage the use of public transport.

Residents who do drive naturally want to protect the existing parking spaces, fearful that changes on 18th may result in even more competition for scarce spots. Some local businesses argue that adequate parking is necessary to attract people from outside the neighborhood to frequent the bars, restaurants and stores. Others, already concerned that the traffic and the perception of unsavory crowds on weekend evenings are actually discouraging people from visiting Adams Morgan might argue for a reduction in parking or at least consideration of certain measures to make the area more pedestrian friendly.

While most of us would naturally support more aesthetically pleasing renewal – brick sidewalks, flower beds etc – we should also take into consideration the durability of this renewal, given the crowds that congregate in the area on weekends. On P Street there are already reports of deterioration to the re-laid brick sidewalks and in general there are questions about how long until new or refurbished street furniture (benches, tree boxes etc.) would deteriorate in the busy Adams Morgan area.

DDOT Recommendations – What Can We Expect?

A full copy of the DDOT 18th Street Transportation and Parking Study is available here: http://www.ddot.dc.gov/ddot/cwp/view,a,1249,q,636709.asp.

In summary, expect to see some of the following changes in Adams Morgan:

The DDOT report focuses on the two main “gateways” to the heart of 18th Street strip: the intersections at Columbia and 18th and at 18th & Florida, both of which are notoriously unfriendly to pedestrians.

This work is already underway, as you can see from the pictures:

In general these changes seem well thought out and represent a positive step for the neighborhood. No-one wants to live, eat, drink or make merry in a construction site, but hopefully the work will be completed as quickly and with as little impact as possible on local businesses and residents.

While I have an layman’s interest in these issues I have no expertise whatsoever in urban planning, traffic flow, beautification etc. so I’m looking forward to hearing from readers who are knowledgeable in this field or simply have their own opinions.